Amid the recent hysteria surrounding the finances of Greece, some promising news has gotten lost in the shuffle. The draconian austerity package pushed through by Athens last year has been remarkably effective in cutting the budget deficit -- slashing it from 15.4 percent of gross domestic product to 10.5 percent. Were Germany forced to make a similar reduction, it would require €125 billion in savings.

Furthermore, Athens has reformed its tax law, increased efforts to pursue and bring tax evaders to justice and radically slimmed down its public sector.

That, though, is only part of the story. Drastic spending cuts tend not to be good for the economy, and in the case of Greece, the economy has shrunk far more than experts had projected -- by 4.5 percent in 2010. This year, it is expected to contract by more than the 3 percent originally predicted. The country's debt burden now stands at 142 percent of GDP -- and climbing.

European officials now fear that Greece will need additional help in the near future, to make up for a financial shortfall calculated to be close to €30 billion in coming years. In late June, the European Union and the International Monetary Fund, which put together the €110 bailout package for Greece last year, will examine Athens' progress. "Then we will evaluate those results," Martin Kotthaus, a spokesperson for German Finance Minister Wolfgang Schäuble, told the Associated Press on Monday.

The financial markets think they already know what those results are going to look like. The ratings agency Standard & Poor's cut Greece's credit rating further on Monday and said the country is likely to partially default on its debt. Moody's is also looking at further degrading Greek debt. Already, the country would have to pay an astronomical 15 percent on 10-year bonds on the open market. For two-year bonds, that number is 25 percent. European officials had hoped that Greece would be able to resume financing itself on international financial markets by next year. That now looks to be out of the question.

And Europe itself hasn't exactly been helping in recent days. Jean-Claude Juncker, the Luxembourg prime minister and head of the group of 17 euro-zone finance ministers, has come under fire for his handling of a confidential meeting held in his home country last Friday evening. After SPIEGEL ONLINE reported that the meeting was taking place, Juncker denied it outright -- increasing the already substantial uncertainty surrounding Greece.

Juncker's denial was all the more consternating given that the SPIEGEL ONLINE report also cited German government sources that Greece was considering withdrawing from the euro zone. Athens promptly denied the report. But with Juncker's denial quickly proving to be inaccurate, the Greek denial was also called into question. The confusion resulted in a 2 percent drop in the euro-dollar exchange rate.

The Luxembourgian prime minister has also come under fire for a quote brought to light by the news agency DAPD. "When it becomes serious, you have to lie," Juncker reportedly said during a meeting in Brussels just before Easter. Explaining himself, Juncker said: "If you are pre-indicating possible decisions, you are fuelling speculation on the financial markets, throwing into misery mainly ordinary people whom we are trying to safeguard from this."

But he has been unable to safeguard himself from criticism this week. Martin Schulz, head of the Social Democrat block in the European Parliament, told SPIEGEL ONLINE on Monday that "those who organized the meeting (on Friday evening) managed to create quite a disaster. The way it was handled is another indicator for the fact that the euro zone is primarily suffering from political mismanagement."

"Because a Greek withdrawal from the common currency union and the European Union isn't an option, the only alternative left is a partial default -- which means nothing less than that Greece's creditors would have to renounce a percentage of their claims. That list includes banks both in Greece and abroad, in addition to the European Central Bank and taxpayers in Germany, France and elsewhere. This path too would be painful and risky, but it would at least give Greece the opportunity for a new beginning."

"But: Even if a partial default did not unleash panic in the financial markets, little would have been won as long as the encrusted structures of the Greek economy were not dismantled. Politicians and companies in Greece would have to settle on future-oriented sectors and invest in them massively -- experts point to logistics, ship building and solar energy as possibilities. It would also be sensible to liberalize the country's stagnant domestic services market. Athens, though, would not be able to do all this alone. In order to multiply the economic effects, the EU would have to provide hefty subsidies for private investors. As hackneyed as it may sound, Greece needs a kind of Marshall Plan."

"Debt restructuring will come sooner or later to Greece -- and by no means will it mark the end of the currency union, much less the European Union. The question is: Will such a step be enough? Is a Greek withdrawal from the euro zone really as bad an idea as Luxembourg's prime minister would have us believe? Without the euro, Greece would have better chances at a sustainable economic recovery. A strong euro hangs like a millstone around Athens' neck. With their own currency, one which represents the real strength of the country's currency, the Greeks could develop their economy and catch up with the rest of Europe. Following a Greek withdrawal, euro-zone member states ... would be bound to exhibit solidarity. Billions in aid could then be more effectively used than is currently the case."

"The euro was a political project from the very beginning. But the idea of a common currency has proven unable to counter the strength of the market in the long term. The risk that those countries providing aid wind up with their own debt crises is the real danger to the stability of the euro."

"The much better solution would be to reduce the interest rates required on euro-zone aid packages. If politicians were to bid farewell to their idea that interest rates on aid packages should have a punitive element, much would be gained, according to expert estimates. Cutting the interest rate in half, which would result in increased economic growth in Greece, would preclude the need for a restructuring of Greek debt. Even better would be if the European Union would accompany austerity measures with an extensive European program of investments, which would ensure both growth and goodwill."

"But the best solution remains a deepening of the European Union with the establishment of an economic governance and common fiscal policy. The crisis has shown that a currency union without political union is on the brink of failure in stressful times. And the costs of a disintegration of the euro zone show us in Germany just how much we should value the euro. Our euro."

"Today, exactly one year after Greece received an aid package worth €110 billion, it has become apparent that the rescue has failed and the country will not be able to get back onto its feet without restructuring its debt. As willing as the EU was to put together a new aid package, it is now ruling out a Greek default because, it is said, banks would begin to fall like dominoes. But the banks have long since transferred their problematic Greek debt holdings to the European Central Bank, which willingly took it on. The ECB has become Greece's largest creditor. Given the sums involved, one could almost say that the entire Greek banking system belongs to the ECB. Greek banks have refinanced themselves via the central bank to the tune of €91 billion. In addition, the ECB is thought to have bought up Greek state bonds worth €47 billion. A restructuring of Greek debt would be a catastrophe for the European Central Bank." 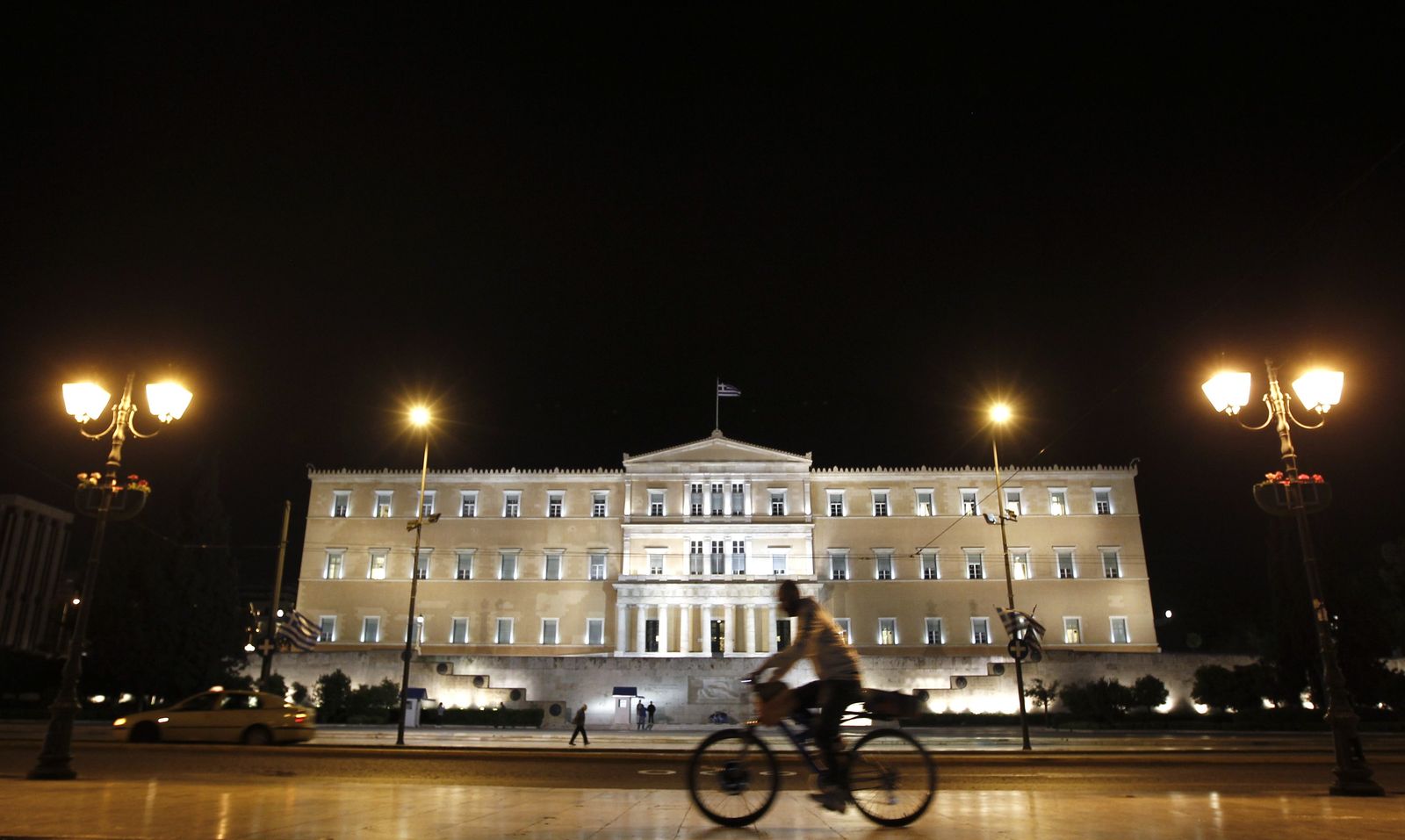 Greek finances are once again causing headaches in Europe. Here, the parliament building in Athens.