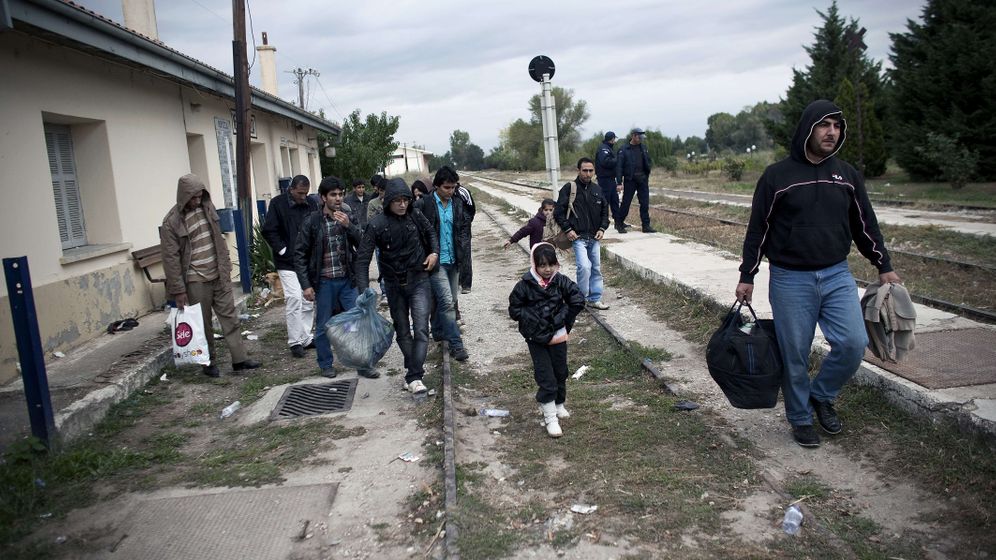 More than two decades after the fall of the Berlin Wall, Europe may get another concrete-reinforced border. On Saturday, Greece outlined plans to construct a fence or wall along its border with Turkey, the stretch of land where the majority of economic refugees enter the European Union.

Its proposal sparked vociferous international complaints. Then, on Monday, Greek government officials retracted their original plan for a wall along Greece's 206-kilometer (128-mile) long border with Turkey, saying they would instead build a defense along a 12-kilometer stretch prone to illegal crossings in the north-east of the country.

Greece has already asked for European help, saying it cannot cope with the surging numbers of migrants arriving illegally. According to Frontex, the EU border agency which patrols the area, there was a 369 percent increase in the number of illegal immigrants crossing the northern Greek border in the nine months to the end of September 2010, compared with the previous year.

In recent years, the land border with Turkey has become a vital gateway to Europe for Asian and African migrants. According to the European Commission, more than 80 percent of illegal immigrants enter the EU via the border with Greece, especially after increased sea controls.

Among a raft of criticism of Greece's plan, Brussels told Greece to work on its long-term strategy for its borders. "Fences and walls have proven in the past to be really short-term measures that don't really help address and manage the migratory challenges," a European Commission spokesperson said.

Amnesty International was among the human rights groups urging Greece to rethink its plan. "This is not going to solve the problem at all," Wolfgang Grenz, the deputy general secretary of Amnesty's German chapter, told SPIEGEL ONLINE on Monday. "Even if the fence is smaller (than initially planned), the problem remains. Making it shorter is just a gesture -- it's window dressing, not a solution."

Most German editorialists also take a dim view of Greece's planned border fence. Despite objections to the wall and fears about an emergent "Fortress Europe," commentators agree that Greece needs to act urgently to solve the problem of its porous borders.

"The fact that Athens is considering the construction of a massive wall along its border with Turkey is absurd, given that both are members of NATO. It gives us a foretaste of what would happen if Turkey is, one day, accepted into the European Union. Europe's doors would be thrown wide open. At the same time, no one should kid themselves that a fence would stop people wanting to cross the border."

"It is worth taking a closer look before we completely write off this idea. No one wants to fence off the entire 206 kilometers of the Greek-Turkish border. Instead a 12-kilometer-long fence is planned, where the border between the Greek settlement of Orestiada and Turkey's Edirne does not follow the path of the Evros River but rather can be crossed overland."

"This is a trouble spot: More than 100,000 illegal immigrants crossed the border here last year. Nine out of every 10 refugees fleeing poverty arrive in the EU via this route. The placement of 200 border guards here in November has stemmed the number of immigrants but not halted it. Now around 200 illegal immigrants arrive every night, but before the deployment of European Frontex guards, that figure was as high as 450."

"The planned fence could help 'close' this border but it still wouldn't solve the problem. The wave of illegal immigrants would not be halted but rather relocated, for example to regions where the river forms the border or across the Aegean Sea. This would have fatal consequences: Dozens of refugees die every year crossing at these routes when their overcrowded and decrepit boats sink."

"The Greek plan was clearly an act of despair… There are clear signs that the erection of a fence or a new wall at the Evros border river will not solve the core problem but rather shift it elsewhere. Illegal immigration does not take place along clearly defined routes; it is controlled by those criminal gangs for whom people smuggling is a profitable business."

"Illegal immigration is closely connected to organized crime -- that is the sad reality. Mafia groups in Turkey, Ukraine and Italy run their human trafficking as an industry. Propagating illusions is a key part of the industry, illusions about what awaits an African or Asian in the rich European countries of France, Germany or England, which are the end destinations of most immigrants. In addition, there is also the fact that people smugglers rarely operate without the complicity of corrupt border officials, who gladly turn a blind eye to some things for the right money. From this perspective, the European Commission is correct to react skeptically to Athens' construction plans and to demand that the Greeks first do something to deter and discourage the traffickers."

"In countries like Slovakia and Romania, which have recently joined the Schengen zone or want to do so soon, they are achieving their goal (of deterring smugglers) through a combination of modern electronic and technological measures and by thorough, systematic training of border officials. These two examples are proof that it is possible to achieve a higher level of border security than that of Greece."

"It's a pity that Greece is now not going to build a huge wall after all. A fence along its entire 206-kilometer land border with Turkey would have been better. Better for the Greeks, whose small, debt-riddled and badly organized country is completely overwhelmed by the influx of refugees. Better for the refugees too, perhaps, who face a distinctly inhumane welcome in Greece."

"However, clearly shaken by criticism from all sides, Athens has made an about-turn. Now it will build a relatively short fence instead, only 12 kilometers long and 3 meters high. It doesn't require much genius to predict that the people smugglers will soon find ways to get around this short fence."

"Most of the refugees do not want to stay in Greece. They want to find a way to get to the richer countries in northern and western Europe. But the law is clear: (...) asylum applications can only be made in the country of entry. And so Greece continues to cram more and more refugees into its overflowing camps..."

"The German public feels smug amid the asylum debate. Whoever manages to overcome the high hurdles and make it all the way here will be more or less properly treated. But we don't want to know the fate of those who fall far from our borders. Perhaps the Greek wall would have destroyed our complacency. It would not have been so easy to ignore a long, high, countryside-disfiguring border fence running across ancient Thrace. Fortress Europe? It has existed for a long time." 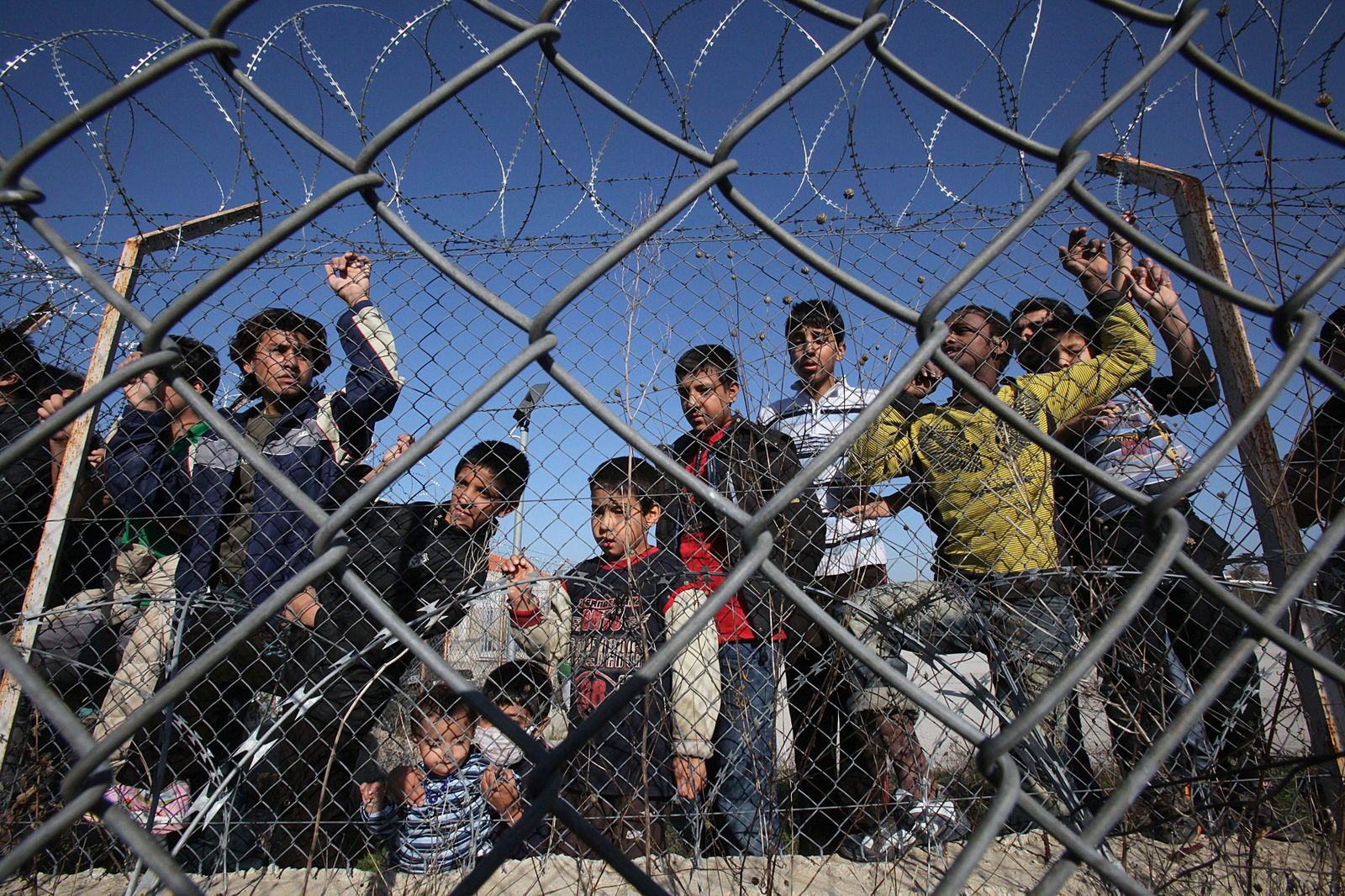 This November 2010 photo shows illegal immigrants in a reception camp in Kyprinos near the border to Turkey. Brussels has told Greece to work on its long-term strategy for its borders. "Fences and walls have proven in the past to be really short-term measures that don't really help address and manage the migratory challenges," a European Commission spokesperson said.