In the days following the Utøya massacre, Norwegians have insisted that the bloodbath, which left at least 76 people dead, will not change their famously open and democratic society.

"Evil can kill a person but never conquer a people," said Norwegian Prime Minister Jens Stoltenberg at a rally to remember the victims on Monday evening. In at times emotional speeches, the prime minister, who has been praised for his handling of the crisis, has called on Norwegians to unite around their democratic values.

But one of Norway's biggest challenges will be that of reconciling its liberal values with the desire to see Anders Behring Breivik, who has confessed to the attacks, adequately punished. Breivik is facing terrorism charges, which he denies. But even if convicted of terrorism, he would only face a maximum prison sentence of 21 years under Norwegian law.

Prosecutors are now considering charging Breivik with crimes against humanity, for which the maximum penalty is 30 years. Under Norwegian law, the basic criteria for the crime is "to kill a group of civilians systematically," according to an Oslo University law professor quoted by the Associated Press.

Breivik laid out his motives in a 1,500 page treatise published on the Internet, in which he explained how he wanted to save Europe from "Islamization" and Marxists. He apparently targeted the summer camp on Utøya because it was organized by the youth wing of the ruling Labor Party, which supports immigration.

Breivik's lawyer Geir Lippestad said Tuesday that the case indicated that his client is insane. "He believes that he's in a war and he believes that when you're in a war you can do things like that without pleading guilty," Lippestad said. If Breivik is declared to be insane, then he may be committed to a psychiatric institution rather than serving a prison sentence.

On Wednesday, German commentators ponder how Norwegian society should deal with the horrific crimes.

"The deeds of Anders Breivik Behring are so unimaginably cruel that they pose a question which will be difficult to answer: How can a society justly punish someone like that? The answer will be painful -- because it will hardly satisfy the pain of the victims, the grief of the relatives and the horror of the population."

"The judiciary has attempted to take all this into account as they publicly deliberate whether to indict Breivik for crimes against humanity. The prosecution is obviously driven by the desire to lock up the perpetrator for longer than is actually possible. (If convicted of crimes against humanity) Breivik could face 30 years in prison, compared to the maximum of 21 years that Norwegian law allows for terrorism offenses."

"As much as this attempt corresponds to many people's gut instinct, it is wrong. The legal systems of democratic societies have renounced revenge as a principle for punishment. Instead, they aim to prevent future crimes through deterrence and to protect the public, while also respecting the criminals and giving them a chance at rehabilitation. Breivik too, who has been dubbed a monster by the tabloids, also has a right to a fair trial and to a sentence which corresponds to what the law stipulates for his crimes. Anything else threatens to subvert the rule of law."

"Prime Minister Stoltenberg has said that Norway has passed this test, for which he received applause from his compatriots, showing that they agree with him. But what does this test consist of exactly? … If it turns out that a more rapid intervention on the island had been possible, or if it turns out that the authorities could have detected (Breivik's plans) through intelligence and police work, and if even a single child's life could have been saved as a result, then the political hope that more openness leads to more safety in everyday life will melt away. The other part of the test involves dealing effectively with the massacre within the judicial system and in the terms of the prison sentence or preventive detention. The victims have not yet been buried -- it is too early for political confidence."

"If more openness and more democracy is really the answer to terror, then Norway has to ask itself some uncomfortable questions. The first should be how it plans to deal with the right-wing populist Progress Party in the future. It is no accident that Breivik found his political home there over a period of many years. And when the party's leader now innocently announces that (the attacks) are 'a terrible nightmare,' then the party is clearly hoping that its own slogans about the 'creeping Islamization of Norway' have been forgotten. ... At the upcoming local elections in September, it will become clear whether at least some of the party's sympathizers have had second thoughts."

"But Stoltenberg's Labor Party also needs to have a re-think. All too often, the party has failed to seriously confront the right-wing populists in political debate. The Labor Party has left that largely to its youth wing, the AUF. It is no coincidence that that organization and its summer camp on Utøya became the target of Breivik's hate."

"The reputation of (the late German Chancellor) Willy Brandt is closely linked to his famous 1969 slogan: 'Let's dare to have more democracy.' The political ideas of Germany's first post-war Social Democratic chancellor were decisively shaped by his experiences during his exile in Norway during World War II. The reaction of Norwegian politicians, the media and the general public to the (Utøya) massacre shows that this liberal, freedom-loving way of thinking is still seen as a hallmark of Norway's political culture by a large majority of people. The debate is characterized not by calls for new laws and a stronger state, but by a commitment to an open society that must be able to cope with even such an egregious breach of morals and humanity as Friday's mass murder."

"The mass murderer of Oslo has already achieved some of his insane goals. The tremendous media attention that is being focused on him and his muddled ideological motives are giving him and his heinous crimes mythic status. Heavyweight newspapers are now interpreting his grisly, 1500-page 'manifesto,' with which he wanted to lend his barbaric deeds legitimacy by making them out to be an act of political revolution. They run the risk of allowing him to be taken seriously as a 'theorist' and a 'strategist.' The worst punishment for this killing machine in the form of a man -- whose name I do not even want to remember -- would be to not only lock him up for the rest of his life, but to deny him any further publicity." 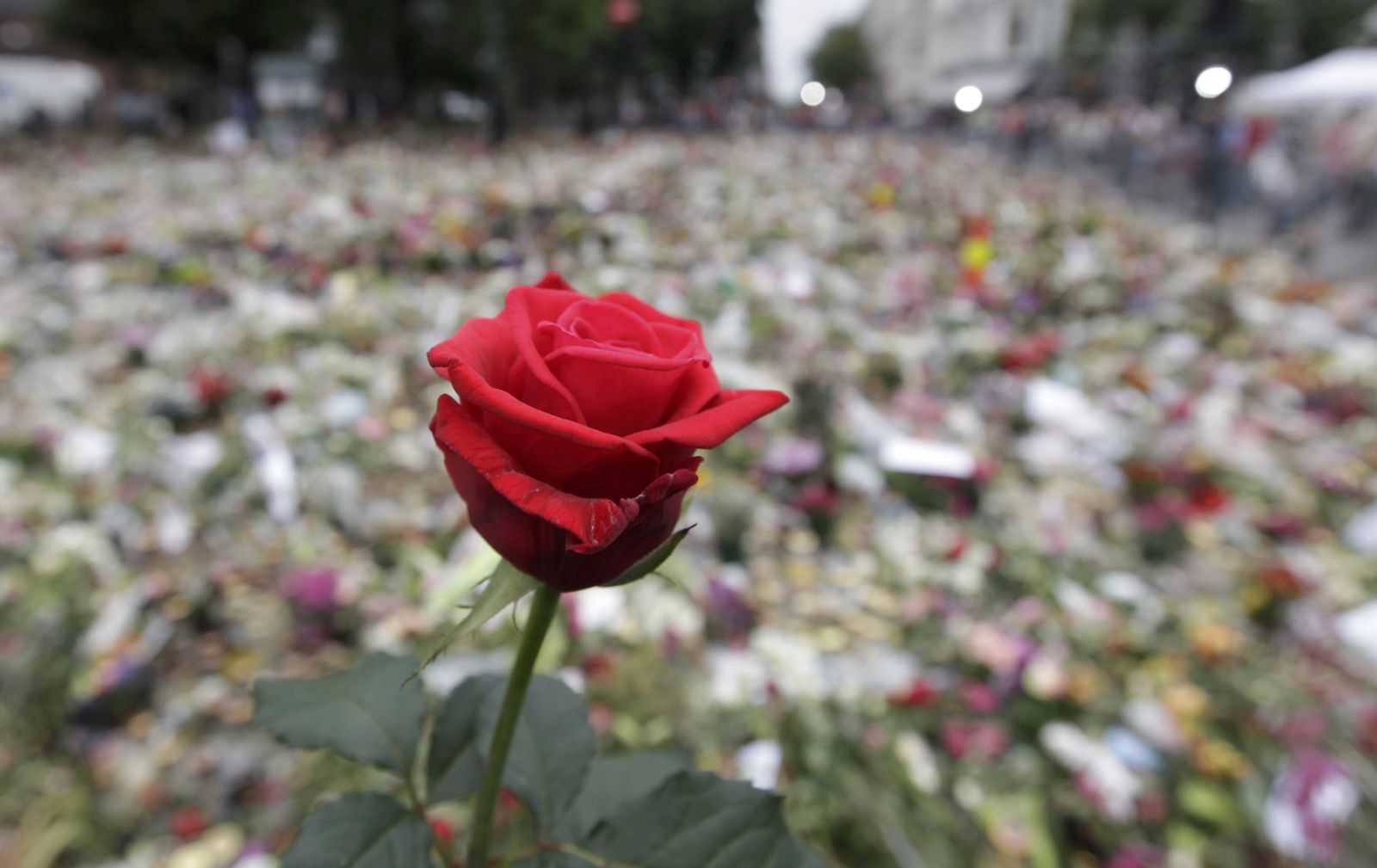 A rose is seen above a sea of flowers and candles at a temporary memorial for the victims of the Utøya massacre in Oslo.