It was a move long in coming. On Tuesday, the European Commission launched legal proceedings against Hungary for passing authoritarian laws which the European Union says threaten the independence of the central bank and judiciary and violate bloc treaties.

The Commission said the laws governing the central bank, the retirement age of judges and the data protection authority violated EU rules. It said the legislation, which came into force on Jan. 1, must be amended within one month if Hungary wants to avoid a procedure that could end up at the European Court of Justice, the EU's highest court.

The legal case could delay the payout of urgently needed foreign aid to Hungary, which faces the threat of insolvency. Talks with the International Monetary Fund on aid collapsed last year in a dispute with lenders over the new legislation. The IMF said Hungary must first get the EU's blessing before talks on a new financial package can start.

Hungarian Prime Minister Viktor Orbán told German daily Bild on Wednesday that his government was willing to compromise on the central bank law. "In this case we will bow to power, not to arguments," he said.

Orbán will hold a speech to the European Parliament on Wednesday to respond to the criticism of his constitutional reforms. "I would recommend that those people who claim we don't want democracy take a look at our constitution. Hungary is and remains democratic and a country of freedom fighters. We stand by our values and our nation, even when the wind is against us. And even if that wind reaches hurricane force."

He said he was also ready to compromise on the judicial reforms. "We are open and ready to discuss all problems the EU Commission brings to us on the basis of serious arguments," Orbán told Bild.

Media commentators in Germany, however, say that Orbán has abused his two-thirds parliamentary majority to cement his party's hold on power, thereby damaging democratic freedoms and institutions. They lay into Orbán on Wednesday, accusing him of leading his country to the verge of financial and democratic bankruptcy.

"It was high time for the European Commission to act. Orbán the power politician has gone about dismantling democracy in his country with cynicism and determination, using the instruments and institutions of democracy to do so -- even though he denies it. The opposition in the Budapest parliament is powerless, and the opposition on the streets isn't strong enough -- yet. All that remains is for the European institutions not just to admonish Orbán, but to use effective means to make him stick to the rules and to the legal norms."

"Hungary, once hailed as a shining example among the new members of the European Union, has become its biggest problem case. The country isn't just on the verge of financial ruin but, worse, on the verge of democratic bankruptcy. The EU must stop this development to shield the people of Hungary but also itself from harm. If the government in Budapest is allowed to get away with its actions, the European code of values won't be worth the paper it's written on. Europe as a haven of democracy, human rights and freedom would lose credibility around the world.

"Hungarian Prime Minister Viktor Orbán is to blame for things having gotten so out of hand. The government leader is clearly infected with a Bonaparte virus and is misusing his two-thirds majority in parliament to subordinate the state to himself and to his party. In the heart of Europe, a managed democracy with authoritarian traits is emerging. Brussels isn't blameless. It looked the other way for too long and responded too hesitantly to signs of an undemocratic development."

"For long enough, the European Commission looked on helplessly at how Hungarian Prime Minister Viktor Orbán curbed media freedoms in his country. After he curtailed the independence of the central bank and the judiciary with his constitutional reform, the EU's patience run out. The launch of infringement proceedings is a viable way to bring Orbán to his senses. If the European Court of Justice ends up ruling that the constitutional reforms he whipped through parliament are unlawful, he will have to revise his undemocratic set of laws. He will hardly be able to ignore that the EU has further levers with which to force him to back down. These include the huge loan yet to be approved by the EU and the International Monetary Fund." 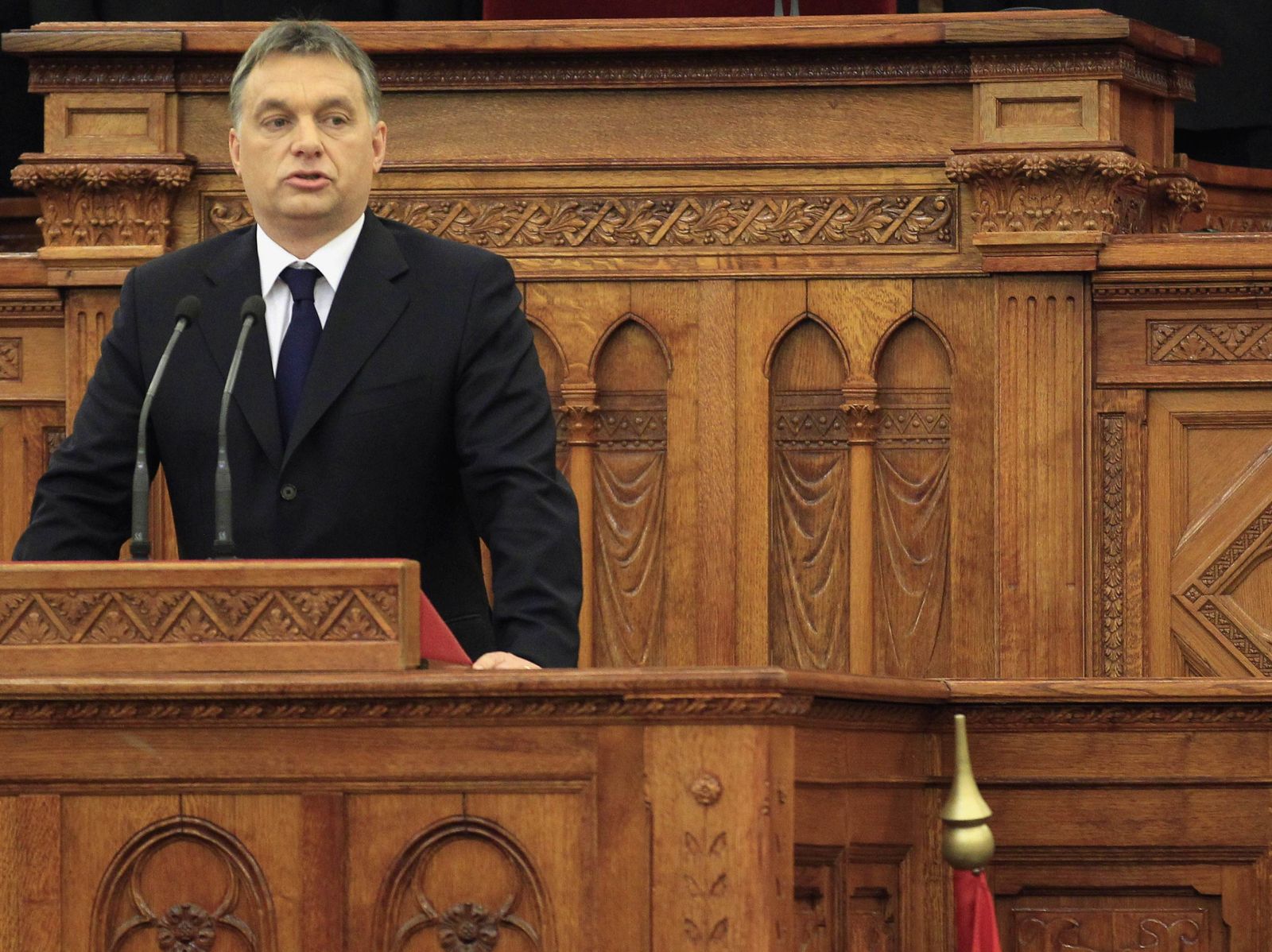 Under fire -- Hungarian Prime Minister Viktor Orban is due to address the European Parliament on Wednesday.