The ruling Fidesz party of Hungarian Prime Minister Viktor Orban used its two-thirds majority to whip a new constitution through parliament on Monday, and critics across Europe are in uproar. The move, they fear, will convert the party's conservative, nationalist ideology into a state doctrine, cement its power well beyond the end of its term and upset the democratic system of checks and balances.

German Deputy Foreign Minister Werner Hoyer said the constitution was even more worrying than the controversial curbs on the media that came into force in Hungary at the start of the year. "The media law testifies to a view of basic rights that is hard to reconcile with the values of the European Union," Hoyer said in a statement on Monday. "Our fears in relation to the media laws have been heightened rather than allayed by the constitution and by the way it came into being."

Critics say Fidesz should have consulted far more widely when rewriting Hungary's basic law. The Venice Commission, the EU's constitutional law advisory body, has questioned the transparency of the process.

The new constitution curbs the powers of the top court in budget and tax matters. Analysts say a major problem is that it would allow Fidesz appointees to control key public institutions -- such as the budget supervisory Fiscal Council -- well beyond its government term, which ends in 2014.

Over the weekend and on Monday, thousands of people protested in the capital, Budapest, against the new basic law. But Fidesz has said that with its big parliament majority, it has the authority to enact changes.

The law is also worrying neighboring governments because it claims Hungary is responsible for Hungarians living in countries bordering Hungary. A quarter of all ethnic Hungarians live in neighboring countries, mainly in Slovakia, Romania and Serbia.

Several German commentators are fiercely critical of the new constitution.

"It's strange, the more some countries profit from the European Union, the more prone they are to anti-European sentiments. The constitutional state has largely been abolished, future elections are efrfectively meaningless, the media are being whipped into line, as are theaters and museums and everything else that could shape the nation's culture."

"Barely a trace remains of pluralism, of variety, of the basic features of a free society. If you talk to people in Hungary about politics these days, you're confronted with fear, like in the days of East Germany. In this state, Hungary no longer belongs in the EU. It is a disgrace for Europe. But Europe is saying nothing."

"The good Hungarian as the right-wing ruling party of Viktor Orban sees him is a strangely anachronous being: Christian to a fault, awed by his nation's heroic past, more sympathetic to monarchism than republicanism. The good Hungarian sees his place between God -- the first word in the constitution -- and the mythical holy crown. He must be heterosexual and family-oriented in order to live up to the constitution."

"The Orban government wrote, debated and whipped this new Hungarian constitution with its florid, ideology-soaked preamble through parliament on its own. All it needs is the signature of the president who -- how else could it be -- was guided into office by Orban. He has succeeded where the Kaczynski brothers failed in Poland -- to elevate national-conservative ideology to a doctrine of state."

"But the constitution doesn't just postulate an intolerant ideology. The government has also rid itself of central elements of the separation of powers, by weakening the powers of the constitutional court, for example. Around Europe, many people were appalled by the Hungarian media law. The Orban constitution is a much greater scandal."

"The constitution enshrines a spirit of ideological, ethnic intolerance, both externally and domestically. Some are being reminded of the fascist rhetoric in Europe between the world wars. Neighboring countries are getting unpleasant memories of the cultural arrogance and power of the Hungary of old, whose Magyarization programs they were subjected to. The new constitution claims that the state of Hungary represents all other Magyars, meaning the three million living in neighboring countries."

Conservative Frankfurter Allgemeine Zeitung has no problem with the new constitution:

"The preamble may seem antiquated to Western observers. But for the big majority of Hungarians in the country and for the Hungarian minorities abroad, the references to a 'national statement of faith' and a holy crown' are values as worthy of the constitution as are references to God and Christendom and the emphasis on marriage and family as foundations of society and state. There is no evidence in the text that the amendments are not in line with basic European values, as Orban's opponents are claiming." 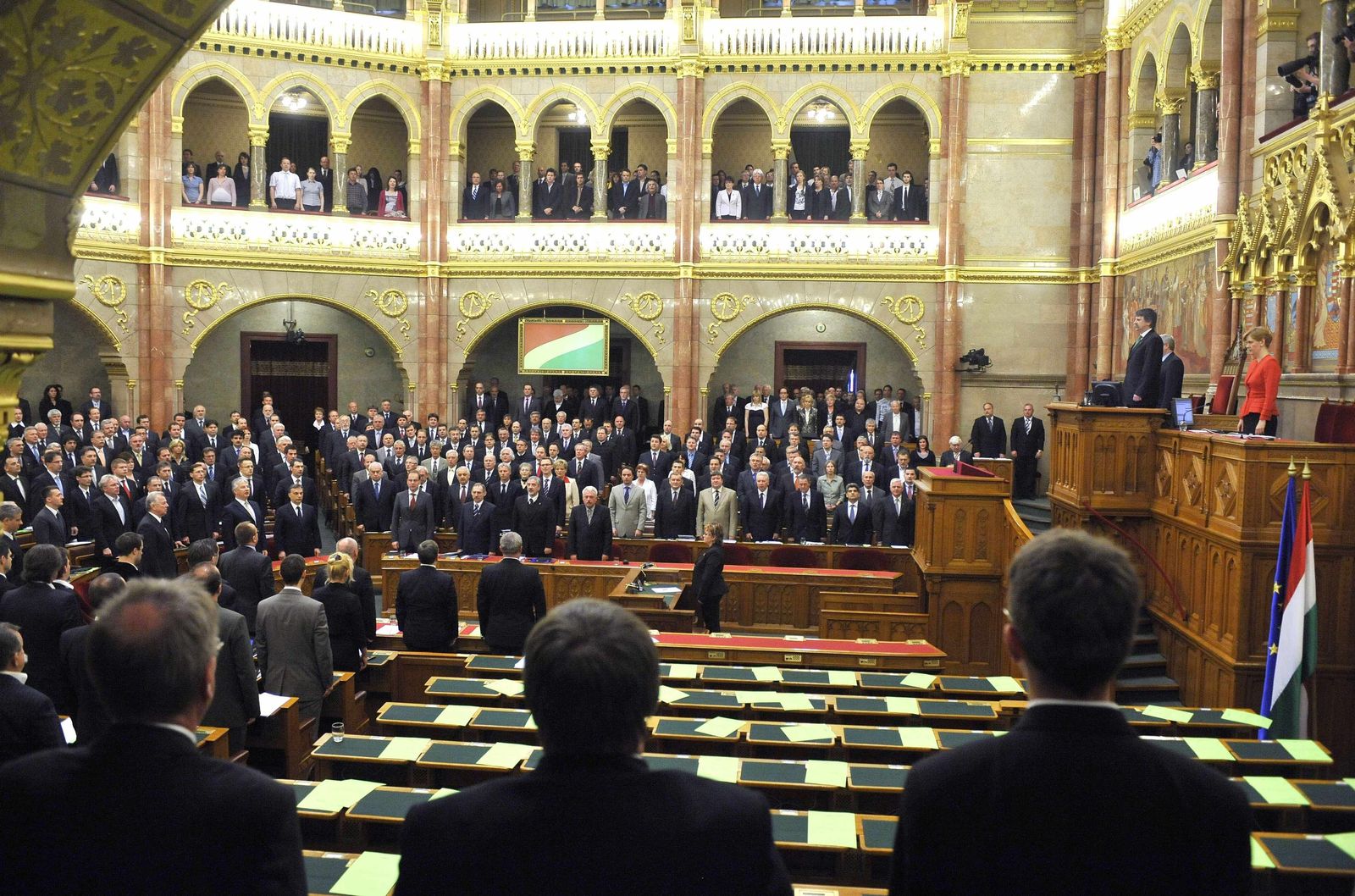 Hungarian lawmakers sing the national anthem after the ruling alliance of the Fidesz party and Christian Democrats approved Hungary's new constitution in parliament on Monday.