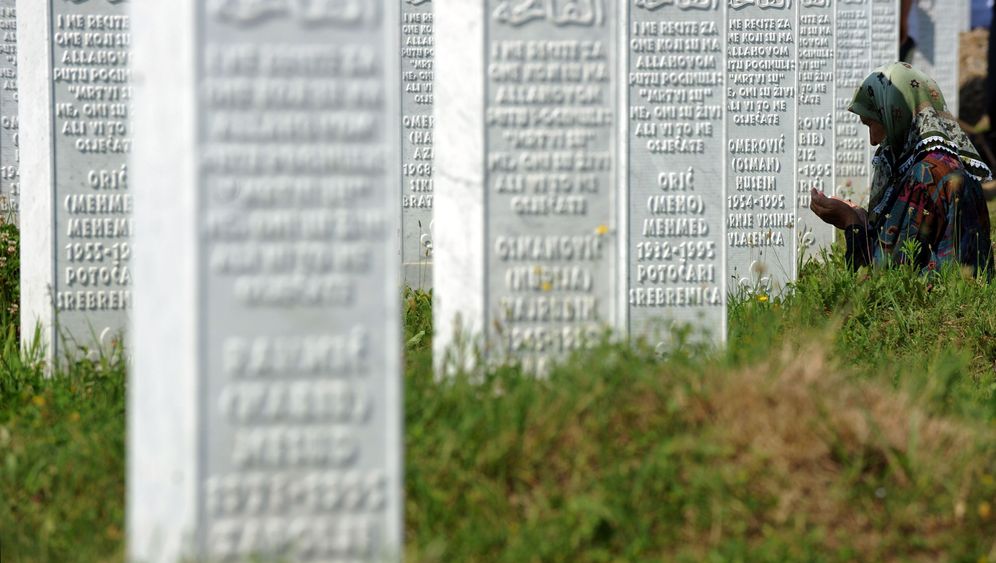 On Sunday 775 coffins belonging to victims of the 1995 Srebrenica massacre were buried at the memorial cemetery in Potocari, on the 15th anniversary of the atrocity. An estimated 8,000 Bosnian Muslim men and boys were killed during the worst mass murder in Europe since World War II, after Bosnian Serb militias and Serbian paramilitaries overran a United-Nations-designated "safe area" for refugees from the Bosnian War, which started in 1992.

Bosnian Serb militias separated the men from the women and transported them away. "They stripped all the male Muslim prisoners, military and civilian," according to the International Criminal Tribunal for the former Yugoslavia (ICTY), which ruled the massacre a genocide in 2004, "and deliberately and methodically killed them solely on the basis of their identity." A contingent of Dutch peacekeepers failed to prevent the massacre.

The men were first buried in mass graves, then bodies were later dispersed in smaller graves in a bid to cover up evidence of the massacre. Over the past few years, forensic experts have exhumed the remains of over 4,500 victims in order to identify them. The 775 people buried on the weekend were the latest to have their remains identified, which allowed family members to finally mourn at their gravesides.

The burial was attended by around 50,000 people. European leaders, including the Turkish prime minister, the French foreign minister and representatives of the European Union were present. A speech by US President Barack Obama was read out by Charles English, the US ambassador to Bosnia-Herzegovina. The message from Obama urged "governments to redouble their efforts" and arrest those responsible for the war crimes at Srebrenica. He described events at Srebrenica as a "stain on our collective consciousness" even after the world's promises of "never again" after the Nazi atrocities of World War II.

Serbian President Boris Tadic also attended the anniversary and although some saw his visit as controversial -- the Serbian government only apologized officially for the massacre in March of this year -- he pledged that Serbia would continue to do everything to apprehend those responsible for the massacre, who were, as yet, unpunished. Bosnian Serb general Ratko Mladic, who led forces into Srebrenica and gave the orders for the massacre, is still at large after 15 years.

The United Nations war crimes tribunal in The Hague has convicted more than a dozen people of crimes related to the Srebrenica massacre. Bosnian Serb wartime leader Radovan Karadzic, who is widely regarded as the architect of the ethnic cleansing campaign, is currently on trial for genocide and crimes against humanity there. He went into hiding in 1997 and was only captured in 2008. Former Serbian President Slobodan Milosevic died while awaiting a verdict in his trial.

German commentators mark the anniversary, saying it was important never to forget Srebrenica. But they are also quick to point out that there were still plenty of unanswered questions around the genocide, including the complex issue of who shared responsibility for the event as well as the disturbing fact that Mladic still remains at large 15 years later.

"In Germany one does not like to remember the genocide committed in Srebrenica 15 years ago. It is not for lack of information about the monstrous massacre. Rather, the war in Bosnia, that led to it, has been pushed to the borders of our collective consciousness. The crimes committed in Srebrenica have thrown up some basic questions about our civilization: How can it be possible that such a horror was permitted to happen before our very eyes, in this day and age?"

"We should remember this though. At the height of the war in Bosnia, well known peace researchers thought it best to simply let the conflict 'bleed out' naturally. Representatives of the left wing of the Green party even opposed the protection of humanitarian aid sent there to help the starving populace of central Bosnia. And some in the leftist scene in Berlin even took the side of war criminals Karadzic and Mladic."

"A culture that remembers the past is distinguished by the lessons it draws from history, for its present and for the future. That means admitting to one's own failings too. Many protagonists involved in this discussion however, prefer to throw a cloak of secrecy over the things that happened in Bosnia back then."

"On such a day, it is not only the Dutch officer working for the United Nations who raised a glass (with the Bosnian militia) that is burned into European memories -- but also the man that he wanted to toast: Ratko Mladic, the man who carried out this war alongside Milosevic and Karadzic."

"While the former two have been delivered to The Hague where they faced charges before the International Criminal Tribunal -- Karadzic after years of hiding and flight -- there is still no trace of Mladic. Is the 'Butcher of Srebrenica' still alive? Or is he dead, with just his followers keeping the tale of terror alive?"

"In a time when the whereabouts of every mobile phone can be traced using global positioning satellites, when satellites can take pictures of the tip of a match and when Google records every street lamp on its maps, this sort of disappearing act is incomprehensible. Serbia obviously still lacks the will to accept the past. How long will they need before they find Mladic?"

"Since it became clear what happened at Srebrenica that crime has become a symbol of a war that the West never really understood. The location represents the ethnic hatred unleashed at the beginning of the 1990s. But this sort of symbolism also oversimplifies the complexities behind the incident and obscures those who bear responsibility for it. On the anniversary of this crime one must remember that some initial errors of judgment by the United Nations, by NATO and by politicians opened up the door to this massacre."

"Additionally, we should remember that even today there are still unanswered questions. For example, whether there was a standing agreement between the western powers, the Bosnian Muslims and the Serbians to exchange Srebrenica for a suburb near Sarajevo."

"After the catastrophe it has often been alleged that the massacre was predictable. The only thing that is really certain is that the UN and NATO failed miserably."

"The 18th-Century philosopher Edmund Burke once said: 'All that is necessary for the triumph of evil... is for good men to do nothing.' In Srebrenica the good men did too little and 11 years later they were even awarded medals for that by the Dutch government. The UN has said that Srebrenica is one of the darkest chapters in its history -- yet the relatives of victims are still waiting for some sort of reparation. German lawyer Axel Hagedorn has been fighting for compensation for them for years. And as for Mladic? He is still free, 15 years later."