European finance ministers, meeting in Brussels on Monday and Tuesday, have rubberstamped a package of deep budget cuts and strict savings measures proposed by Greece in an effort to slash its budget deficit from its current level of 12.7 percent of gross domestic product to 8.7 percent by 2011.

Nevertheless, the agreement has done little to quell the ongoing debate in the European Union as to how best to deal with Greece and the dangers the country is posing to the common European currency, the euro. In a Tuesday interview with German radio, Luxembourg Prime Minister Jean-Claude Juncker, who heads the Eurogroup -- a body made up of finance ministers from countries in the euro zone -- said that the EU will impose further savings measures on Greece should the country fail to meet its budget deficit reduction targets.

Others, though, were more pointed in their comments about Greece's savings package. Swedish Finance Minister Anders Borg demanded stricter measures, saying that "if (Greece) wants to build credibility in the market, they must surpass expectations and they have not done that so far."

Borg also called for a greater surveillance role for the International Monetary Fund in Athens -- an idea rejected by Juncker. Juncker called the proposal "absurd" and said it was "fuelled by Anglo-Saxon voices."

Greece had been hoping that the meeting would provide details of the safety net agreed to by European Union leaders last week. So far, though, the EU has declined to outline exactly how it proposes to help should Greece prove unable to withstand speculators currently zeroing in on the country's weak finances. Greek finances have been placed under strict EU surveillance with a progress report due next month. Greece's public debt has ballooned in the last year and now stands at €300 billion, or 113 percent of GDP.

Just how aggressively the country will be able to pay down that debt, however, remains to be seen. A number of unions in Greece have called for strikes to protest the austerity measures announced by Athens, with the Greek customs workers' union staging a three-day walkout starting on Tuesday.

Many countries in the European Union, though, are likewise facing restless populations, unimpressed with the apparent need to bail out Greece. The news that Athens worked together with American investment banks to hide state debt from the European Union has further angered Europeans. Fully 71 percent of Germans are against sending EU funds to Greece, according to a survey by the research group Emnid. A survey conducted for the tabloid Bild am Sonntag found that just over half of Germans would like to see Greece thrown out of the euro zone altogether.

German commentators on Tuesday take a look at how the crisis currently facing the euro might best be solved.

"The debt crisis has developed a dangerous dynamic. Austerity measures have become the favored strategy for confronting threatening mountains of debt. It seems to have been forgotten, however, that savings is not a cure-all -- the economy must find its way back onto the path of growth. It wasn't all that long ago that politicians and economists were searching desperately for a strategy to scale back the state's role in the economy without disrupting fragile growth. This careful exit strategy, however, has now given way to mindless panic: Get out and save, is the new motto."

"Despite examples to the contrary, one cannot deny that a conflict exists between savings policies and growth strategies. The only way to get around that conflict is by coupling austerity measures with structural reforms aimed at improving economic efficiency. Competitive products must, however, find buyers. The Club Med of debt would be served better in the long term were Germany to buy their products instead of sending tax money."

"Historical revisionism related to the financial crisis is in high gear. Higher powers are blamed, Wall Street is ascribed supernatural influence and bankers have been credited with omnipotence. Indeed, high finance is now said to have lured Greece with a siren song of concealed debt, to Europe's vexation."

"But this mystification conceals reality. Those responsible for the Greek debt crisis can be found in Athens. The Greek government made promises to the country that it couldn't afford. That is why they worked with the investment bank Goldman Sachs to conceal the true dimensions of public debt from the European Union budget watchdogs. The adage currently circulating in Brussels is true: There are lies, damned lies and Greek statistics. Yes, Goldman helped in the deception and even profited from it. But the bankers weren't sirens. Competition mandated that they offer all of their financial products to those who were willing to pay for them -- including governments who were only interested in cheating."

"The European common currency zone was not created to guarantee peace in Europe, despite what former German Chancellor Helmut Kohl liked to tell his citizenry. Rather, it was designed to insulate industry and trade from the unpredictable ups and downs of international currency markets. How should German automakers find success in the Italian, Spanish and French markets when they were constantly confronted with the drastic devaluation of the lira, peseta and franc? Without a currency union, it would have been impossible. But a common currency among countries that follow radically different economic policies cannot go well. That was clear even to Kohl and his Finance Minister Theo Waigel."

"They devised the trick of placing euro zone countries in shackles. Governments were required to strictly limit their influence over the economy and a public debt ceiling was mandated.... In addition, economic policies were aligned.... But the real economies of euro zone countries have drifted apart. The actual purpose of the euro -- the creation of an economic and currency zone insulated from the vagaries of the financial markets -- was counteracted."

"In order to save the euro, (politicians) in Berlin and Brussels could do two things -- both of which contradict market principles. The simplest, though merely temporary in nature, would be to provide a nice large loan or loan guarantee to Greece (and other problem countries). Better, however, would be coordinated, expansive economic policies in the problem countries in order to spur investment. Following both paths would be the best of all strategies." 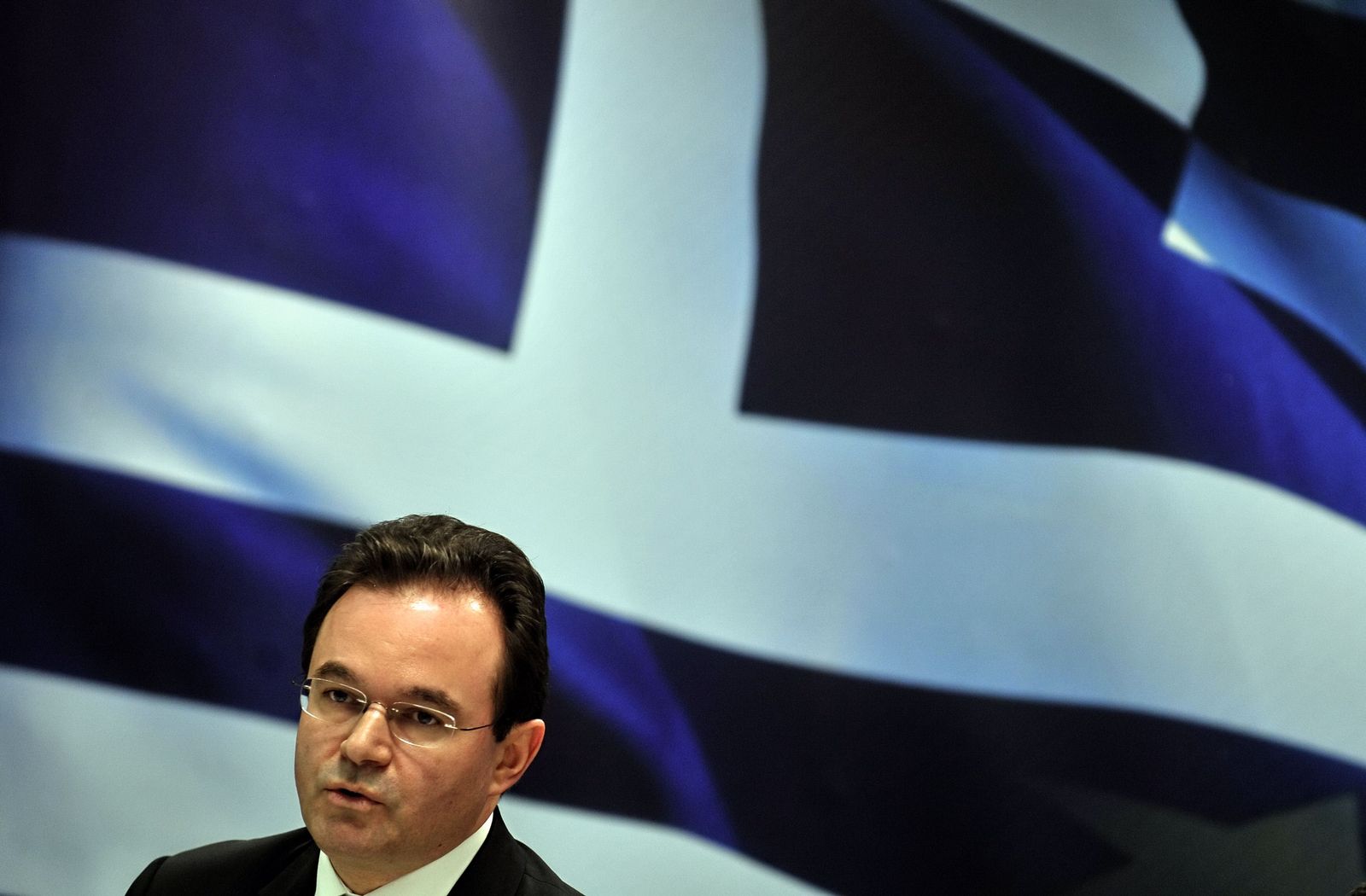 Greek Finance Minister George Papaconstantinou is facing intense pressure from his European Union colleagues to get his country's finances back on track.