Nicolas Sarkozy's Thursday announcement that he would invite his German counterpart, Angela Merkel, to Paris for an emergency euro meeting on Tuesday caught many in Berlin off guard. Merkel's press office quickly issued a statement insisting the meeting between the German chancellor and the French president had long been planned.

The tension generated by the announcement underscores how sensitive both leaders are to the latest market tumult created by Europe's sovereign debt crisis, along with uncertainty about the future of the euro and slowing economies. Is the euro zone on the verge of breaking apart, or will leaders like Merkel and Sarkozy be forced into a shotgun wedding -- one that will lead to so-called euro bonds and an economic government in order to save the common currency?

In Germany, Merkel is deeply concerned about her ability to secure a parliamentary majority for a second bailout package for Greece, in addition to passing significant ehancements to the euro rescue program that will drive the euro-zone countries closer to the status of a transfer union. And, in France Sarkozy, has been forced to combat rumors that the country could be on the verge of a ratings downgrade.

Both Merkel and Sarkozy have stressed the importance of parliamentary approval for the bailout package by September, but the chancellor is facing some resistance in Berlin. Her junior coalition partner, the Free Democratic Party (FDP), is averse to anything containing even a whiff of a transfer union, meaning she is likely to need broad support from the opposition. But there she is facing some tough questions, as well.

Leading representatives of the center-left Social Democratic Party (SPD) told the Süddeutsche Zeitung newspaper on Friday that they may not approve the measures if Merkel's finance minister, Wolfgang Schäuble, doesn't quickly provide concrete details about which laws he wishes to introduce or modify in the context of the bailout program. "So far, we haven't received any additional information from the government," the SPD's budget spokesperson in parliament, Carsten Schneider, told the paper. "If that doesn't change soon, then the proposed time frame will be very ambitious."

The party's deputy floor whip in parliament, Joachim Poss, sent a similar message to Schäuble, the paper reported. The letter contains demands for additional information about what potential burdens the EU decisions could have for federal, state and municipal budgets. That applies in particular to the scope of the guarantees Germany must provide when the European Financial Stability Facility (EFSF) lends money to other countries, the Süddeutsche Zeitung said. Much of the language in the EU leaders' agreement had been "very vague and non-concrete, which is why insecurity is still prevailing on the markets," Poss wrote.

Still, it is believed that most SPD party leaders stand behind approving the changes, at least in principle. Merkel will need the support of the Social Democrats in the Bundesrat, the second legislative chamber representing the interest of the states. But it also remains unclear whether she can deliver a majority in the federal parliament, the Bundestag, with her coalition of Christian Democratics and the FDP. A number of FDP members have said they would oppose the new bailout package, describing the decisions by the EU leaders as the start of a European "transfer union" that will burden German taxpayers.

European leaders had hoped to quiet the markets in July with the announcement of improvements to the euro rescue fund, but stock prices tumbled precipitously earlier this week after Standard and Poor's downgraded the US's top credit rating. The tumult slowed mid-week, but four European countries -- France, Spain, Italy and Belgium -- still moved ahead on Friday to temporarily impose short-selling bans in an effort to stabilize the markets.

On Friday, commentators in the German media look to the challenges faced by both Merkel and Sarkozy, whose political futures appear to be pegged to the rise or fall of the euro.

"Sarkozy is facing the most important week of his career. He was elected in semi-normal times and must now prove himself at a time when things are close to the edge of the abyss. Like Merkel, he is one of the few politicians upon whom the fate of the euro, the EU and the Europeans hinges. Germany is used to the president of its neighboring country being in a state of crisis. But if Paris fails, there is no way Berlin can sustain the EU on its own."

"The president and chancellor are damned to get along. They should both be more open to each other than they would perhaps like to be -- preferably by the time of their emergency meeting next week. Sarkozy must sacrifice the traditional French model of the open-handed state and emulate German virtues like frugality and budget discipline. He also needs to help to ensure that these virtues prevail in the rest of the euro-zone member countries."

"But if Europe needs to become more German, then Germany must also become more European. France desires an economic government and a greater amount of solidarity between richer and poorer euro-zone countries through, for example, the issuing of euro bonds (which would lower overall interest rates but make borrowing a little more expensive for wealthier countries like Germany). Both may be necessary in order to stop the speculation and to preserve both the euro and a semi-united Europe. To be sure, the phrase 'transfer union' is thoroughly disliked by Germans. But the word 'rigueur' (representing difficult social cuts and austerity measures) is also hated by the French. STill, both characterize unpopular but necessary policies that signal Europe is strong and will not fall apart. They should be Merkel's and Sarkozy's policies."

"France has found its national duty: the defense of its top credit rating. France is one of the few countries in the world to enjoy a AAA credit rating and, today, it is for the country what its 'force de frappe' nuclear deterrent once was -- a symbol of strength in Paris. What is at a stake is greater than a mere symbol, though, because -- as the most important guarantor of the euro rescue fund other than Germany -- France plays a decisive role in securing the euro zone."

"The rumors about a possible ratings downgrade hit the country by surprise and ended the government's summer recess early. The collapse of shares in banks, especially those of Societe General, has further increased the nervousness. What had previously only been discussed as a theoretical worst-case scenario has arrived: France has been sucked into the euro crisis. Even generally reflective financial experts in Paris see dark forces at work and are speaking of a targeted attack on their country."

"That's why it is worth taking a closer look. At the moment, a cocktail of allegedly vulnerable banks, a national deficit and a weakening economy is being stirred up. But the fact of the matter is that French banks fared no worse during stress tests in July than German banks did. And the European Banking Authority states that French financial institutions have less exposure in Greece than the Germans ones do -- both in terms of government bonds and private debtors. The authority says there is no special French exposure that would make it more vulnerable."

"The credibility test for the country will be bringing its budget deficit down to the EU's 3 percent threshold by 2013. French politicians have admitted their budget consolidation plans don't go far enough, and Sarkozy has sought to play it politically safe for too long. But we're talking about a relatively small, single-digit billion which should be easy. Meanwhile, France has already been hit by a slowing economy. That will make it more difficult to meet its fiscal policy goals since it will have to cut spending amidst a weaker economy. It will be uncomfortable, but the amounts are manageable. There is no reason to doubt France's creditworthiness."

"If the finance markets brought little to be happy about in recent days, they did force at least one realization: The euro zone cannot continue to deal with the crisis as it has been doing. Within one and a half years, a single problem in Greece has developed into a disaster for the entire euro-zone structure. The currency and its institutions are not equipped for the future. Either the euro zone -- at least at the finance and economic policy level -- will change into a kind of federal state with integrated policies in which, in exchange for financial aid, it is no longer possible for countries to live beyond their means. Or this young creation will break apart. That would be economically disastrous, and the Continent would also lose global influence in the long run."

"For Merkel, the question is in which direction she wants to go. If she pushes to save the euro, she will have massive problems in her coalition government. It is difficult to imagine the (business-friendly) Free Democratic Party going along with a transfer union. This means the chancellor might soon have to look for allies -- and it's possible the next election may even hinge on this issue. For Merkel, it is both a curse and a blessing. Like her one-time mentor Helmut Kohl, it would provide her the chance to go down in history as a great European. At the same time, she runs the risk of what happened to her predecessor, Gerhard Schröder. With his Agenda 2010 structural reforms, he did the right thing economically -- but was then voted out of office. In a country where the euro isn't hugely popular, Merkel could risk her CDU party's majority."

"Much would be gained in Germany's EU policies if the chancellor had as much trust in her own party as she apparently enjoys in France. In a poll of French people, Merkel fared far better than Sarkozy. But that could just mean that they merely have less trust in Sarkozy than they do in Merkel. In her conservative CDU party, not much would change if the chancellor held a special party summit on the euro bailout program. … More valuable than the trust of her party would be the broad majority for the euro rescue program in parliament -- and preferrably the two-thirds majority some believe would be necessary because of the package's incursions into the parliament's right to determine budgets. That would demonstrate confidence." 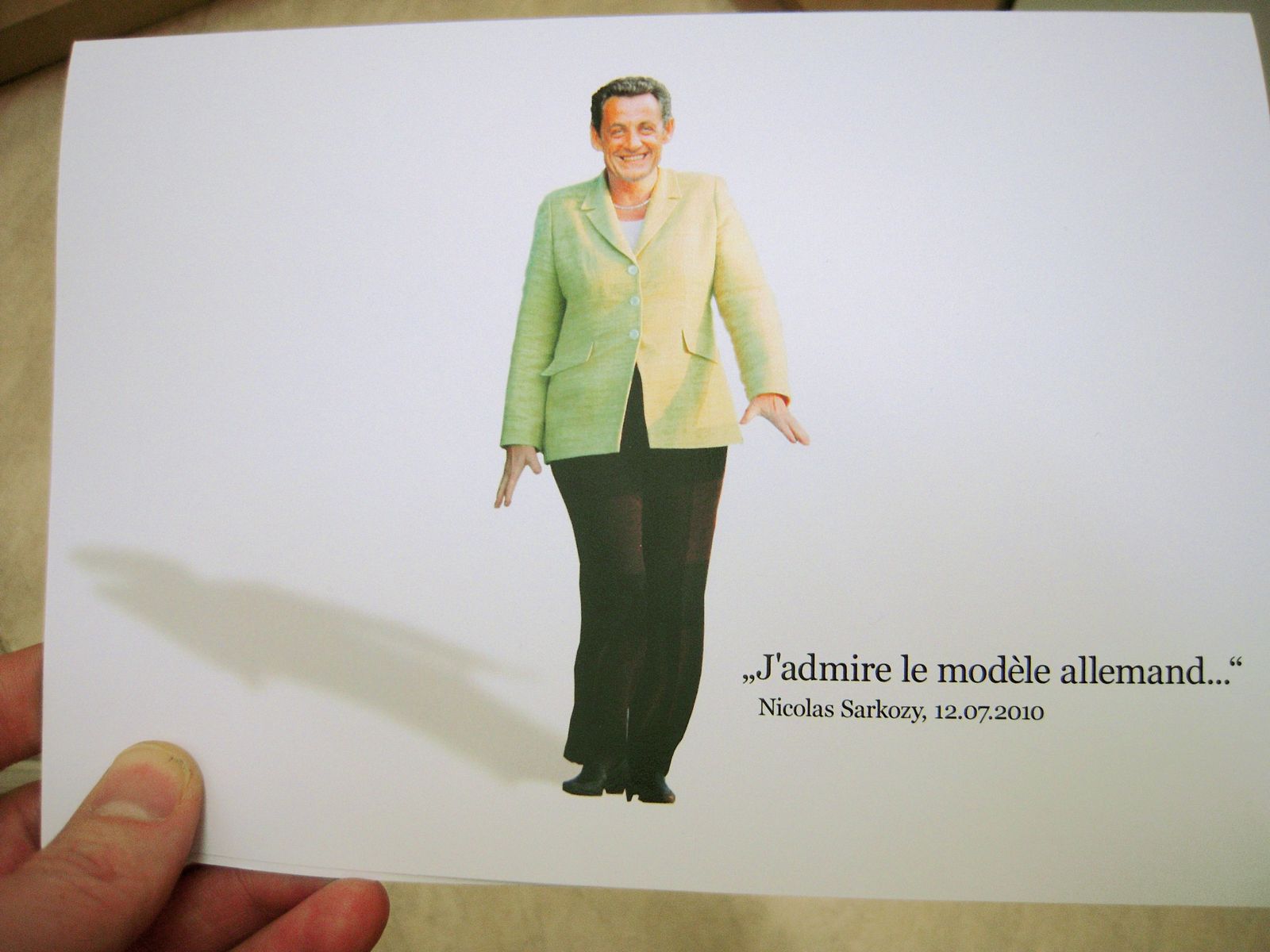 The Christmas card from the Paris bureau of German public broadcaster ARD: Merkel will have to become more French and Sarkozy more German to save the euro.