France and Germany have long formed the famous "motor" of the European Union, but seldom has it been so important for their leaders to show unity as now, at the height of the euro crisis. The negative impact of a number of high-profile differences of opinion on how best to fight the crisis has made it clear to German Chancellor Angela Merkel and French President Nicolas Sarkozy that they need to appear to be on the same page in order to avoid unsettling financial markets even more.

And now that Italy has a new, more reliable leader, the euro zone's leadership duo looks set to become a trio. At a summit in the French city of Strasbourg on Thursday, Merkel and Sarkozy made a deliberate show of unity with new Italian Prime Minister Mario Monti. The three leaders held hands at a photo op, as if to show how united they are.

Merkel and Sarkozy clearly want to get Monti, as leader of the third-largest euro-zone economy, on board. The two leaders' exasperation with his predecessor, Silvio Berlusconi, was all too apparent in recent months. Hopes are high that Monti and his technocrat government will be able to steer Italy out of the euro crisis.

But, on Thursday, it was clear who was calling the shots. Monti presented his economic program to Merkel and Sarkozy, creating the impression that he needed to get the Franco-German duo to approve his plans.

Similarly, it was Merkel and Sarkozy who announced after the meeting that they want to propose modifications to the EU treaties. The changes, Sarkozy said, would "improve euro-zone confidence" and lead to "more integration and convergence." The leaders did not specify what those changes would be, but Sarkozy said that Germany and France would present its proposal in the coming days.

Observers are speculating that European leaders could agree on reforming the treaties at the next European Council summit in December. A so-called European convention could then be called at the beginning of next year and start work on drafting a new treaty. The summit was originally scheduled for Friday Dec. 9, but it will now be extended to two days, starting on Dec. 8, diplomats revealed earlier this week, prompting speculation that big decisions are afoot.

Merkel said that the euro-zone countries needed to go further along the road to a fiscal union in order to avoid future crises. National governments had to more closely coordinate their policies in order to have "a common stable currency," she said.

But long-standing differences of opinion in the Franco-German friendship were also apparent on Thursday. Merkel stressed that the role of the European Central Bank would not change under the proposed reforms. In doing so, she was pushing back against calls from other EU states -- France chief among them -- for the ECB to use its money-printing firepower to help solve the euro crisis. German opposes a greater role for the ECB out of fear that it would lessen the pressure on countries to sort out their finances and lead to inflation.

Merkel also repeated Germany's opposition to euro bonds, quelling speculation that Berlin might be ready for a U-turn. Following the Strasbourg summit, she told reporters that euro bonds "would weaken us all."

Sarkozy announced that the three leaders had agreed to hold another meeting in Rome soon in order to continue their discussions. The message the leaders wanted to send was clear: The three largest economies in the euro zone will push forward with their efforts to reform the EU. "We want the euro, we want a strong, stable euro ... we will do everything to defend it," Merkel said.

But the markets, it seems, were not convinced by the show of unity. On Friday, interest rates on Italian bonds rose to their highest levels since the introduction of the euro. Yields on six-month bonds were at 6.5 percent -- almost double what they were just a month ago -- and at 7.8 percent for two-year bonds. Analysts consider yields over 7 percent to be unsustainable. There was relief on Friday that Italy had managed to place the full €10 billion ($13.3 billion) worth of bonds it wanted to sell -- unlike Germany earlier this week -- but analysts described the pricing as "awful."

On Friday, German editorialists take a look at the significance of the three-way meeting.

"Angela Merkel is following the proper instinct by insisting on a clear order of events: Europe's treaties must first be changed before dipping deeper into the coffers to rescue the heavily indebted countries … This is not about German dominance, of which Berlin has been accused. Instead, it's about European rationality. Those who want to hold the EU together must engage in reforms."

"Many critics imply that Merkel has hegemonic intentions. Caught up in their zeal, they overlook the fact that Merkel's idea won't make Europe more German but, rather, more European. The new rules would apply not just to Athens, but also to Berlin."

"However, she is engaged in a race against time. Reforms can't be implemented overnight, and the financial markets are impatient. Here lies the greatest risk for Merkel. She's playing a bold game, and it appears that she may yet win. After much indecision, Nicolas Sarkozy came around to her position in Strasbourg. She has also found an ally in new Italian Prime Minister Mario Monti."

"Paris and Berlin will present their suggestions in 14 days' time at the EU summit. Accepting them would be the best thing Europe could do for itself. It's the only way the EU can regain trust and become effective once again."

"Hopes are high that Monti, whose seriousness is not disputed, will be able to sort out Italy's finances. In this respect, the meeting of Merkel, Sarkozy and Monti in Strasbourg has a symbolic element. It is high time for Italy, the third-largest economy in the euro zone, to play a sensible role again."

"But the summit can also be interpreted in another way. According to that interpretation, Monti -- who indirectly owes his new position in part to Merkel and Sarkozy -- needed to meet with the two leaders shortly after taking office and explain his fiscal and economic plans to them. The goodwill that the chancellor expressed was sincere, but it also had something patronizing about it. It's hard to avoid the impression that Berlin and Paris were signing off on Monti's reform agenda. It's certainly true that, during the crisis, Germany and France do not want to let the reins out of their hands. After all, they are making the largest financial contributions (to combating it)."

"Traditionalist supporters of European unification will not be happy about this development. Indeed, the euro crisis, coupled with the Lisbon Treaty, has led to a strengthening of the large member states. Merkel and Sarkozy are now at the center of all attempts to get the crisis under control. Without them, nothing is possible."

"It was not always the case that there was so much unity between France and Germany. The crisis has made it possible. Sarkozy knows that, should discord emerge in the relationship with France's giant neighbor -- seen as the euro zone's last bastion of stability -- then all would be lost. France would lose its top triple-A credit rating, and Sarkozy would lose his chance of posing as a successful crisis manager and winning a second term as president in next year's election. … Merkel, for her part, knows that if the euro and the European project are to be saved, it can only be with France's help."

"In the postwar period, Germany has neven been so influential and strong. That doesn't necessarily trigger universal admiration in neighboring France. The nation's own loss of importance has aroused fears that German is striving for dominance. Something similar is happening in the rest of Europe, where the reservations are not only directed against Merkel but, in view of the Franco-German double act, also against Sarkozy. The two leaders are viewed with suspicion. When they demonstratively received Monti as the third member of the alliance in Strasbourg, it was partly to rebut criticism of the Franco-German leadership."

"Merkel and Sarkozy know that they need each other. And they're acting accordingly -- and more consistently than ever. That's all that can be expected at the moment. But, in a time of crisis, that's already a lot."

"It seems to have escaped Chancellor Merkel's notice that, for some time, all governments -- with the exception of Germany -- have already been economizing heavily. Unfortunately, it is doing no good because they are all economizing to the point of recession. Portugal is the best example. For two years, the government there has been slashing its budget. The sole result? The economy has collapsed, and the deficit remains. The ratings agencies aren't making a mistake when they downgrade Portuguese government securities to junk bond status."

"So, if austerity courses alone aren't working, then why is Merkel insisting on them like an iron lady? The banal explanation seems to be this: because Germans don't have to cut spending yet. Like some kind of miracle, the euro crisis seems to have passed them by. Tax revenues are good, unemployment is low and the consumer climate isn't bad. For many, it is hard to imagine that the euro crisis will soon seize Germany, too. But this laid-back attitude can't last for much longer because the German economy is already stagnating, and it is obvious that Europe is facing a long downturn."

"The euro crisis has developed a level of momentum that is pulling in more and more countries and economic areas. To point out only a few crisis areas: The inter-bank lending market has completely collapsed. Credit institutes are almost exclusively refinancing themselves through the European Central Bank. Massive holes in capital resources are opening up at all banks in such way that they are hardly able to secure any additional credit. This is being felt particularly hard in Eastern Europe, which has already been cut off from international financial markets."

"One can only hope that Merkel doesn't seriously believe that it would be enough to merely introduce greater austerity measures. Hopefully, her current position is just a tactic and she wants to wait until the crisis is big enough that voters will understand that the emergency measures by the ECB and euro bonds are imperative." 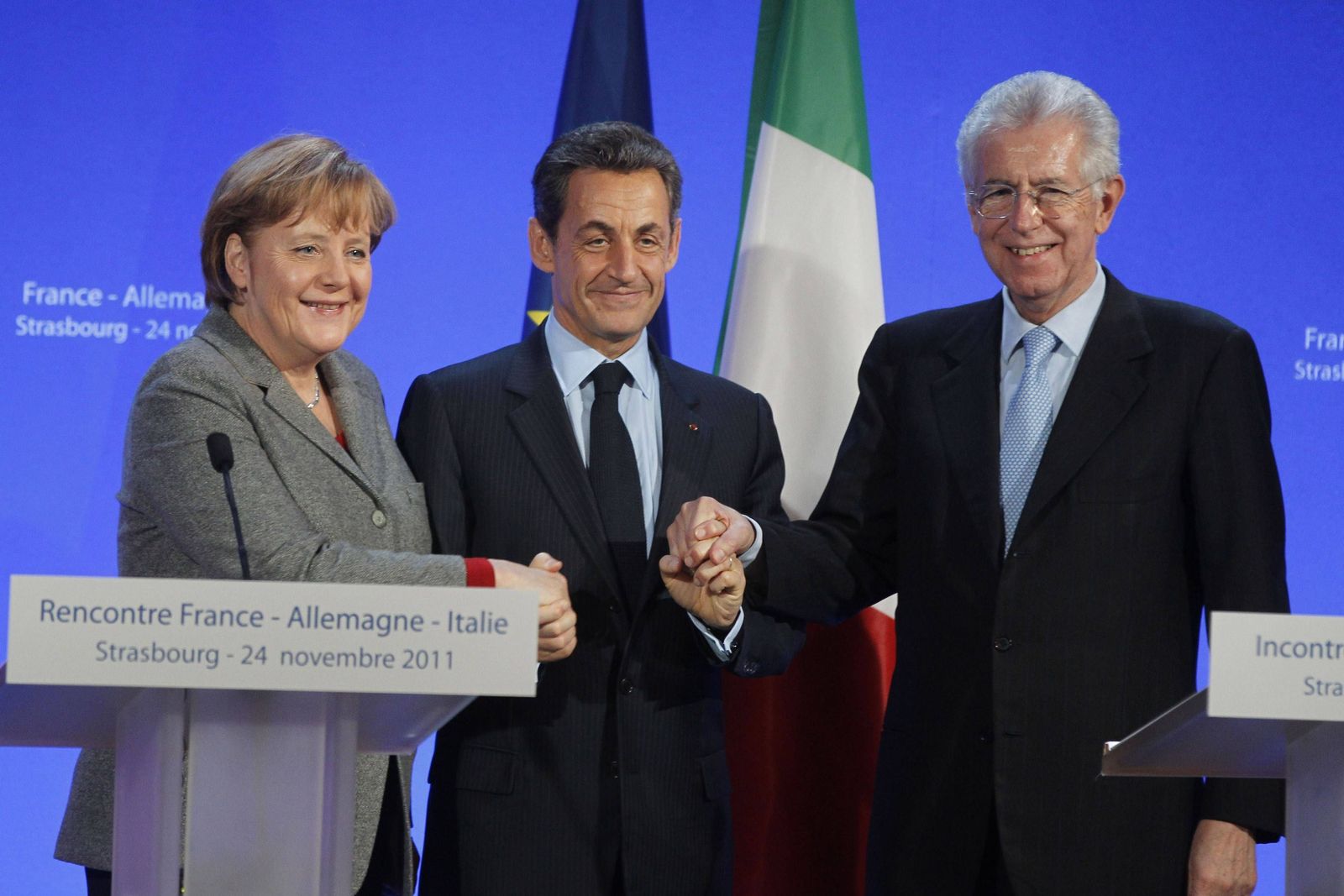