The push and shove over what to do with immigrants from North Africa who have landed on the shores of Italy and Malta in recent months continued to play itself out Tuesday in the power corridors of Berlin.

Italy, which has received the lion's share of immigrants, primarily from Tunisia, angered several other European nations when officials recently stated they would offer visas to immigrants who have landed on Italian shores since January and encouraged them to travel north to other European Union countries. More than 20,000 immigrants from North Africa have landed on the Italian island of Lampedusa since unrest started in the region in January.

Italian authorities moved Tuesday to send the remaining Tunisian immigrants in Lampedusa on to camps in other parts of the country, after some there set fire to part of the camp Monday and rioted following the deportation of other Tunisian immigrants back home.

Italy reached a bilateral agreement with Tunisia last week, in which they agreed to send all immigrants from Tunisia who arrived after April 5 back to the North African country.

'Italy Has Been Left Alone'

Italy has argued in recent weeks that other European nations must share the burden of the immigrants arriving on its southern shores. Reuters reported that Italian Interior Minister Roberto Maroni, in Luxembourg at a meeting of his EU counterparts on Monday, said: "Italy has been left alone. I wonder whether in this situation it makes sense to remain in the European Union."

In Germany, the issue touched off a mini-political firestorm, with the Interior Minister Hans-Peter Friedrich warning against sending a signal to North Africa that the borders in Europe were open. Meanwhile, the interior minister of the state of Lower Saxony called for European sanctions against the Italian government if it did not give in on the immigration issue.

Friedrich, a member of the conservative Christian Social Union (CSU), the sister party to Chancellor Angela Merkel's Christian Democratic Union (CDU), told a German television program Monday that it was Italy's problem to handle. "Italy is a large country," he said. "Twenty-three-thousand refugees in relation to the country's entire population is no problem."

His position drew swift reaction from the opposition, and also from his coalition partners, the business-friendly Free Democratic Party (FDP). Cornelia Pieper, a state secretary in the German Foreign Ministry and prominent member of the FDP, said the problem should not be left to Italy. "It is a European political problem and a question of human rights," she said in an interview with Reuters.

Meanwhile, Sigmar Gabriel, the chair of the Social Democratic Party (SPD), said he was for "opening the door of Europe" so Italy could better handle the refugee situation, and Volker Beck of the Green Party told public radio station Deutschlandfunk that Germany should send a signal to North Africa and "take people temporarily."

Several critics of Italy's move argue that the immigrants on Lampedusa are not political refugees, but are more akin to migrant workers. On German television on Monday night, Friedrich said Germany would take in those "really in need of protection."

Around 800 refugees also remain stranded in Malta, also a member of the EU. Last week, German authorities agreed to take 100 migrants from the island nation, arguing that because of its size and location, the country has been especially hard hit by the wave of North African emigration.

On Tuesday, German editorialists weigh in on the issue.

"Italy is obligated to help the refugees because of its location and the humanitarian duties ascribed all civilized nations. Until now, their numbers have been kept within limits, and they are far removed from the amount of refugees from the Balkans who once had a (temporary) stay in Germany."

"In light of Rome's provocation to simply send the stranded on, it is understandable that Berlin announced it would patrol what is actually a borderless Schengen region, and would not recognize Italian documents, to prevent attracting even more refugees. It is admittedly clumsy to simply remind Italy of its size, and then help Malta. Everything needs to be taken into consideration, as long as the EU has not put out new rules for distributing the burden."

"The EU Commissioner for Refugees correctly says: 'One can have solidarity without rules.' Not only can one have that, one must. Solidarity is the ground rule."

"North Africa is burning. Thousands of refugees are searching for safety by starting out on the Mediterranean. And Europe? After the debate over Libya, it has happened again. When push comes to shove, everyone in the European Union is out for themselves. National or even regional elections carry more weight than common goals."

"There is tremendous outcry: Schengen is in danger! France is once again patrolling its border with Italy, and Germany's interior minister and leaders in its southern states are threatening to raise their border barriers again, even though only a few North Africans want to come to Germany."

"Consider the facts: We are talking about 26,000 people who have reached the tiny island of Lampedusa since the beginning of the year. Twenty-six-thousand people in Italy, a country with a population of 60 million, and Europe, which has 350 million. We Europeans celebrated the courageous revolutions from Tunisia to Egypt. But faced with one refugee for every 13,460 citizens, we start to panic."

"When the Iron Curtain fell two decades ago, the EU countries did not seal themselves off from the flood of people from the eastern countries. Then, too, many refugees were 'only' looking for a better life in the West, without the threat of political persecution. Many later returned to their own countries. The people who are fleeing from North Africa because of war and necessity are not worth any less. Even Germany, which is not participating in the military intervention, should take that to heart."

"Regarding the Italian complaints, Rome should be wary of not gambling away the solidarity that it may one day need. Re-labeling illegal migrant workers from Tunisia as tourists and opening the door for them to the rest of the EU will not increase the willingness of its members to make concessions in the current debate over asylum laws and over a re-distribution of the burden of immigrants. Likewise, the much-needed debate over changes to immigration policy will be hampered."

"At a summit in March, the EU agreed to offer the North African countries a so-called Mobility Partnership, in which job-seekers, students and business people were to be offered quicker entry into the EU countries. Concrete recommendations were to be made by this summer. That helps the countries with their political fresh starts. And it somewhat deters, but does not fully stop, illegal immigration. A securing of the borders along the Mediterranean is also necessary for a Mobility Partnership."

"But can one lead a modern industrialized nation with such statements, especially one dependent on immigration? Can one thereby meet the requirements of a democratic Europe, committed to upholding human rights? No, and no again ..."

"Sealing itself off and raising a wall is no way for Europe to support the democratic breakthroughs made in North Africa. It is first a question of solidarity, and of not leaving Italy alone with the question of what to do with the refugee problem. Secondly, it is more important to follow the grand words of solidarity with actions: a Marshall Plan for North Africa must offer the people there so many prospects that fleeing for Europe is no longer worth it." 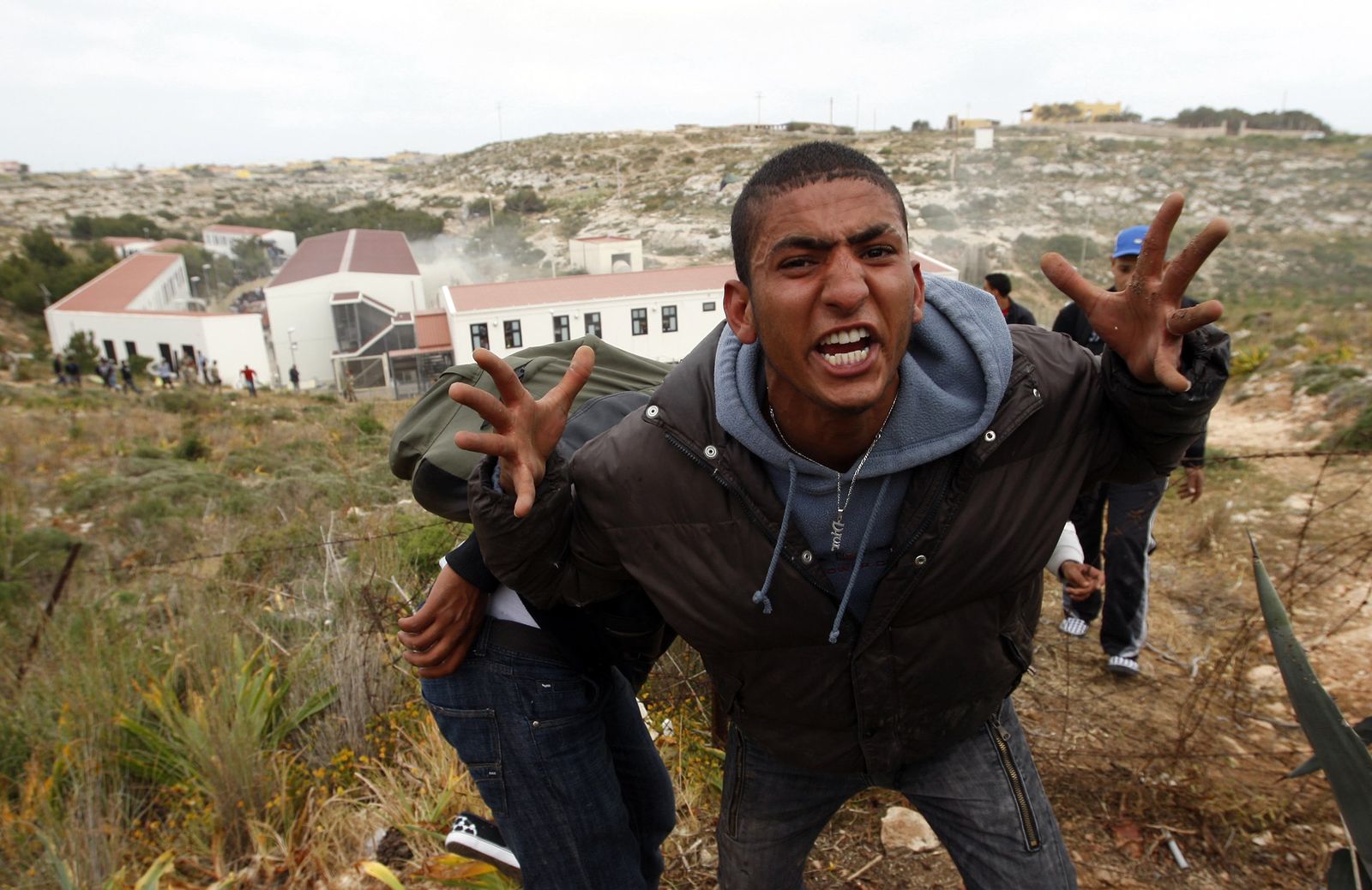 A man who fled the unrest in Tunisia leaves the immigration center on the Italian island of Lampedusa to protest against being sent back to his country.