The SPD said it would back her in the parliamentary vote on the second bailout package for Greece this autumn and would even support her in explaining potentially unpopular measures to the German public.

Steinbrück, regarded as a potential SPD candidate to challenge Merkel in the next general election in 2013, said the EU's strategy of merely helping ailing euro members service their debts had failed. "It is important that the summit takes decisions that are comprehensive and strong," he told a joint news conference with Gabriel and Steinmeier on Monday. "The danger of contagion for other countries is greater than ever." Greece needs a debt restructuring with a debt cut of 40 to 50 percent, he said.

Back on Their Feet

The German government is considering a variety of ways to lower reduce Greece's debt burden, including partial debt forgiveness and a renewal of bonds through the issue of fresh, longer-term paper.

Steinbrück also said the peripheral states needed an EU program to help revive their economies, akin to the US Marshall Plan that helped European countries get back on their feet after World War II.

Steinbrück's words carry weight because he gained respect for his handling of the 2008 financial crisis. He was finance minister at the time in a grand coalition between Merkel's conservatives and the SPD.

But the SPD's offer of help is self-serving, write German media commentators. It is meant to highlight Merkel's own supposed lack of leadership in the euro crisis, and to make the SPD look statesmanlike and unified. Merkel, by contrast, faces resistance in her own ranks to a major debt restructuring for Greece, especially from her Bavarian allies in the Christian Social Union party and from the pro-business Free Democratic Party (FDP), her junior coalition partner.

An Opportunity to Forge Ahead

The SPD's opinion poll ratings, currently at around 27 percent, aren't especially impressive, but the party would probably be able to form a government with the resurgent Greens -- at 21 percent -- if an election were held now.

Merkel's coalition of conservatives, at 32 percent, and FDP is in the doldrums, largely because of a slump in support for the FDP to just 5 percent.

Merkel is under increasing pressure from within her own party to show more leadership and vision on Europe. Her policy so far has been confined to putting out fires, say pro-European critics in her Christian Democratic Union (CDU) who believe the crisis should be seized as an opportunity to forge ahead with a political union for the EU.

Commentators say it is unclear whether Merkel will need the SPD's help in parliamentary votes on euro crisis measures. But the pledge nevertheless amounts to symbolic support that may prove valuable.

"If the three politicians stand by ther pledge, this amounts to a significant offer of political help for Angela Merkel. Of course, the trio was also acting in its own interest. The Greens are trying to portray themselves as the Europe party. Jürgen Trittin (editor's note: the Greens' parliamentary group leader) is clearly trying to position his party as the genuine successor to Helmut Schmidt and Helmut Kohl. The SPD obviously doesn't want to take that lying down."

"Sigmar Gabriel, Frank-Walter Steinmeier and Peer Streinbruck -- with the latter as the party's strong man -- didn't confine themselves to making tactical statements. They placed the euro in the same context as Helmut Kohl did -- as the unifying force binding together a continent that became embroiled in senseless wars in the days when it had no overriding common interest. That may seem like pathos to people born after 1989. But Steinbrück outlined credibly that there is a link between interest rates and peace. That is important. The more parties realize this, the greater the chance that Germany can push through its own interests in the Brussels poker game."

"The time has come to explain what is at stake: everything the Europeans have built in the past decades, all the blessings of a unified Europe that are now taken for granted to such an extent that many people scarcely notice them. The SPD wouldn't be helping itself if it just sat back and enjoyed the comforts of opposition right now. So it has made a statesmanlike offer of help. Wether the chancellor will need it is quite a different question."

"The message of the three Social Democrats is that Angela Merkel isn't showing leadership in the euro crisis. Their offer of cooperation is a slightly poisoned chalice. We're ready, they say, to support you in the public debate and in parliament, even if unpopular decisions need to be taken. What they don't say, but are thinking is: If you're too scared...."

"The three Social Democrats are helping the chancellor ahead of the crisis summit on Thursday by supporting a debt rescheduling and a debt cut for Greece. They have helped establish it as a German issue. The fact that it was Steinbrück who made that comment, as the only one of the three without an official role in the party, should be taken especially seriously by Merkel. It shows that the SPD leadership is clever enough to portray itself in this crisis as something the German government most definitely is not: clear, decisive and -- united." 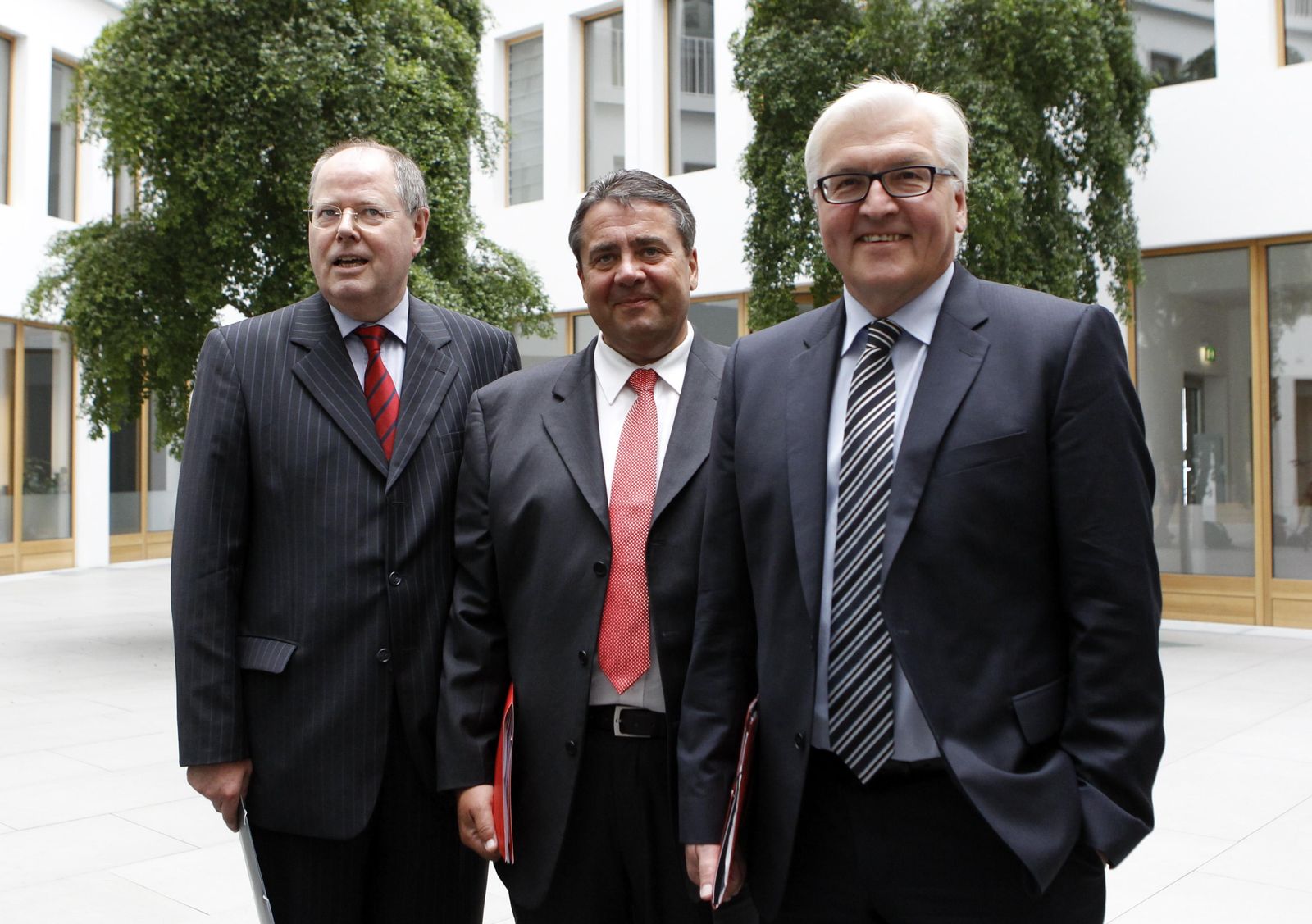