Chancellor Angela Merkel and French President Nicolas Sarkozy ruled out euro bonds for the foreseeable future at their summit in Paris on Tuesday, and the closer fiscal coordination they proposed for the euro zone has failed to convince markets.

World stocks and the euro fell on Wednesday due to concern that the plans for a "true" euro-zone economic government, for a German-style balanced-budget clause enshrined in the national constitutions of all 17 euro member states and for a financial transaction tax would not be enough to stop the euro debt crisis from escalating.

There had been speculation that the two leaders might signal the introduction of jointly-issued euro bonds, seen by many market players and by some senior European Union officials as the best way to contain the crisis. But such a move was highly unlikely given bitter opposition to it within Merkel's center-right coalition. Observers have noted the step would also require changes to the European Union treaties and possibly face public referenda in some EU member states, meaning it would likely take at least a few years before euro bonds could be introduced.

Markets have also been unsettled by Germany's sharp economic slowdown after official data on Tuesday showed Europe's largest economy expanded by just 0.1 percent in the second quarter from a revised 1.3 percent in the first.

That decline makes it even less likely that Merkel will sign up to measures such as euro bonds that would increase the burden and the risk for German taxpayers.

German media commentators say Tuesday's Franco-German summit produced little of substance, and that Germany's weakening growth, blamed in part on a slowdown in consumer spending, shows that households are increasingly worried about the impact of the euro crisis on their income. Some editorials express relief that Merkel didn't sign Germany up to euro bonds.

SPIEGEL ONLINE writes that Merkel and Sarkozy came up with "big words, but little deeds."

"The chancellor and the president presented a three-point plan that offers up old demands and proposals as a solution to the debt crisis, peppered with a bit of rhetorical verve. The diplomatic sherpas evidently already had the texts in their briefcases before they arrived, because the news conference after the summit started a half hour earlier than planned.

"One week after the dramatic slump in financial markets, the Paris meeting failed to come up with any even remotely weighty decisions that could be interpreted as a sign of a new departure -- especially as Merkel and Sarkozy rejected euro bonds and an increase in the rescue fund."

"Will THAT be enough to calm financial markets …? France and Germany, Angela Merkel and Nicolas Sarkozy, have met -- and decided. But what have they decided? The 17 euro states are to get a common euro economic government. That's good in principle -- they have needed that for years. Because only countries that tick in a similar way can shoulder a common currency. But can a body headed by the friendly European Council President Herman Van Rompuy, which meets twice a year, really take efficient decisions?"

"In addition, the euro member states are to enshrine a debt brake into their constitutions. But: that already exists -- the Maastricht Treaty, that everyone is ignoring these days."

"These are good ideas, but it all depends on whether they are put into practice."

"As long as the countries of the euro zone -- and the United States -- don't finally get to grips with the debt and confidence crisis, it will remain hanging over the economy like the Sword of Damocles."

"No one can reliably predict what effects the stock market crash in recent days will have on the sentiment of consumers and companies. German consumers have already been holding back in recent months despite significant increases in ther income."

"There is the risk of a double setback too. Falling growth rates make it even harder for debtor countries to cope with their burdens -- and they lessen the readiness and the ability of the economically strong partners to help them."

"At present, most economists are interpreting the weakening of German growth as a return to normality and are hesitating to cut their economic forecasts significantly. But the risks are growing. "

"Many Germans are worried. First, they were called on to iron out the financial sector's escapades with gigantic rescue packages, and now they're supposed to pay for the economic mistakes of several euro member states. They are well aware that the bill for that will be higher taxes or higher inflation. Given that outlook, they are reluctant to go out and consume. Instead, they are hoarding cash in their accounts, swiftly buying property or investing in gold. The sooner Europe's politicians lessen the uncertainty surrounding the euro, the sooner the Germans will go out shopping again."

"She didn't keel over this time, our chancellor. There will be no euro bonds for the time being. And that is a very good thing. Germany, heavily indebted itself and suddenly confronted with a weakening economy, can't vouch for the whole of Europe's debt. And what spendthrift wouldn't immediately be tempted to shell out money again if he could get cheap credit?" 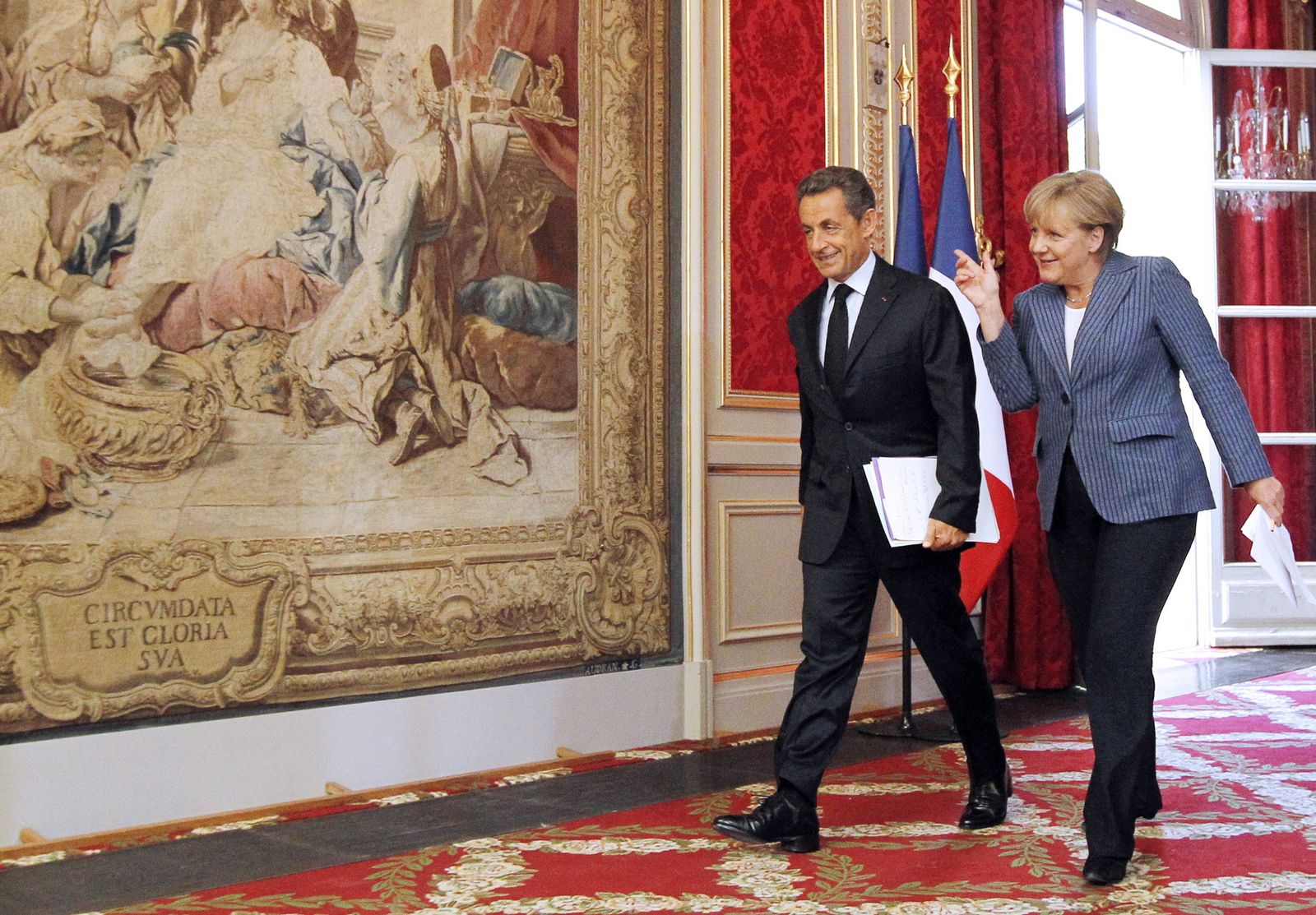 German Chancellor Angela Merkel and French President Nicolas Sarkozy prepare to address the press after their meeting on Tuesday.