The first part of the European Union's plan to help out ailing Greece has been hogging most of the headlines. On Sunday, European governments and the International Monetary Fund agreed to provide Greece with €110 billion ($145 billion) in loans over the next three years. The controversial decision was only reached after the Greek government pledged to implement yet another round of austerity measures, which have triggered massive protests and strikes throughout Greece.

But a separate aspect of the agreement has proven just as difficult for many to swallow. The European Central Bank (ECB) elected to suspend its minimum credit rating requirement in order to issue debt to the Greek government. The ECB will accept Greek bonds as collatoral despite the fact that ratings agencies lowered Greece's rating to junk status last week.

The move was seen as necessary to avoid a Greek bankruptcy and to prop up the European common currency, the euro.

"This is basically telling us that no euro-zone country will have its sovereign debt excluded from ECB refinancing operations," Fortis Bank economist Nick Kounis told Reuters. "Europe is coming together, and they see the threat of a kind of European Lehman event if there was to be a Greek default."

As the largest state among the 16 countries belonging to the euro zone, Germany's contribution to the bailout package will be the biggest. On Monday, the cabinet of Chancellor Angela Merkel approved draft legislation that would see Germany loan Greece €22.4 billion ($29.6 billion) over the next three years. The German parliament will be considering the package later this week.

Though Merkel has stressed that helping stabilize the euro would lesson the potential harm to Germany's economy, the idea of bailing Greece out has been extremely unpopular in Germany, and Greece has been painted in the press as a country of tax cheats and incompetent regulators who have lived far beyond their means for years. On Tuesday, Germany's best-selling tabloid Bild even printed a sample letter that it urged readers to send to their government representatives demanding that they shoot down the proposed legislation so as not to reward Greece's "serial swindling."

In other papers, criticism of the ECB's decision was based on two factors. First, commentators were enraged that a special exception to the bank's long-held rules was being made for Greece not long after it had pledged to not do so for any euro-zone member. And, second, they accused the bank of being short-sighted and not contemplating how the shift in policy could endanger the bank if other euro-zone countries -- such as Spain, Portugal or Italy -- should run into problems similar to those of Greece.

"The (ECB's) goal of ensuring the survival of the euro zone is commendable. But this back-and-forth is completely inexplicable. Indeed, it was just last January that ECB chief Jean-Claude Trichet announced that it would stick to the rules and not make any exceptions for individual countries. But the further the rating agencies downgrade Greek bonds, the more permeable Trichet's limit becomes. In April, for example, the ECB permanently lowered to BBB- the minimum rating it would accept for swapping government debt for ECB loans. And now this minimum-rating requirement is being completely lifted -- though only for Greek bonds. It is a chaotic message and there is no end in sight. What is going to happen if the rating agencies now downgrade Portuguese bonds? Will the ECB make more exceptions and unsettle the markets yet again?"

"The (ECB) has correctly acknowledged its own responsibility for the euro zone's survival. But it lacks the courage to fundamentally alter the system by abandoning the questionable ratings of the agencies in favor of coming up with its own ratings. Surely there is enough expertise gathered in the bank for it to be able to gauge the creditworthiness of euro-zone states and rate their individual bonds on its own. Doing so would strip the rating agencies of their power and stop the bank from having to constantly adapt to their moves."

"The ECB has now shown that it can be swayed and doesn't care about its own rules.... Should there be interest in stripping ratings agencies of their power, all that is needed is to no longer use the ratings as the banks' benchmark for measuring capital. But no one is doing that. The ECB's decision to accept Greek bonds of any quality is nothing more than a political contribution to the rescue package -- and thereby a blow to its own independence. An organization that is so willing to accomodate political decisions loses some of its standing and invites governments to exert even more influence over it."

"Under normal circumstances, the ECB is rather finicky, taking only top-rated securities onto its books. But since the outbreak of the crisis, it has already lowered its requirements once.... It's now likely that a whole flood of Greek bonds will flow into the ECB and do some damage to its balance sheet. But that won't hurt the euro's value in and of itself. As long as Greece can make payments and winnow away at its debt in an orderly manner, this decision won't have major negative consequences.... The ECB actually has no choice but to stash away this Greek junk. If they don't, Greek banks won't be able to keep their heads above water."

"With an eye on Greece, the ECB has unceremoniously announced that it will now accept state bonds that the rating agencies have classified as junk. It might sound like merely a technical detail, but it also represents a significant sin. ECB President Jean-Claude Trichet has made it clear to the entire world that his words carry no more value. At the beginning of April, he pledged that the securities of no country would be given preferential treatment. But now the ECB has given a free ticket to all countries that are deficit offenders. In doing so, the bank has lost its innocence."

"The consequences are dramatic. How is the ECB supposed to justify its actions when it raises interest rates to fight inflation, even when that simultaneously hurts its program for Greece? The whole purpose of having a central bank is to watch over the savings of a population and to guarantee the stability of its currency's value. If people lose their faith in it, they will cease to make long-term plans. But if the ECB president can throw important principles out the window within just a few weeks' time, how should the euro continue to remain stable for decades?"

"Europe's politicians and central bankers have failed to answer these questions. They put out the blaze in Greece knowing full well that there wouldn't be enough water left for Spain, Portugal and Italy. And, in the crisis, they have also sacrificed the credibility of almost all EU institutions, from the European Commission on down to the central bank. These are the true costs of rescuing Greece."

"If you take a closer look at the situation, you can see that European politicians sealed the fate of their currency union over the weekend -- at least that of the currency union that was proudly celebrated when it was launched in 1999. The only thing left over from the noble idea is a transfer union, something which was expressly forbidden by the Maastricht Treaty. And if the Greeks don't keep the promises that they are now being forced to solemnly declare, this transfer union could be quickly torn apart."

"The ECB and the central banks of European countries have fallen by the wayside. In the future, they will not be able to claim that they warned of the dangers or even pushed for a discussion of possible alternatives. Politicians have rolled right over them; and they are holding their tongues while bringing an unlimited amount of Greek junk bonds onto their books."

"Their job requires central bankers to be optimistic. But, even so, they should have given at least some thought to what would happen if Greece were to temporarily abandon the currency union. Doing so would not damage the EU pact any more than it already is now. But the Greeks would also be given a chance to start over with a devalued currency.... The damage to Europe would have been smaller. We should have expected more from the guardians of Europe's common currency." 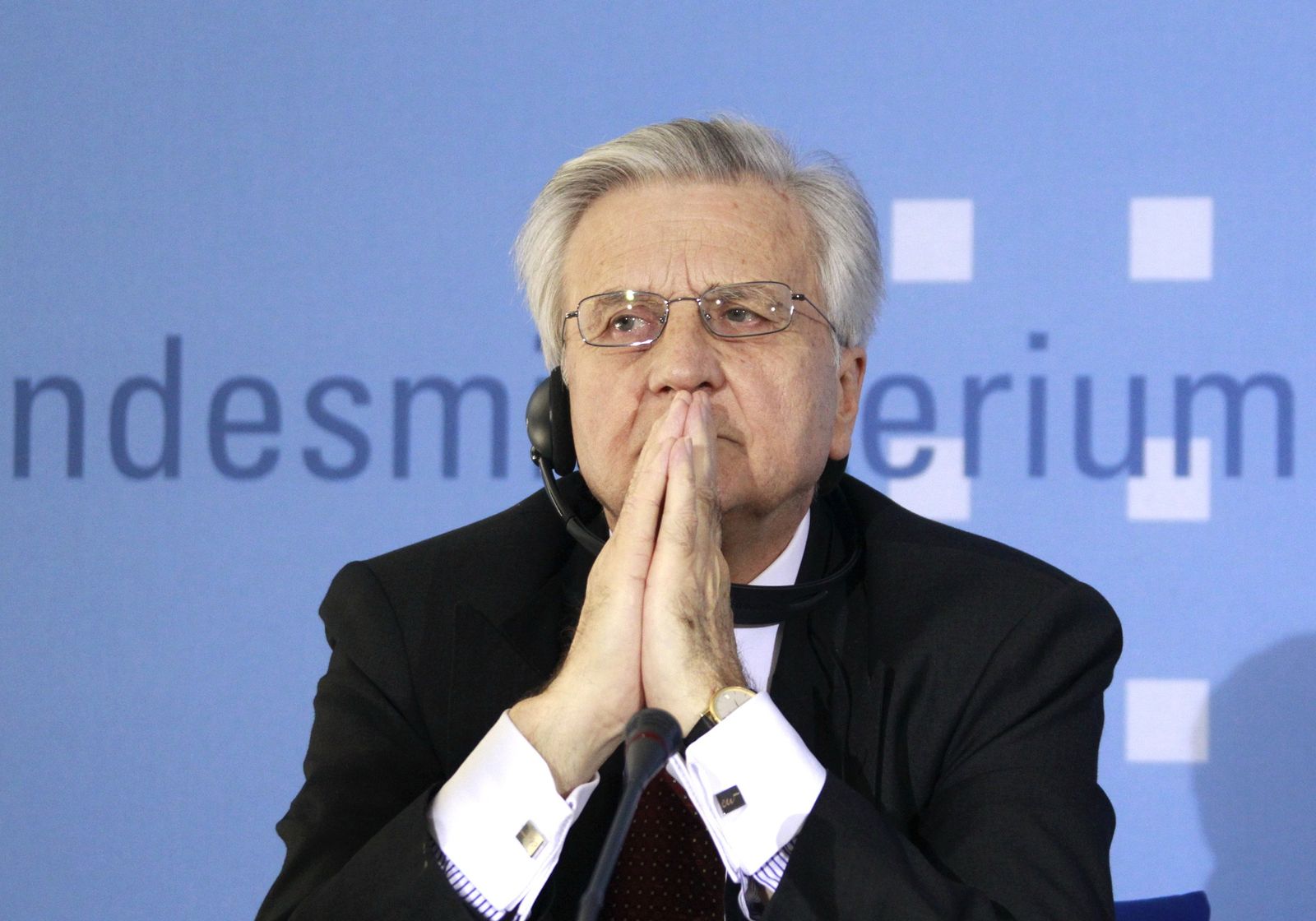