The European Central Bank may not think much of the German government's plans to save Greece from its debt crisis, but at least German Finance Minister Wolfgang Schäuble has found support at home. On Friday, the German parliament, the Bundestag, voted in favor of a motion that clears the way for more aid for Athens.

The motion was proposed by the coalition parties -- the conservative Christian Democratic Union, its Bavarian sister party the Christian Social Union and the business-friendly Free Democratic Party -- and ties support for a new bailout to certain conditions. Those include the involvement of private creditors in a new rescue effort and greater privatization and austerity efforts on the part of the Greeks. The non-binding motion is designed to provide Berlin with guidelines for upcoming negotiations with Germany's European partners over a new bailout package for Greece.

It is unclear, however, if Berlin will be able to push through its plan to make private creditors share the pain, something that the European Central Bank is resisting. On Thursday, ECB President Jean-Claude Trichet said he opposed any involvement of the private sector that was not "purely voluntary." But on Friday his deputy Vitor Constancio said there might be room for compromise, explaining that Trichet was keen to avoid any approach that would trigger a so-called "credit event," which would have serious consequences for investors. Some observers argue that the ECB is opposed to a restructuring because it itself now holds so much Greek debt.

In a government statement on Friday morning ahead of the vote, Finance Minister Schäuble warned of the consequences of a Greek default. "The situation in Greece, and hence in Europe, is serious," he said. He insisted on the importance of securing the next round of aid payments for Greece, worth €12 billion ($17.4 billion), which is due at the start of July. "If this tranche is not paid out, there is an acute danger of a Greek insolvency, with serious consequences for the stability of the whole euro zone," he said.

That tranche is in jeopardy, however. The report on Greece's progress prepared by the "troika" of the European Commission, European Central Bank and International Monetary Fund, which was obtained by SPIEGEL ONLINE earlier this week, revealed that a Greek insolvency within the coming 12 months could not be ruled out. That means that the IMF is unable to transfer its share of the next tranche of aid to Greece, making a new EU bailout necessary if Greece is to avoid default.

On Friday, Schäuble also repeated his proposal, made in a letter sent to Germany's euro-zone partners earlier this week, that creditor banks swap old Greek government bonds for new ones with maturities that are seven years longer.

In Brussels, EU officials believe that Greece's funding needs have risen to an estimated €120 billion, according to Reuters. A new aid package is expected to be created comprising some €90 billion in EU-IMF bailout funds, including the participation of private investors. The remaining €30 billion is intended to come through the privatization of Greek government-owned assets. The decision over the second aid package may be considered as soon as the next summit of EU leaders on June 24.

German commentators on Friday take a look at the latest efforts to save Greece, with a focus on the ECB's opposition to debt restructuring.

"This time around, Schäuble seems to have at least won the support of Chancellor Angela Merkel for his idea of a 'soft' debt restructuring involving private creditors. But the whole thing reeks of internal political maneuvering designed to keep the growing number of skeptics in the coalition ranks in line. It's hardly surprising that the financial markets remain unsure and have no confidence in the rescue efforts. Instead of being the motor of European integration, the single currency now looks more like a bomb ticking away within the EU."

"Amid the sea of uncertainty, only one thing is certain: The EU is at a crossroads. It has become clear that the economic and monetary union does not have the tools at its disposal to act quickly and decisively in crisis situations. The crisis also shows just how far the financial and economic interdependence of the EU's member states has developed in recent decades. Countries are happy to receive the advantages of this integration, such as free movement of labor, development funds from the Brussels pot or low interest rates on the capital markets, even for highly indebted countries. But they also like to circumvent those things that they should accept in return, such as fiscal discipline and tougher competition. Only now has it become clear to everyone that you cannot simply pull threads out of the fabric of European integration without risking tearing the entire thing apart."

"When it comes to the construction of the next bailout for Greece, all the stakeholders are lying through their teeth to such a degree that one hardly knows who one should point the finger at first. The thing that unites them is that none of them want a solution that will really involve private creditors, irrespective of whether you want to call that a default, rollover or debt restructuring."

"The decision in favor of another rescue package is based more on political will than on a sober analysis of the data. To their shame, the troika did not even try to find out whether the conditions that they had previously set for help have been fulfilled. In theory, an analysis should provide information about whether Greece has any chance of getting back on its feet in the medium term with the help of loans. The fact that the troika has so far avoided carrying out that analysis can only mean one thing: The rescuers do not want to know the answer, because they fear the consequences of an inconvenient outcome."

"Under Jean-Claude Trichet, the ECB purchased Greek sovereign bonds on a large scale, which are now rapidly losing value. It would have been better off leaving this rescue effort to national governments, because it has now made the ECB into a stakeholder with its own interests, just like the Greek government or Deutsche Bank."

"Faced with the question of whether a debt restructuring for Greece will help the country get out of its crisis, or if it will unleash a firestorm across Europe, ordinary people need the help of an independent opinion, because governments and commercial banks are pursuing their own interests. But the ECB is no longer independent. As one of Athens' major creditors, a haircut on Greek debt would cost it a lot of money. As a result, its warning about a debt restructuring are not credible."

"The ECB should not support any poorly prepared restructuring measures for Greece, which would ultimately involve it preventing the collapse of the financial system by vastly overstretching its own rules. Instead, it should help to lay the groundwork for a sound debt restructuring."

"It is all a question of credibility. Last year, the ECB received a thorough verbal beating when it -- quite correctly -- purchased the bonds of ailing euro-zone members to prevent a collapse of the common currency. If it were to buy bonds on an even larger scale, the result would be a storm of indignation and criticism."

"But credibility has many facets. The ECB is now the most important economic institution in Europe. … In the middle of a severe crisis in the euro zone, the ECB cannot simply duck its responsibilities. … It would be a good idea if the ECB were to vigorously encourage governments to create the necessary conditions for a restructuring of Greek debt. And that mainly means coming up with a solution for saving the Greek banking system, conducting meaningful stress tests to show that other European banks could deal with a debt restructuring, and choosing a form of debt relief that will allow Greece to make a new start and later return to the capital markets."

"The euro was a bold historical experiment. Never before had 17 independent states adopted a common currency. The next two years will show whether the euro will survive. … The investors are optimistic. Despite the crisis, the euro was trading Thursday at 1.46 against the dollar -- almost a record high. Investors apparently believe that the US is more likely to become a problem case than the euro zone."

"The investors' optimism shows that they are not particularly concerned with what voters (who oppose a bailout for Greece) think. They are depending on politicians and the European Central Bank to save the euro. Investors are taking it for granted that Greece will somehow be saved. This is a rational position. At the end of the day, the ECB would not exist without the euro, so it can be assumed that the central bank will do everything possible to save the single currency. As the Austrian economist Stephan Schulmeister told this newspaper back in January, institutions' self-preservation instincts should not be underestimated." 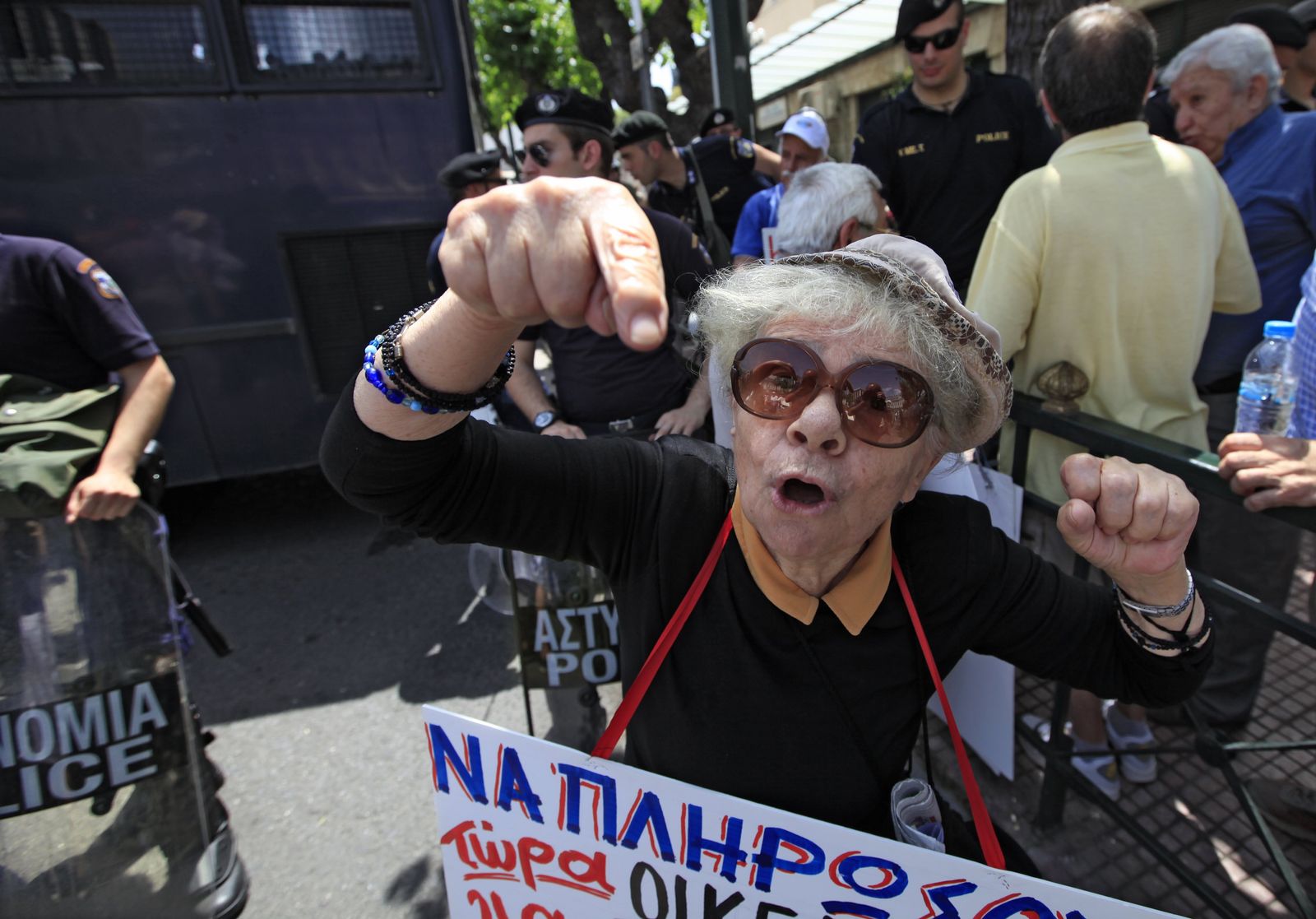 A protest rally in Athens against a new austerity package on Thursday.