The agreement on the Portuguese side was reached more quickly than many had anticipated. On Thursday morning, Portuguese Finance Minister Fernando Teixeira Dos Santos announced that the leaders of the country's largest opposition parties had given the green light to the agreement between Lisbon, the European Union and the International Monetary Fund.

In a joint statement on Thursday, European Commissioner for Economic and Monetary Affairs Ollie Rehn and IMF head Dominique Strauss-Kahn emphasized that the aid package, worth €78 billion over the next three years, has the strong backing of all major political parties in Portugal.

"The Portuguese authorities have put forward a bold, multi-year reform program aimed at overcoming the country's economic challenges," Strauss-Kahn said in a statement. "Above all, it aims to boost growth and employment."

But it won't boost growth immediately. Teixeira dos Santos confirmed that higher taxes and deep cuts in spending are likely to mean that the Portuguese economy will shrink by 2 percent in both 2011 and 2012. But the interest rate charged on the loan is likely to be lower than the 6 percent charged Ireland for its €85-billion bailout -- a rate that is likely to be lowered soon.

As Low as Possible

Chancellor Angela Merkel said on Thursday that the package for Lisbon must be based on realistic economic growth projections, according to an Associated Press report.

The package must still be approved by all 17 members of the euro-zone. Recent elections in Finland, which saw the right-wing populist party True Finns receive 19 percent of the vote, could complicate the approval process. The party has said it is adamantly opposed to euro-zone bailouts, joining the country's Social Democrats in the hard-line stance. German commentators on Thursday took a look at the bailout package.

"The European Central Bank, the International Monetary Fund and European governments have become professionals when it comes to assembling bailout packages. And the capital markets hardly react anymore to billion-euro backstops. Is that more than just habituation? Can one hope that the debt crisis is coming to an end? That would be too wonderful to be true."

"Unfortunately, the markets have indicated exactly the opposite when it comes to Greece. Despite the bailout, Greece must pay 25 percent interest on its bonds. The message is clear: The attempts to solve the crisis thus far have failed and the market expects a restructuring of Greek debt. Although Greece has been making huge sacrifices for more than a year and has received billions of euros from the EU, the country is still far from economic or financial health. The targets set for saving Greece will not be met and hopes that rapid aid would prevent the country's illness from spreading have likewise been dashed. Europe's debt crisis has revealed itself to be a fundamental crisis of the political and economic structures of many euro-zone countries. A lasting improvement can only be made with fundamental structural reforms -- in Greece, Ireland, Portugal and beyond."

"Portugal has the luck, dubious though it may be, of being the third euro-zone country, following Greece and Ireland, to receive aid in its time of emergency. The case of Greece in particular has demonstrated that shock therapy isn't especially effective. Which is why the conditions for Lisbon are not nearly as draconic as they were for Athens. Portugal, for example, now has more time to reduce its deficit than the European Union recently demanded. That is a good thing. Otherwise, the recession that Portugal has been damned to in the near future would be deeper and longer. But it is doubtful that the European debt crisis has now come to an end. It also remains to be seen whether Portugal, which has been stagnating for years, will be able to find that which it needs most: the strength to reinvent itself."

"There are good reasons for bailing out Portugal.... But there is a fundamental problem in the European Union. Despite months of discussions, EU political leaders have still not reached a consensus as to the path out of the crisis.... Indeed, top politicians still haven't even been able to answer the vital question as to whether investors should bear the risks of their ill-advised investments in bonds from Greece and Portugal or whether banks should be granted a free lunch."

"The fact that there is no clear position on the issue is shocking. Many would like to see the banks get away scot-free. And that may be advantageous when it comes to the stability of the financial system. But that would mean that euro-zone taxpayers would once again have to assume the costs of a crisis which began with bank stockholders making good money. That's not how the free market economy works. It would be nice if the EU were to realize that fact."

"Perhaps the best aspects of the demands Portugal must meet in exchange for the aid package it will receive are the structural reforms. Portugal's biggest problem has been, as in Greece, the public sector -- and several reforms are aimed at improving the situation. Processes in central and regional administrations are to be made more efficient, vacant positions are to be left unfilled and a number of state-owned companies are to be privatized."

"There are also to be radical changes to the country's welfare system. In the future, the jobless will no longer receive much more than €1,000 per month and welfare will be paid for just a year and a half instead of three years. That could have a similar positive effect on unemployment as reforms passed several years ago in Germany." 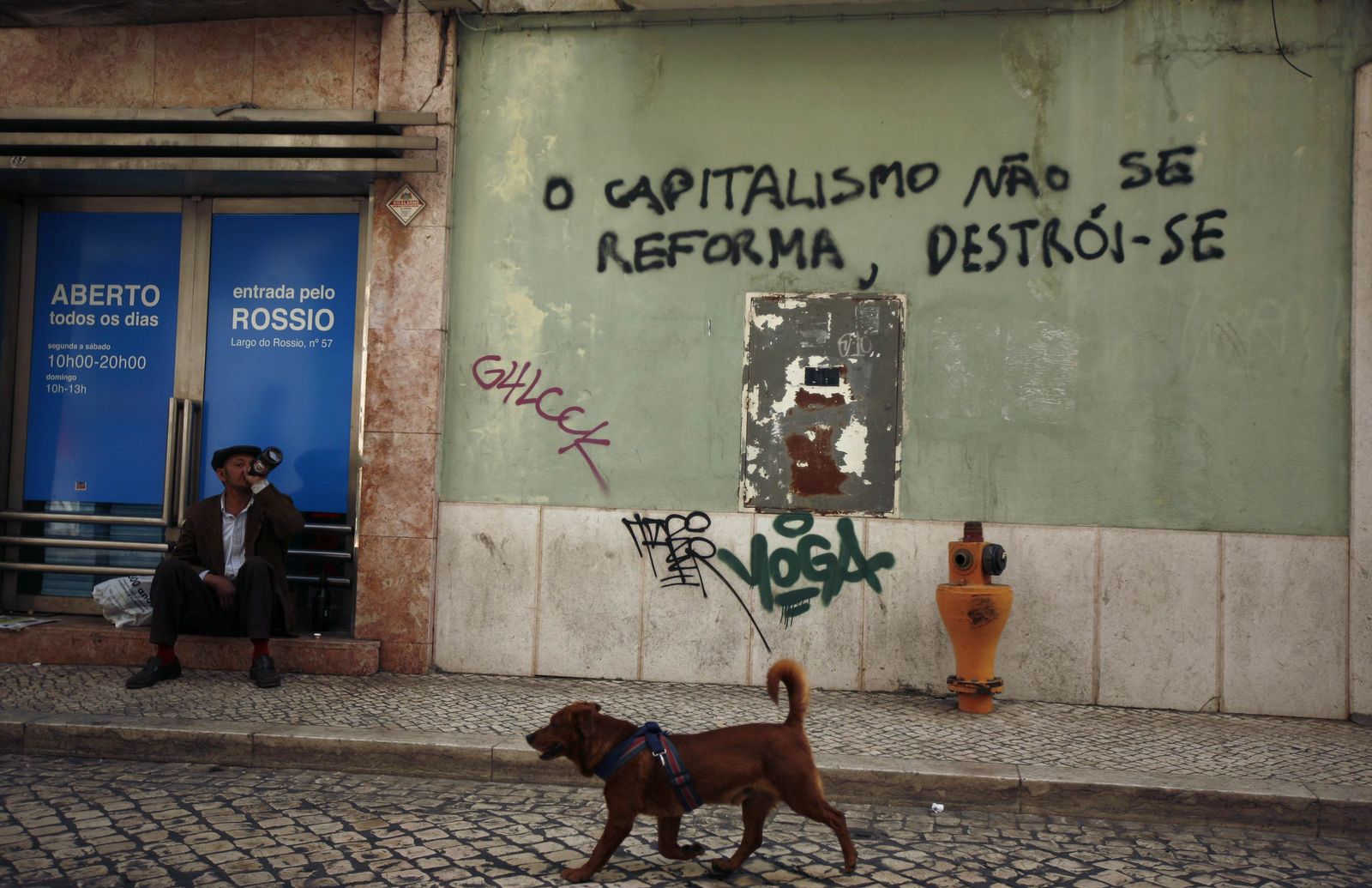 A man in Lisbon next to graffiti reading "capitalism doesn't reform and must be destroyed." An agreement was reached on a 78 billion bailout package for Portugal on Wednesday.