Tuesday's ceremonies in the Polish port city of Gdansk to mark the 70th anniversary of the outbreak of World War II on Sept. 1, 1939 had been clouded by a historical debate between Russia and Poland about the causes of the conflict in which 60 million people died.

Germany's responsibility for the war is undisputed. But the Poles and other former Soviet satellite states want Russia to atone for Stalin's collusion with Nazi Germany in the non-aggression pact that freed Hitler's hand to invade Poland. Seventeen days after Nazi Germany marched in from the west, the Soviet Union annexed the east of Poland under a secret deal between Hitler and Stalin to carve up the country and other parts of eastern Europe. Poland has also long been seeking a Russian apology for the Soviet massacre of thousands of Polish officers in Katyn Forest in 1940.

Meanwhile some historians in Russia have gone as far as to suggest that Poland brought the war on itself by refusing to accept Hitler's "modest" territorial demands, and even that the infamous non-aggression pact was necessary to prevent Poland from joining forces with Germany to attack the Soviet Union.

Seventy years on, the interpretation of the war and its causes still haunts Europe, especially eastern Europe, and continue to influence modern-day politics.

So all eyes were on Russian Prime Minister Vladimir Putin on Tuesday when he joined German Chancellor Angela Merkel along with the Polish government leaders and less senior representatives from France, Britain and the United States and other nations to commemorate the invasion that began at 4.45 a.m. on Sept.1, 1939. That was the minute when the German battleship Schleswig-Holstein started the war by opening fire on a Polish military depot on Westerplatte, a peninsula in the port of Gdansk.

Putin stopped short of an apology for Katyn in his speech at the memorial to the 205 Polish defenders of the Westerplatte fort who held out for seven days despite being vastly outnumbered and outgunned.

But German media commentators say his speech was conciliatory enough to prevent further damage to Polish-Russian relations, and looks set to prompt research by the two countries into Poland's darkest hour. Putin and Polish Prime Minister Donald Tusk agreed to set up joint teams of historians to study the Katyn massacre, for example.

Unsurprisingly, the war continues to traumatize Poland -- some six million citizens of its citizens died in the war, of which three million were Jews. That's some 17 percent of the population, a greater proportion than any other country lost.

"It is necessary to understand that any cooperation with extremists -- that is, with the Nazis and their henchmen if we talk of World War II -- whatever the motives, leads to tragedy," Putin said.

'I Bow Before the Victims'

"Therefore, one must admit that all the attempts to appease the Nazis undertaken between 1934 and 1939 by striking various agreements and pacts with them are inadmissible from the moral point of view and from the practical, political point of view are senseless, detrimental and dangerous."

"Certainly, one must admit these mistakes. Our country has done it. We sincerely want Russian-Polish relations to be also cleared of this residue of the past, developing in the spirit of good-neighbourliness and cooperation to be worthy of the two great European nations."

Speaking at the dawn ceremony, Polish President Lech Kaczynski voiced his anger at the Soviet role at the start of the war. Referring to the occupation of eastern Poland by Soviet forces a fortnight later, he said: "On Sept. 17 ... Poland received a stab in the back... This blow came from Bolshevik Russia."

As expected, German Chancellor Angela Merkel found the right words, saying: "I commemorate the 60 million people who lost their lives because of this war unleashed by Germany. There are no words that can come close to describing the suffering of this war and the Holocaust. I bow before the victims."

But her mention at another point in her speech of the plight of the millions of Germans expelled from what is today Poland and the Czech Republic after the war was inappropriate given the occasion, said one commentator.

"The 20 government leaders who came to Poland to share in its remembrance of this darkest hour of its history experienced a history lesson with a clash of views between Polish President Lech Kaczynski and Russian Prime Minister Putin regarding Versailles and Russia's 'stab in the back.' The German chancellor did well to stay out of this debate. Her unqualified acknowledgment of Germany's responsibility for the unspeakable atrocities of the Nazi tyranny and her recognition of Poland's exceptional suffering allowed her to put in a word for the expellees at this place of remembrance for Poland's heroes."

"Nothing the Nazis did in the West came close to the war of extermination they waged in the East. The German occupiers shot dead Polish teachers and plundered Ukrainian museums and planned a gigantic colonial empire in which Slavic helots were to serve German masters. The Soviet Union lost 25 million people in World War II, 70,000 towns, settlements, villages were destroyed. In Belarus alone around a quarter of the population died.

"The figures would have been lower if the Nazi terror had not been accompanied by the Red terror, the deportations of entire ethnic groups, the political paranoia, the denunciations."

In Russia, the memory of the victory over Nazi Germany "has recently served as a basis for praising strong government and criticizing the eternally morally unreliable West. Russian state television has even been trying to blame Poland for the outbreak of the war. And for years there's been a growing sentimental ignorance in which Stalinism is regarded as a feelgood dictatorship free of gulags."

"But Moscow's complaint that the West has not sufficiently honored the Soviet contribution to overcoming the Nazi regime is justified... Barack Obama showed an astonishing lack of instinct when he dispatched no one more senior than his National Security Advisor to the ceremony in Gdansk commemorating the 70th anniversary of the outbreak of war."

"But this day wasn't about America, and it wasn't even about Germany. The most recent dispute about the origins of the war and the blame for it left the country that started the disaster remarkably untouched. Germany, after a major reconciliation effort in which it declared its moral bankruptcy, has returned to the group of civilized nations and was rewarded with prosperity. It hasn't been so easy for its former victims in the East."

"Russian Prime Minister Vladimir Putin found conciliatory words in Gdansk and had already condemned the Molotov-Ribbentrop pact on Monday. If a joint commission of Russian and Polish historians is really set up to investigate the massacre of tens of thousands of Polish soldiers in Katyn forest, if the archives in Moscow and Warsaw are opened, those would be the right steps.

"In the east of Europe, history is more virulent than in most other places. It is part of everyday politics, like the dispute over pipelines and renegade republics. The enforced loyality has vanished and the new alliances are still untested.

"But the conflict surrounding the appalling, highly complex and therefore so very European history of this region, where the heroes of some are traitors to others, can be overcome. The reconciliation between Germany and France could serve as a guide. It succeeded after just 100 years of enmity."

"German Chancellor Angela Merkel found the right words. She said: 'German started World WarII. We brought immeasurable suffering to the world.' It was the German government leader's first appearance at a memorial ceremony to mark Sept. 1 in Poland. It was the first such invitation Warsaw has ever extended to a German chancellor. Even the veterans who served on the Schleswig-Holstein which fired the first shots of the war had been invited. That says a lot about the quality of the German-Polish relationship in 2009. It's not good, but it's significantly better than could be expected. Merkel is seen as a partner, not as the leader of a country that started the war."

"Relations between Germany and Poland aren't as close as the ties that have grown between Germany and France since World War II. But the pragmatic relationship that has been cemented especially since Poland's accession to the EU marks an immense improvement compared with the past."

"By inviting the chancellor, the Polish government made a gesture that shouldn't be underestimated, it was an important contribution to improving ties with its larger neighbor even further."

"Before her trip to Gdansk she gave a television interview in which she acknowledged Germany's guilt for the world war but also added: 'Nevertheless the expulsion of well over 12 million people from the territories of the former Germany and today's Poland is of course an injustice and that too must be said.'"

"Merkel is right of course. But an injustice remains an injustice even when one doesn't refer to it for once. Merkel's reference to the expellee issue, which she luckily didn't repeat so clearly in her speech at the official memorial ceremony in Gdansk, was inappropriate. There is no more sensitive or emotive issue than this for Poles. As a German one should understand this -- and keep quiet at times.

"Chancellor Merkel wasn't motivated by a lack of historical awareness. She certainly doesn't suffer from that. It's the election campaign in Germany that made her say it. The expellees are an important group of voters for the conservatives. Wooing them is one of the foremost duties of a conservative government leader who wants to be re-elected."

"Merkel found the right words yesterday but uttered some of them at the wrong time."

"Putin's visit and his moderate tone in and towards Poland came as a surprise. The former Kremlin leader's visit brought movement into the rigid interpretation of history. That won't automatically improve relations with Warsaw. But Putin has at least opened a window for the debate about the war."

"At least Vladimir Putin conceded that there are 'good reasons' to condemn the Hitler-Stalin pact, and he didn't deny the murder of 15,000 Polish officers in Katyn. But the 'new pragmatism' between Poland and Russia that Putin called for can only truly happen when the Russian leadership no longer puts a taboo on the full extent of the crimes of the Soviet Union and its temporary complicity with Hitler." 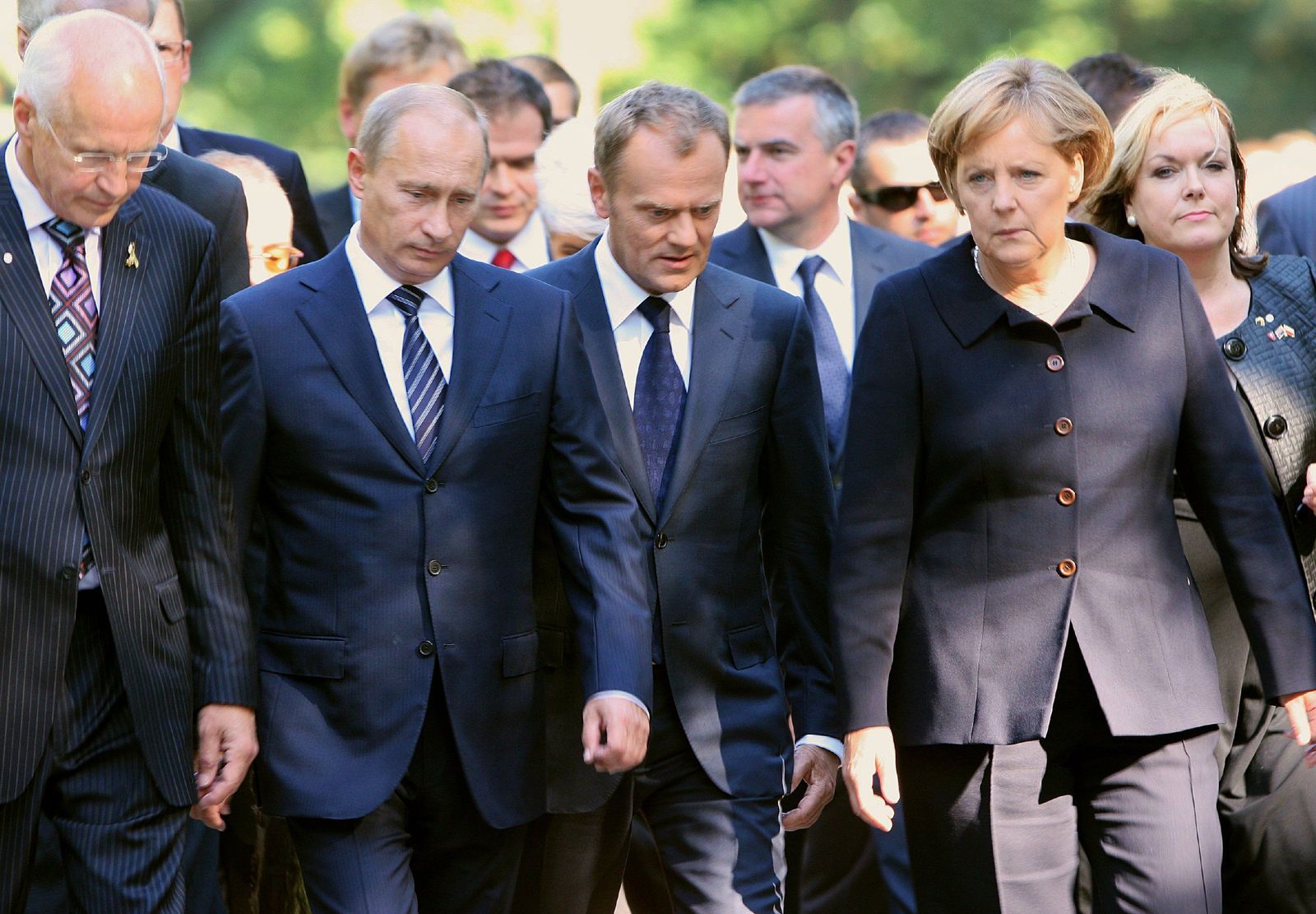