Russia appears to have launched a charm offensive aimed at the West. At last week's NATO summit in Lisbon, the alliance and Russia decided to cooperate on a missile shield, an agreement that Russian President Dmitry Medvedev described as "historic."

Then on Thursday, Russian Prime Minister Vladimir Putin presented his vision of a massive Eurasian free-trade zone in a guest editorial for the German daily Süddeutsche Zeitung. "We propose the creation of a harmonious economic community stretching from Lisbon to Vladivostok," Putin wrote in the piece. "In the future, we could even consider a free trade zone or even more advanced forms of economic integration. The result would be a unified continental market with a capacity worth trillions of euros." The proposal came as Putin traveled to Germany on Thursday for a two-day visit, including a meeting on Friday afternoon with German Chancellor Angela Merkel.

On Wednesday, Russia and the EU had reached an agreement on the elimination of tariffs on raw materials such as wood. The deal was an important prerequisite for the EU dropping its opposition to Russian membership in the World Trade Organization. Moscow is hoping to become a member in 2011.

The reaction to Putin's piece was mixed from the German side. German Foreign Minister Guido Westerwelle welcomed Putin's suggestion. "The Russian prime minister's proposal shows how close we are in terms of our strategic goals," he told the Süddeutsche Zeitung. "We want to expand the broad strategic partnership with Russia, including on economic issues."

On the sidelines of a business conference in Berlin on Friday where Putin was also speaking, Defense Minister Karl-Theodor zu Guttenberg described it as an "interesting proposal," but added the caveat that "there are certainly a few things that need to be done first."

Merkel was more reserved in her response, saying on Thursday that recent steps by Russia did "not exactly point in the right direction." Russia would have to become a member of the WTO first, she said.

Speaking at the conference, which was organized by the Süddeutsche Zeitung, Putin reinforced his calls for free trade, criticizing obstacles to Russian investment in Europe. Russian companies were keen to invest in European firms, he said, but encountered resistance from the European side again and again.

On Friday, German media commentators take a look at Putin's proposal. Most are skeptical, saying that Moscow is motivated mainly by worries over its economic future and that Europe should read the fine print carefully.

"Moscow is drawing conclusions from the financial crisis and the weaknesses of its own economy.  A pact between the EU and Russia could give it a boost.  Europe is Russia's most important trading partner. Almost half its imports and exports are with EU states. But the EU does not depend so closely on Russia, which is only the bloc's third-biggest trading partner, closely followed by Switzerland, whose population is just 8 million. Nevertheless, German firms like Siemens and Volkswagen could benefit from a closer relationship with Russia."

"But many questions are still open.  There is uncertainty about Russia's intentions. In his op-ed, Putin calls for 'strategic alliances' in sectors such as shipbuilding, aircraft construction and the automobile industry and calls for a 'common industrial policy.' In that respect, the governments in Berlin, Warsaw and Paris are unlikely to be terribly thrilled. They fear domination by the Russian energy giant Gazprom, which is still majority owned by the Russian state."

"In a newspaper article on Thursday, which was supposed to sound visionary, Putin proposed a free trade area between Vladivostok and Lisbon and a common industrial policy between Russia and the EU. Such ideas appear as smooth as a good Russian vodka -- but even the biggest Russophiles in Germany are taking them with a big pinch of salt."

"The economic policies of Putin's Russia are based on state capitalism and are sometimes protectionist. As such, the country has moved too far away from Europe. The government is forcing foreign investors to build plants in the country, no matter whether the demand is there or not. Moscow is trying to keep Europe dependent on Russian gas supplies, and has torpedoed its attempts to break away from the Kremlin's tight grip."

"Without political reform in the direction of greater democracy and a freer market, without Russia's accession to the World Trade Organization, and without the release of (imprisoned oligarch) Mikhail Khodorkovsky, proposals like those regarding the free-trade zone will remain nothing but a smokescreen that Putin is creating in a bid to polish his tarnished image in Europe."

"The Russian prime minister wants nothing less than a close relationship between East and West. Back in the summer, he was singing quite a different tune. At that time, Putin announced that Russia would raise import duties on cars, saying: 'We're not, after all, WTO members, so we can afford to do it.' Has the great chameleon Russia now decided to change its color once again?"

"The country has already been negotiating its entry into the WTO for 17 years. The signals were so mixed over the years that no one knew whether Russia really wanted to take that step or not. Now, though, the realization is taking hold in Moscow that there is no other choice. The global economic crisis may have caused great damage to many countries, but it left Russia in ruins. The country will not be able to head into the future relying on its oil, gas and metals any more. The model of a great power based on raw materials is a thing of the past, and Moscow can no longer depend on energy prices as it once did. Russia must open itself up."

"The opportunities and risks of such an opening have long since been thoroughly examined, and Russia has opted for modernization. In the long term, the country has more to gain than to lose.  Vladimir Putin and President Dmitry Medvedev know that Russia cannot be strong politically if it is economically weak."

"When the Russian prime minister calls for a 'harmonious economic community stretching from Lisbon to Vladivostok,' people in Berlin and Brussels should be extremely careful and make sure to read the small print. After the first vaguely worded calls for a 'free trade zone,' it already becomes clear what the prime minister really cares about. He wants Russian companies to have access to Western European know-how and capital -- but under Russian conditions."

"Putin knows that his country is at risk. The global economic crisis has made it clearer than ever how dangerous the dependence on raw material exports is for Russia: A collapse of oil or gas prices on the global market quickly poses an existential risk to the country's economy. At the same time, Russia is falling behind in comparison to other emerging economies: Brazil, India and China are pulling ahead both in terms of growth and their attractiveness to foreign investors."

"The Russian prime minister may have recognized the problem, but he has reached the wrong conclusions. The Russian economy cannot be modernized or diversified by the state acting out its fantasies about industrial policy. The country's potential can only be tapped when companies are given freedom and legal security -- and when they have to face international competition. Freedom, however, is an idea that Putin still finds it hard to get to grips with." 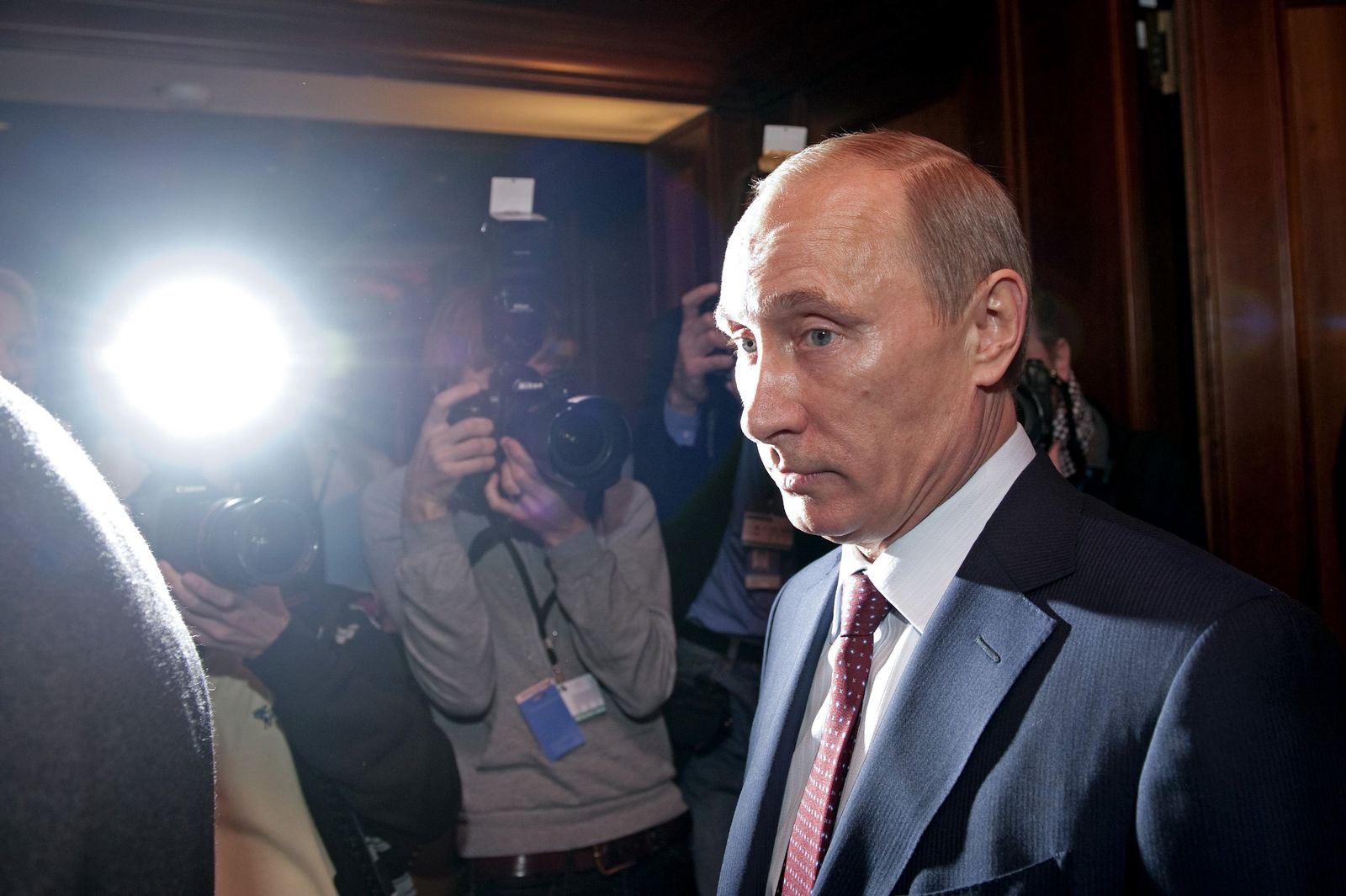 Russian Prime Minister Vladimir Putin arrives at a conference in Berlin on Friday: Putin has called for a free trade zone between Russia and the EU.