On the financial markets, confidence is everything. And European politicians and their fellow euro-rescuers are certainly doing their best to appear nonchalant about the latest downgrade by Standard & Poor's.

On Monday, the ratings agency downgraded the euro zone's backstop fund, the European Financial Stability Facility, by one notch from the highest AAA rating to AA+, potentially affecting the fund's ability to raise cheap money for euro-zone bailouts.

The head of the EFSF, Germany's Klaus Regling, reacted with conspicuous calm. Given that only one of the big three ratings agencies had downgraded the EFSF, it was "not really necessary" to take action, he said, speaking in Singapore on Tuesday. "The euro will not collapse," he continued, adding there was no reason for "excessive alarm." He stressed that no country will be forced to leave the euro zone.

Mario Draghi, president of the European Central Bank, also played down the significance of ratings agencies' judgments. "One needs to ask how important are these ratings for the marketplace, for the regulators and for investors," Draghi said Monday. He argued that investors should treat the ratings as just one piece of information to be considered in parallel to their own analysis.

German Finance Minister Wolfgang Schäuble was similarly dismissive of the rating agency's decisions. "I don't believe that Standard & Poor's has really understood what we in Europe have already set in motion," Schäuble told public radio station Deutschlandfunk on Monday.

Calls for a European Competitor

Meanwhile German Foreign Minister Guido Westerwelle has reignited the debate about whether the European Union should set up its own ratings agency. In an interview with the Tuesday edition of the regional newspaper Neue Osnabrücker Zeitung, he said that it was high time that the "Anglo-American" rating agencies were given more competition. He suggested that a European rating agency could be set up following the model of Germany's Stiftung Warentest, a Berlin-based independent consumer-reports foundation that Westerwelle said enjoys high credibility.

Some European politicians appear to believe that there is a conspiracy by American ratings agencies to beat down the euro zone -- conveniently ignoring the fact that one of the so-called Big Three, Fitch, is owned by a French company and has dual headquarters in New York and London.

On Tuesday, Sigmar Gabriel, the leader of the opposition center-left Social Democrats, poured scorn on such ideas. "I don't believe in the conspiracy theories that the evil USA is trying to ruin Europe," he told SPIEGEL ONLINE in an interview. "The fact that the ratings agencies cause a lot of damage doesn't necessarily mean that Standard & Poor's assessment of the European situation is wrong."

Observers pointed out that S&P's downgrade of the EFSF was entirely predictable, following Friday's downgrade of some of the countries that provide guarantees for the fund, including France, which lost its coveted triple-A rating.

The other two main ratings agencies, Moody's and Fitch, continue to give the EFSF their top AAA rating, meaning that the fund still counts as a top-tier choice for most investment funds.

Experts warn that if those agencies follow S&P's lead, however, it could complicate euro-zone efforts to fight the debt crisis. Under that scenario, the EFSF would either have to issue lower-rated bonds -- which would mean higher borrowing costs -- or the countries which still have AAA ratings would have to ramp up their guarantees, something that appears to be politically difficult. Germany, the biggest AAA-rated euro-zone member, has ruled out increasing its commitment to the EFSF.

European politicians can take some solace in the fact that the European Stability Mechanism (ESM), which is expected to go into operation in mid-2012 and will eventually replace the EFSF, will be less vulnerable to downgrades by rating agencies, as it will have paid-in capital, similar to a bank.

Meanwhile, investors on Tuesday seemed unfazed by S&P's downgrade of Spain. Madrid was able to easily raise €4.88 billion ($6.2 billion) in a bond auction on Tuesday. Yields on 12-month bonds fell to around 2.05 percent, down from 4.05 percent in the last auction of its kind in December.

On Tuesday, German commentators focused on the power of the rating agencies.

"The reaction is completely predictable. Whenever American ratings agencies do their job and downgrade European countries … the critics get all hot under the collar and threaten sanctions. That is the case now, once again."

"Of course, the ratings agencies have made mistakes in the past. It is also not their job to urge European governments to introduce new multi-billion stimulus packages or to tell the European Central Bank to pursue a monetary policy based on the model of the US Federal Reserve. But that doesn't stop (European politicians) from taking the populist approach and making the agencies into scapegoats, claiming their perception is skewed. But it is not the agencies that are the cause of the crisis; rather, it is the imbalances in the current accounts of euro-zone countries -- and the poor crisis management of EU leaders."

"Incidentally, it was the politicians who originally made the rating agencies and their credit ratings so important in the context of financial market regulation. For years, people in the investment business have relied on the expertise of the agencies. And now we are supposed to believe that their ratings suddenly aren't worth very much in terms of assessing countries' creditworthiness, simply because they don't fit into the rescuers' plans? That is absurd."

The Financial Times Deutschland focuses on S&P's downgrade of France:

"The government of French President Nicolas Sarkozy (and his opposition) couldn't have gone to more effort to transform this uninteresting verdict by a crummy rating agency into a major event."

"Everyone who is even slightly versed in the subject of ratings agencies knows that their ratings come after the fact. The case of France is a classic example of this. First, the prices of French government bonds (OATs) fell and those of German bonds rose. Then nothing happened for a while. It went on like that for a whole year. At times, the OAT 10-year yield was around twice the corresponding Bund yield. And now, after months of OAT weakness, S&P at last responds with a little downgrade."

"Ruling politicians and their entourage sound really odd when they criticize ratings agencies. For example, the leadership of Germany's ruling CDU party says the downgrade of France came at the wrong time. They point out that the French government has only just imposed austerity programs. Worse, they say, the ratings agency isn't taking the 'fiscal union' agreed by the EU government leaders seriously. Why should anyone take this agreement seriously? Fiscal union really means a common tax system. But there are no plans to do that."

"In the course of the past year, some wit came up with the name 'Merkozy.' The new word helped put into focus what had been obvious for months: the solidarity between Angela Merkel and Nicolas Sarkozy in the euro crisis, the joint leadership undertaken by France and Germany. That some in France immediately began to refer to 'Sarkel' is more than an amusing detail: It shows the nature of the German-French relationship. Sensitive souls in Germany's neighbor believed, in all seriousness, that the order of the names had political significance, and that the term 'Merkozy' proved that Sarkozy, as the second-named, played second fiddle to the German chancellor."

"The recent loss of France's top credit rating has made such considerations obsolete. Anyone who claims this has already been the status quo for months, is overlooking the fact that France has been able to compensate for its current economic weakness with great negotiating skill."

"The French economy is stagnating, and France must fear a further downgrade. That means the euro zone's second-biggest economy is in danger of falling ever deeper into the debt trap. Servicing its debt is already the country's single largest budget expenditure. Those costs now threaten to become even bigger. .... The fight against a downward spiral will have a decisive influence on French politics for the foreseeable future -- regardless of who is running the country."

"In its decision to downgrade nine euro-zone countries, Standard & Poor's referred to political arguments to a greater degree than is usual, and not only in relation to the individual states, but also in relation to the euro zone as a whole. Their skeptical view of the political decision-making structures includes some familiar clichés. The agency once again called for swift decisions on the euro rescue -- and implicitly called for (the ECB to use its) 'big bazooka' and provide unlimited resources for troubled countries."

"But the ratings agency is ignoring the fact that it's always difficult to make political decisions in the euro zone, due to different national interests and the need to consult national parliaments. The 'political union' that is currently being proposed as a universal panacea will do nothing to change that." 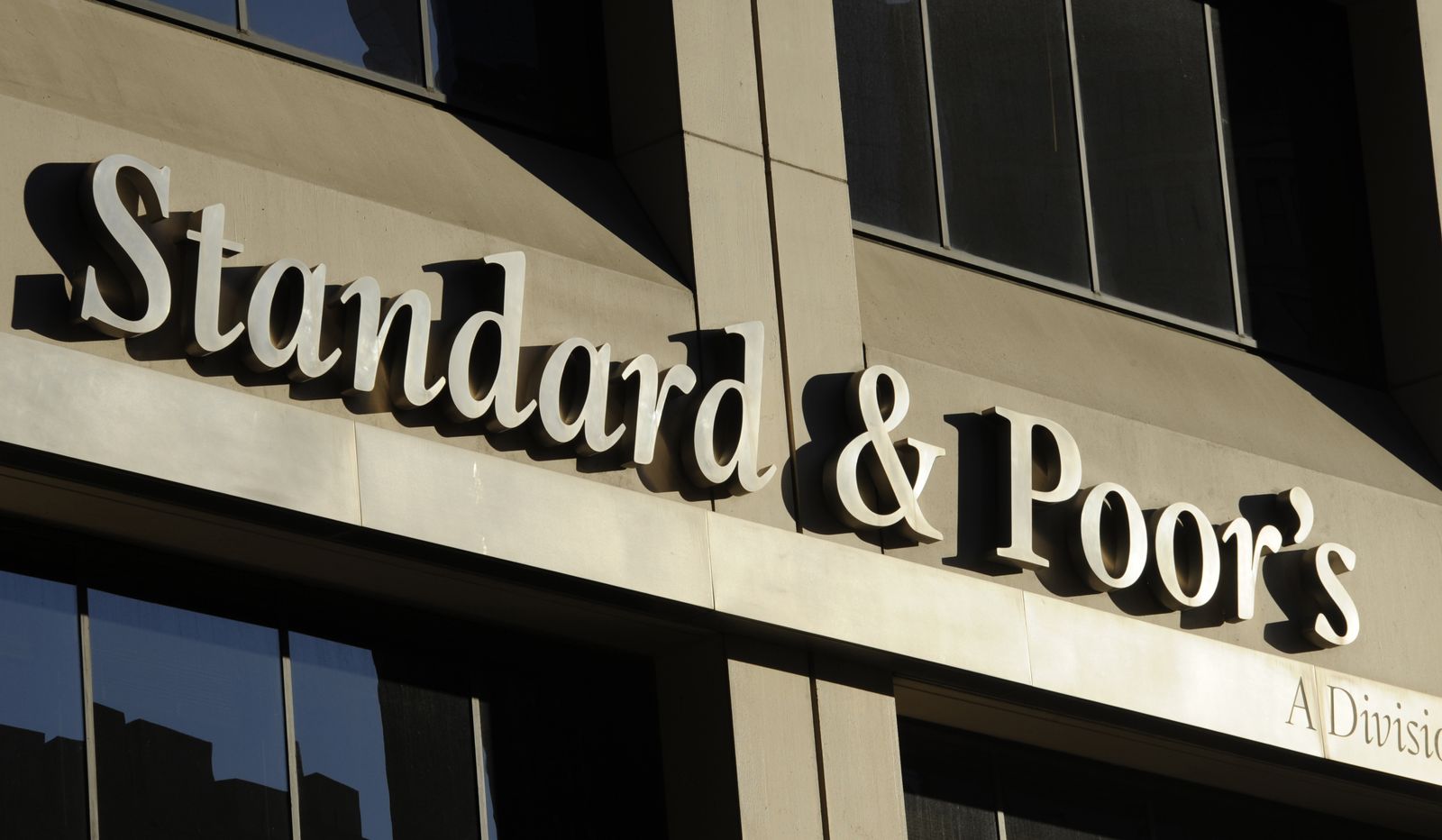