To many it seemed the week when France's Socialist Party (PS) finally pushed the self-destruct button. Two very different women were locked in a bitter battle not just for the party's leadership, but for its soul. The result was the worst possible outcome -- a razor-thin victory for left-winger Martine Aubry that leaves her opponent Segolene Royal down but not out. 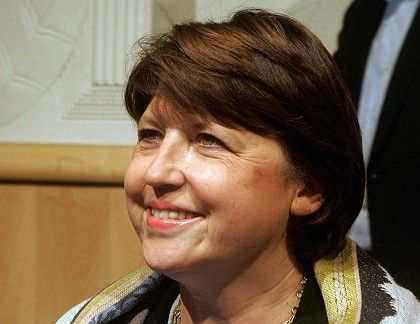 The two candidates faced each other in the final round for the PS leadership on Friday. On Saturday the initial returns indicated that Aubry, the former social affairs minister responsible for the controversial 35-hour work week, had won by just 42 votes. Royal's camp cried foul, claiming ballot rigging and irregularities. Yet a committee called to verify the result announced on Tuesday that Aubry had actually won by 102 votes -- out of the total of 134,800 cast.

At first Royal's supporters called for a re-vote and even threatened legal action. However, Royal, who was defeated by Nicolas Sarkozy in the 2007 presidential election, eventually conceded defeat.

Now Aubry, the daughter of former European Commission President Jacques Delors, faces the unenviable task of trying to unite the deeply divided party. It remains to be seen whether she will go on to challenge President Sarkozy in the next presidential election, scheduled for 2012. A survey published by pollsters BVA on Tuesday showed that while most left-wingers thought Aubry's election to the party leadership was a good thing, only 20 percent wanted her to be the party's presidential candidate. Thirty percent, in contrast, backed Royal.

It's clear that Royal doesnt seem ready to take a back seat just yet. She released a video message early on Wednesday calling on her supporters to continue the Socialist Party's transformation. "It is not exactly a declaration of a candidacy," in 2012, remarked Le Figaro newspaper on its Web site, "but it looks like one."

Meanwhile, German editorialists regard the acrimony of the past week as evidence that the Socialist Party is a spent force, and name a clear winner of the party's civil war: President Nicolas Sarkozy.

"The conflict was ostensibly about the party's political direction. Whether the party wants to form a coalition with Francois Bayrou's centrist Modem party ahead of the campaign for the 2012 presidential elections didnt really interest anyone. Aubry thinks this is the wrong direction, Royal supports opening up to the center. The question of whether the PS should be a modern and youth-based mass organization (Royal) or a strictly traditional party that is close to the trade unions and appeals to its base of workers and employees (Aubry) was also only a minor issue in the conflict." 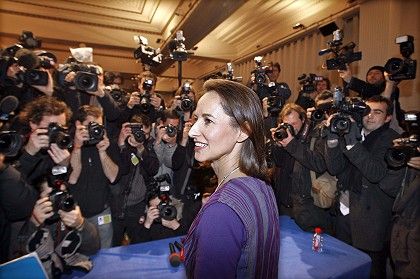 Segolene Royal is not about to fade into the background.

"Fundamentally the fight was about who would be a candidate in 2012. Any PS candidate has a chance against the conservative Nicolas Sarkozy only with the backing of the party apparatus -- Royal already experienced this in 2007 Without the help of the powerful regional associations a Socialist would have little chance from the outset against (Sarkozy's) political machine."

"Now the PS officially has a leader again. However, the party remains divided and is diminished in the eyes of the public and its members. Aubry may have won but Royal still exudes polish and glamor."

"The chances of this forlorn bunch being in a situation to pose a problem for Nicolas Sarkozy -- never mind producing a challenger with any prospects -- have to be zero after the past weekend."

"A party whose leading members threaten each other with lawsuits when their candidate is not declared winner of the leadership contest is not a party that will be supported by the voters. The French Socialists have neither a demonstrable program nor a convincing and charismatic candidate. The party has a few mediocre years behind it and no future ahead. There are winners in the crisis. One is Nicolas Sarkozy, who can now act unchallenged. The other is a young man by the name of Olivier Besancenot, from the extreme left, who wants to found a new anti-capitalist party to which stray Socialist voters can flock."

"The fact that the gap between the two camps (in the vote) was wafer thin  and the protagonists are obviously incapable of reconciliation, means that the only consequence can be a split. The party that even in good times always had to look for alliances is now likely to divide into two irrelevant halves. This kind of suicide can no longer be ruled out."

"It is hard to see how the French Socialists can revive from a situation in which one half of the membership is opposed to the other half  Perhaps the duel between Aubry and Royal can be defused by creating a 'collective leadership.' Such a solution would suit the left wing of the party and could neutralize the poisonous personal animosity. The essence of the conflict, though, is about what the party is and where it wants to go. The span of Socialists ranges from Trotskyites and old Marxists to Social Democrats in the mold of Blair and Schröder. The leading personalities float like corks in these streams and use them to forward their ambitions. One of them dreams of a Popular Front, the other of an opening to the center. Neither wants to forgo the campaign machine. However, without a clear decision on the party's direction, this machine will no longer function."