France has become the latest European Union country to dig into its pocket to try to halt the economic slide. President Nicolas Sarkozy's €26 billion economic lifeline hopes to encourage recovery by funding investment projects rather than direct boosts for consumers. 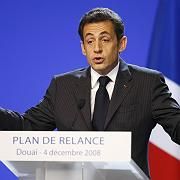 French President Nicolas Sarkozy outlines his economic stimulus plan: "Our answer to the crisis is investment."

And while the French economy is predicted to veer into recession, the government says that the new package will expand gross domestic product by 0.6 percentage points in 2009.

Speaking in Douai, Northern France, near a Renault factory, Sarkozy said almost €3 billion will be injected into the all-important automobile and housing sectors. The construction industry will be helped by a €6.5 billion investment plan to upgrade railways, schools and hospitals. Meanwhile, infrastructure projects will be accelerated, investment will be encouraged and small firms will be rewarded for new hiring: "Our answer to the crisis is investment," he told journalists.

The French scheme follows announcements of bail-out plans by its European neighbours -- but the tactics differ. While Sarkozy plans to spend, spend, spend, Britain will focus on slashing consumer taxes and Germany is prioritising

guaranteeing loans and stabilizing the banking sector. But German commentators said the package was no panacea for France's enduring problems -- not least its hefty debt pile accrued over decades.

"French president Nicolas Sarkozy presents himself in the unfortunate tradition of predecessors like Francois Mitterrand and Jacques Chirac: we'll spend today and deal with the debt mountain tomorrow when times are better"

"France has been living beyond its means for more than 30 years. Unlike in Germany, successive governments have avoided hard measures like raising taxes for restructuring. So now France doesn't have the same leeway for an economic stimulus package."

"The new program doesn't change anything about France's chronic competitive weakness: Too little investment in research and development led to a weakness in exports by French companies. Politically, Sarkozy has no choice but to match Britain, Spain and Italy. But what will happen should the program not have the desired effect? In that case, France would be left sitting on huge debts. History teaches that well-ordered finances are important -- even in good times. Why should it be any different this time round?"

"It is a paradox of the current European predicament that it is a continental problem -- but answers are provided nationally. The current crisis could be an ideal opportunity to develop common European economic politics -- along the lines which Sarkozy now proposes for France: big European infrastructural measures could include, for example, high-speed links between Paris and Berlin and Berlin and Warsaw or the construction of more flats and other job-intensive investment schemes. That would not only serve to boost a continent in crisis but would also, at the same time strengthen the European identity and sense of belonging."

"Instead, every country is homing in on local concerns and the crisis increases the competition between individual European countries. An economic programme like Sarkozy's stands for the re-nationalization of politics. The fact that Sarkozy, national president -- and at the same time the current European president -- ended his speech with 'vive la France' without 'vive l'Europe' is symptomatic."

"The president knows how to embellish (the details). His big talent lies in his ability to make himself and his measures appear bigger than they really are. He is an engaging speaker who is particularly arresting for people who hear his rhetorical phrases for the first time. That and his effervescent temperament separates Sarkozy from Angela Merkel. Because of the strong power base he enjoys in the French political system, he can also take a stronger position than the German chancellor. His party's big majority in parliament helps him as does the dominance of the loyal media."

"Additionally, Sarkozy will only face elections in 2012, the European elections in 2009 will probably hardly affect him; the French opposition is weak and, thus far, there has been no big public debate on how to deal with the crisis."

"But to believe that Sarkozy therefore, has a free hand, would be a mistake. That is demonstrated by the bewildering mish-mash of measures he has adopted. Because of France's high budget deficit, its room to manoeuvre is extremely limited. This also separates France from Germany -- and explains why he has to restrict himself to talking rather than acting.

Sarkozy knows that because of the high budget deficit, Frances recovery after the crisis is likely to be slower than that of Germany. Any additional debt burden will only serve to postpone the upturn."