When Michael Martin steps down in June he will become the first Speaker of the British House of Commons to be forced out of his job in three centuries. He is the highest-profile casualty so far of a political expenses scandal that has rocked Britain. 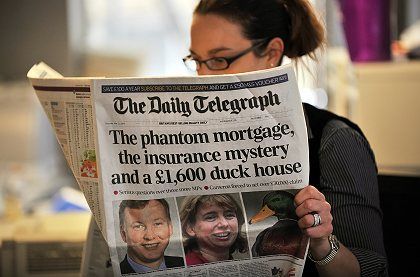 Martin, whose job as speaker is to keep order in parliamentary debates, on Tuesday announced that he will be standing down in June. His terse statement came amid a snowballing scandal about the dubious expenses claimed by some members of parliament. Over the past two weeks the Daily Telegraph newspaper has revealed how some politicians have abused their expense allowances, billing the state for mortgage repayments, a black glittery toilet seat or the cost of cleaning the moat of a country home.

Martin's decision follows a no-confidence motion against him and angry outbursts from his political colleagues. He has been held to account over the row as Chair of the House of Commons Commission, which oversees the rules governing members of parliament. Last year he also came under fire for his claims of some £4,280 ($6,640) for his wife's taxi fares and around £17,500 pounds ($27,140) to help finance his second home in Scotland.

The recent stream of revelations -- which include bills to the tax payer for the cost of horse manure and pornographic films -- has fuelled public anger at a time when Britons are feeling the pinch of the worst recession in decades. Thursday's Daily Telegraph sparked fresh outrage and an opposition lawmaker was forced to quit after claiming £1,600 pounds ($2,500) for a "duck island."

Now a number of MPs face an uncertain future. A national election has to be held before June next year and several MPs have said they will stand down at the next ballot. Others are likely to be voted out. The crisis has boosted dissatisfaction with the already struggling Prime Minister Gordon Brown. The opposition Conservative Party has called for an early general election --something that has thus far been resisted by 10 Downing Street. The police, meanwhile, have said they may investigate some of the more extravagant claims.

Public anger is expected to reduce turnout at forthcoming European and local elections, while recent polls signalled an up swell of support for smaller or fringe parties.

One Conservative Party lawmaker on Friday described recent events as a "McCarthy-style witch-hunt" that risks driving politicians to suicide. "The atmosphere in Westminster is unbearable," Nadine Dorries wrote in her blog.

But German observers, on the other hand, were left in little doubt about the necessity of a more transparent political system -- although they were divided about what should happen next.

"Great Britain was always different to other countries, a fact it continues to celebrate with pride and zeal. The House of Commons is a microcosm of this idiosyncrasy. Politicians do not sit in an amphitheatre but rather, in a Medieval-style assembly, facing each other. In front of the benches -- they do not have the luxury of their own chair -- there is a red line which no speaker is allowed to cross. The mark is placed at the length of two swords, and is designed to protect any bloody duels from taking place."

"Amid such quirks and curiosities a unique culture has developed -- something between Hogwarts, complete with riotous pupils, and an old gentlemen's club with its archaic traditions. But the core problem remains voters' feelings of alienation from their representatives, something which is not solely a British problem."

"So one should think twice before pointing an accusatory finger at Britain. There is also the fact that the House of Commons -- in comparison with the European Parliament -- is in a better position than others to pull itself out of these problems, not least given its history, its self-confidence and its peculiarities".

"The famous nickname, the mother of parliaments, these days sounds like a jibe. But Britain's political class has the chance to clean up its act and purge the system of errors. On condition, however, that in this process of reform, Britain retains its originality, which is its strength."

"The crisis would be easier to bear if it weren't combined with the decline of the Labour government and the worst economic crisis seen in decades."

"The country now needs a strong government to tackle this bundle of problems as well as political reform. But it doesn't have one. Prime Minister Gordon Brown may have earned international plaudits for his leading role in tackling the financial crisis -- but at home, support has run dry."

"The New Labour project has come to an end Rather than finding a new economic direction, what Britain needs is a new political direction. That will be the task of the recently strengthened Conservative Party, which recent polls show is enjoying twice the support of Labour. People have been lured by the youthful David Cameron but, as yet, it is there is not a clear enough alternative on offer. The party has spent a long time escaping from the long shadow of Margaret Thatcher. But, amid such big challenges and the approaching general elections, Cameron is starting to define himself."

"He is using the scandal to demonstrate his drive. He is also separating himself from any rule breakers. The scandal offers him the chance to make a break from veteran back benchers and to rejuvenate his party."

"There is still no election date in sight. Brown could draw the uncertainty out for another year, even if the European elections prove to be the expected disaster. The problem is the state's finances, which in the meantime, look set to spin out of control. Brown will also not be in a position to carry out needed parliamentary reform. Britons will need to have yet more patience."

"It is no mere coincidence that the expenses scandal coincides with the apparent disintegration of New Labour. The British electoral system produces clear majorities and strong governments, but not strong parliaments. Unwritten tradition gives the parliament little autonomy from the government. It has no right to decide the daily order of business, nor the legislative procedure. Labour took advantage of this: Tony Blair often degraded the House of Commons to the government's little helper."

"British political disillusionment was long evident in the low voter turnout in elections. But now apathy has turned into anger. Rage towards politicians, like the one who ordered 28 tonnes of manure for his garden is the same as the rage towards the banker who ruined Great Britain's biggest bank and then took home £1 million in retirement payouts. But now comes the bill for the manure: People are calling for transparency. Voters have lost their trust in an increasingly complacent elite -- and want more accountability. That is at the core of this revolution".

"What Great Britian is currently going through has less to do with the relatively small sums of money. It is more a symptom for the increasing inability of the political class, not only in London, to deal with the realities of a globalized world, to deal with the public on an equal footing and to master the challenges of a uniquely complex economic crisis."

"One doesn't trust someone who fudges their expenses and spends months trying to prevent more transparency to save crisis-ridden banks, never mind to reform the economy or to represent the interests of the voters."

"This crisis of confidence in parliamentary democracy is not confined to Great Britian. From Greece to Lithuania to Iceland, over the past six months European countries have experienced severe shocks and a loss of faith in the competence of their governments."