On Tuesday, Serbian Prime Minister Boris Tadic handed in his nation's application for European Union membership. "It reflects the Serbian government's strong determination and the broad popular support for EU membership," Swedish Prime Minister Fredrik Reinfeldt said during the handing-in ceremony. "A Serbian membership is important not just for Serbia, but for the region as a whole." Sweden accepted the candidacy because it currently holds the rotating EU presidency. "This is an important addition to the EU family," Reinfeldt said.

Serbia joins a waiting list for membership in the 27-nation block that also includes Croatia, Turkey, Macedonia and Iceland. Bosnia and Kosovo have also expressed a desire to join the EU.

Serbia is likely to have a long road ahead of it before it can become a member state. Recent events, however, do appear to have brought the country further down that path.

Many Road Blocks For Serbia Before EU Membership

Positive shifts in the diplomatic mood do seem to be bringing Serbia and the EU closer. The ratification of a Stabilization and Association Agreement (the SAA) -- a commitment to political, economic, trade, or human rights reform that the EU typically demands of its potential member states -- was held up due to protests from the Netherlands over Serbia's inaction on war criminals. But recently, after a top United Nations prosecutor said Serbia was cooperating with the UN war crimes court, the Netherlands lifted its opposition and ratification of the SAA seems to be coming closer. Additionally the EU has lifted visa requirements for Serbians which had been in effect for the past 20 years. The EU has also become Serbia's main trading partner.

Still, there are many road blocks still standing in the way of Serbian membership. One of the major, and most glaring, hurdles remains the continued Serbian inability, or perhaps unwillingness, to bring alleged war criminal Ratko Mladic to justice. The Netherlands wants Mladic extradited to the Hague tribunal on war crimes. In 2008, the Dutch blocked the implementation of the SAA agreement over the issue. While surveys indicate that the majority of Serbs would like to join the EU, they also show that most Serbs consider Mladic a national hero. Questioned about the issue of suspected war criminals in his country in Stockholm this week, Tadic told journalists: "We are doing everything that is possible to arrest them. If they are on Serbian soil they will be captured."

Another problem is the difference of opinion between the EU and Serbia over the independence of neighboring Balkan state Kosovo. The United Nations, which administered Kosovo following the war in 1999, remains divided over whether to legally recognize the Republic of Kosovo and Belgrade has steadfastly refused to affirm the independence of the renegade region. And although most EU countries have recognized Kosvo, five member states do not. The only state that has emerged out of the former Yugoslavia to have been welcomed into the EU so far is Slovenia, and analysts suggest it could take anywhere from four to 10 years for Serbia to attain its membership.

German commentators writing about Serbia's EU membership bid this week are skeptical -- there are still many issues that must be addressed before Belgrade could be legitimately, and whole heartedly, accepted into the European bloc. Legacy issues pertaining to the Balkan wars and the hunt for suspected war criminals linger. Some fear membership for Serbia is ill justified and could further weaken the EU's geopolitical standing.

"The EU should think carefully about what they are letting themselves in for. Whether Serbia has fulfilled the requirements for membership is questionable -- not only formally but also substantively. A symbol of the flawed nature of the Serbian constitution are the lame attempts -- or perhaps it is an unwillingness -- to capture Mladic and bring him before the war crimes tribunal in the Hague."

"And in this case it is not really about the person, it is about the impression. Obviously a large portion of the people, as well as important politicians and interested parties (such as the military) still consider Mladic to be a Serbian hero. The nationalistic furor that turned the whole region into a war zone has not yet been defeated. Nor has this country's 'dark past' been worked through. Even today, Belgrade has not managed to push through an apology for war massacres. In order to become a member of the EU, it is absolutely imperative that a nation turn away from this kind of hypernationalism. And the question of Kosovo, which has the potential to seriously burden the relationship between Serbia and the EU, also belongs to this discussion."

"Problems like this are not easily solved within the EU. The example of Cyprus shows us this. So maybe the EU should save itself from importing yet another human rights issue."

"And finally there is yet another issue to consider: The EU's actual ability to take on more members. It is generally understood that the EU might need longer to consolidate, and that goes for both widening the EU's reach as well as deepening its structures. At the end of the day it depends on whether the EU wants to be more than just a zone of stable lands and become an effective political force in its own right."

"Serbia has applied for EU membership. Excuse me? Serbia? And it has applied for membership with the support of the Swedes, who currently hold the EU presidency, as well as the Spanish who will hold the presidency in 2010. Yet even those citizens inclined toward expansion of the EU may be feeling mistrustful. Croatia, Albania, Macedonia, Turkey -- and now the country whose regime is actually responsible for the Balkan wars. Not to mention the fact that Mladic is still at large --and this is despite the fact that his being brought to justice was always a precondition of any EU membership negotiations for Serbia."

"Under the EU's protective umbrella, it is possible for economic mismanagement and corruption to flourish unhindered. Because once you're in the club, Brussels cannot hold anything against you. The opposite is true: Richer members may well have to come to the aid of their smaller brothers, when the smaller brothers are in need."

"Brussels knows about the problems of widening EU membership. They knew about it back in 2007. Then, on the occasion of the entry of Romania and Bulgaria into the EU, protective clauses were written into the legislation -- even though these have never actually been applied. So does anyone think that these measures make any difference to those officials in corrupt administrations?"

"If the so-called 'transformation nations' are not to become a burden on the EU, then Brussels must work out some sort way of keeping them in check. In the future, the EU may even have to be prepared to interfere in a sovereign state's affairs -- if only to safeguard the EU's legitimacy and protect the group from ruin."

"Encouraged by the Swedish presidency, Serbia has handed in its application for EU membership. And this is despite the fact that the country has leapfrogged several formal, and up until now standard, steps toward membership."

"Before they became members of the EU, most nations first became members of the NATO military alliance. But because of air attacks on its country by NATO in 1999 Serbia, has forgone this step. Neither has the EU ratified the Stabilization and Association Agreement, because Serbia has not done enough to work together with the UN tribunal for war crimes. That ratification is something that normally happens before a country proposes its candidacy."

"Tadic's fancy marketing team wants to show that Serbia is getting preferential treatment from their 'European friends.' And with this they want to silence nationalistic, anti-EU opponents. Brussels is playing along because Serbia's internal security is vital to the security of that whole unstable region."

"So why are Tadic and his beleaguered coalition government playing all their best cards right now? It looks as though Tadic and his party are thinking that success with the EU can help them stay in power -- before their demoralized country people get a real taste of the recession in 2010 and before the ever-stronger nationalist-populist powers get the upper hand. Promising the blue European sky and hoping for the best: That's the recipe that brought Tadic to power and it is one that has kept him there. At least for the time being." 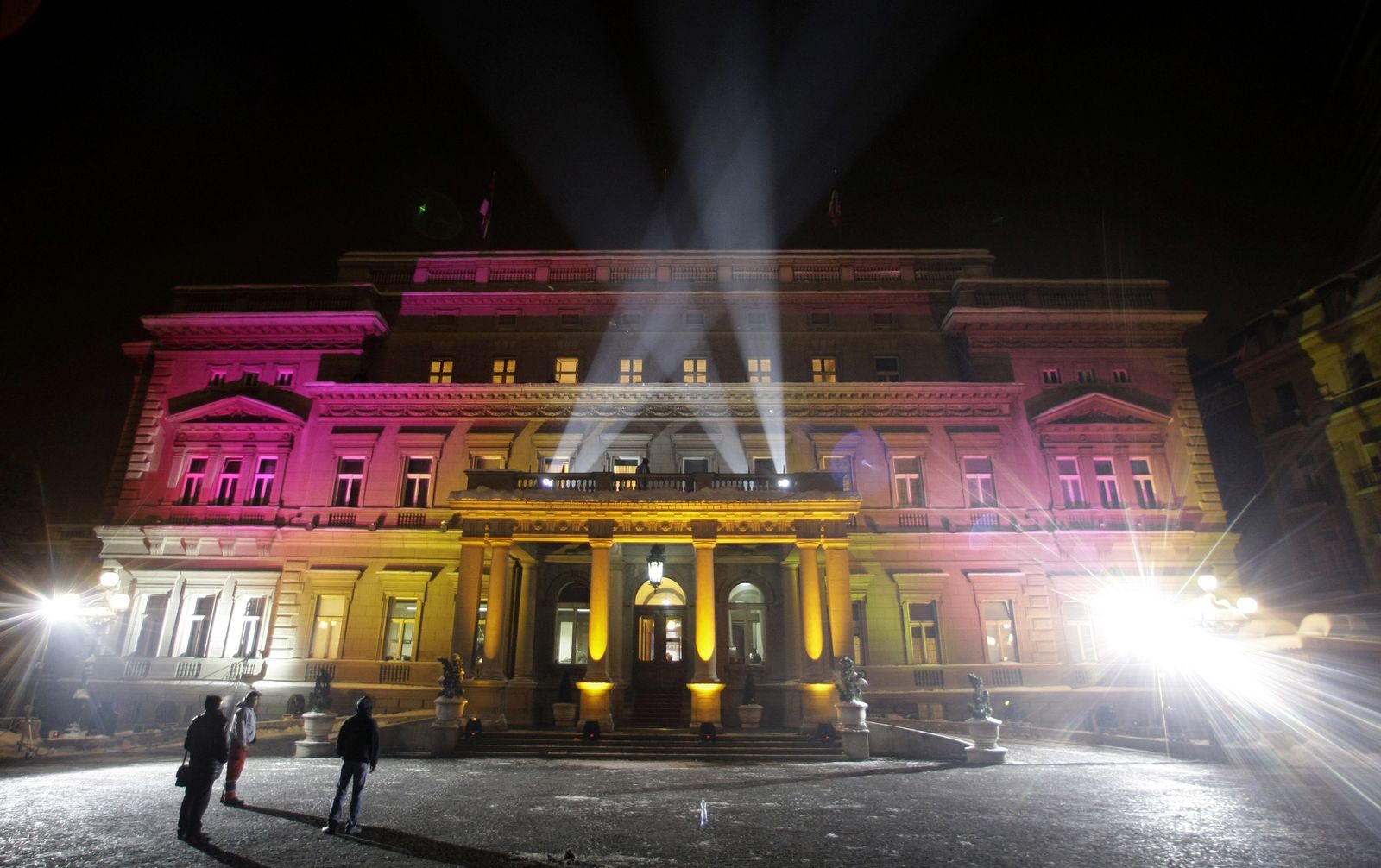