Right now, politicians across Europe are doing everything in their power to explain just how different their home economies are from Greece, but investors don't always believe them. Instead, jittery markets have focused on Standard & Poor's one-notch downgrade of Spain to an "AA" rating on Wednesday, a day after the agency had lowered Greece's government debt to "junk" status and Portugal's to "A-".

The power that the rating agencies exercise over notoriously volatile markets has caused deep consternation in Europe. German Foreign Minister Guido Westerwelle called for the creation of a European rating agency, stressing that the Greek financial crisis threatened to spread across the EU "like the ebola virus." Westerwelle told the Westdeutsche Allgemeine Zeitung newspaper that the European Union "should counter the work of rating agencies with efforts of its own."

Peter Bofinger, a prominent economic adviser to the German government, has also spoken out against Standard & Poor's decision to reduce its ratings for Greece and Portugal.

With the markets piling on the pressure for clarity on the Greek rescue plan, euro zone governments, especially Germany's, have been under fire for moving too slowly and allowing uncertainty to spread across the monetary bloc.

German Chancellor Angela Merkel said on Wednesday that she would step up efforts to respond to the Greek crisis. Meanwhile, the International Monetary Fund confirmed that the unprecedented bailout may cost billions more than initial estimates.

In German newspapers on Thursday, most editorialists hone in on the issue of the critical role rating agencies are playing in the current crisis.

"In the case of the euro crisis, the agencies can hardly be blamed. If economists now criticize Standard & Poor's for lowering the credit rating of Portugal, even though its macroeconomic data are not so bad, they do not understand the agencies' role. Agencies are there to show investors the probability of default on government bonds -- therefore, they cannot look at economic fundamentals alone. Instead, they have to react to events on the markets. If the yield on Portuguese or Greek government bonds increases dramatically, thus translating into higher financing costs and a greater risk of default, then this cannot be overlooked by the agencies. If they didn't respond to that, they could be rightly accused of failure."

"The problem is not that the agencies follow the market trends, but that their opinion often has a pro-cyclical effect, meaning the panic among investors is strengthened. It is not S&P, Moody's or Fitch who are at fault, but rather investors and central banks, who often follow the agencies too blindly. After the subprime failure at the very latest, people should be more skeptical. But instead of relying more on their own expertise, both the European Central Bank and big investors are still overly reliant on outside opinion -- it is high time for that to change."

"Despite their poor ratings, there is no doubt that the euro countries will rescue Athens from bankruptcy: For the currency, an insolvency would be much more dramatic and more costly than a short-term intervention. So Standard & Poor's is acting against its better knowledge."

"The profit-orientated credit analysts have never been an independent arbiter of the financial markets, even if they appear to direct them. The three dominant credit rating agencies were finally discredited when it turned out that they had been giving toxic securities the top AAA rating for years, thus triggering the financial crisis. To date, there is no indication that they can analyze the solvency of debtors any better."

"Therefore, the geopolitical dimension should not be underestimated: From the beginning, the United States bitterly opposed creation of the European common currency, which competes with the dollar's role as a global reserve currency. An escalation of the euro crisis is in its interest. It would be politically naive to believe that US rating agencies, that have a market share of 80 percent, remain neutral in this power struggle. Instead of dithering, the euro-zone countries must immediately help Greece and send the financial markets a clear message that speculative attacks will have no chance against largest single currency zone in the world."

"Anyone who believes that the Greek crisis is a monetary or technical financial problem is underestimating the situation -- and risks falling into an abyss. It's not just about a country that cheated its way into the economic and monetary union (something everyone knew), and is now unable to survive it. The risk of a market-driven chain reaction, hitting Portugal, Spain, Italy and Ireland in a way that might truly threaten the stability of the euro, is not the greatest danger on the horizon. Ultimately this is about the whole European project, of which the euro zone is an important foundation."

"The Greek crisis is a merciless display of what the EU has undertaken in recent decades. Deepening the EU while also expanding it does not work when the differences between the members are widening, including cultural alienation. The result is that the commitment to an 'ever closer union', or yet greater homogenization, is increasingly seen as an imposition from outside. When the current difficulties are finally solved -- one way or another -- Europe needs to sit back and reflect on its future, looking at what it should become, and asking the question of what it is capable of becoming."

"Let the Greeks solve their own problems, they shouldn't get our money. This seems to be how most Germans think. This is what the initial polls suggest, and the politicians suspected it before. Just this weekend, German Finance Minister Wolfgang Schäuble called the aid into question, Chancellor Angela Merkel played for time and Foreign Minister Guido Westerwelle went on the attack at a party congress. And this despite the fact all three had approved aid measures at EU level a long time ago."

"Behind this zigzag course lies the fear that the tabloids could take control of the issue. The barrage from (the mass-circulation) Bild (newspaper) has already begun. Conservative papers at the very least are toying with the idea of making the Greeks think about exiting the euro."

"If Greece becomes insolvent, then it will not only hurt the German banks who have some €45 billion ($60 billion), and possibly more, in Greece. It could also spark a chain reaction which begins with chaos in Greece and then spreads to Portugal and Spain -- and ending up shattering the whole monetary union."

"Germany, especially, cannot afford for that to happen. Politically, because the decades it took to build up the bloc would be lost. Economically, because resource-poor and export-strong Germany is dependent on open markets, international rules and the monetary union. The German economy could not withstand a new era of the nation-state. Conversely, Germany could even make money from Greece's salvation if all goes well -- after all, the money is being loaned at a good interest rate, not given away." 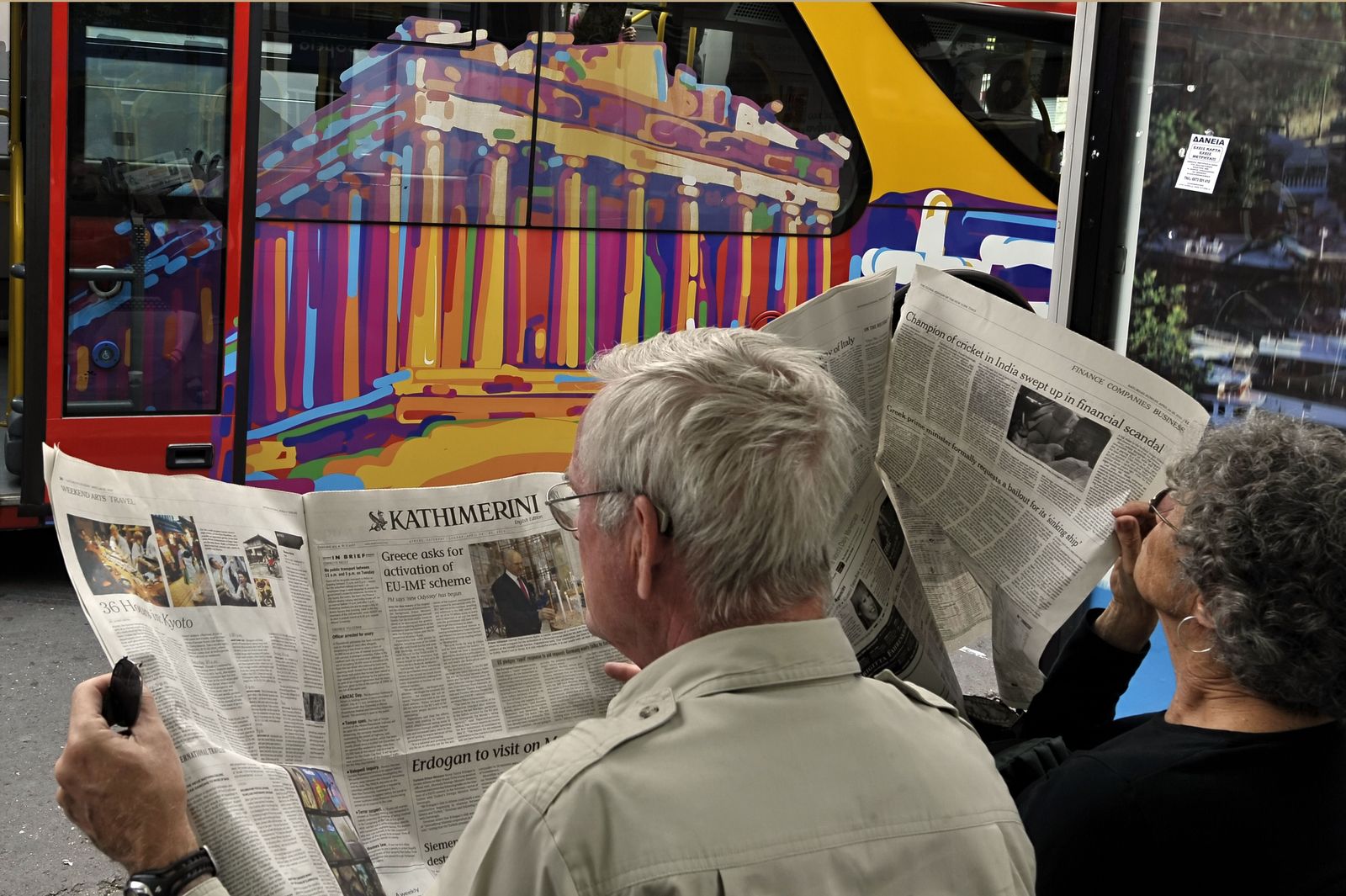 Foreigners read newspapers in Athens: Germany's foreign minister has warned that the Greek financial crisis threatens to spread across the EU "like the ebola virus."