The future of the European common currency, as has become abundantly clear this week, is far from certain. Chancellor Angela Merkel's government is struggling to find a majority within her government coalition for a crucial vote on reforms to the euro backstop. Italy has been hesitant in confronting massive state debt. Greek reforms have come more slowly than promised. And investors are nervous.

Despite the uncertainty, however, Switzerland on Tuesday pegged its currency to the euro, announcing that the exchange rate was not to fall below 1.20 Swiss francs per euro. "The current massive overvaluation of the Swiss franc poses an acute threat to the Swiss economy and carries the risk of a deflationary development," the Swiss National Bank said in an announcement. The bank said it was "prepared to buy foreign currency in unlimited quantities" in order to maintain a cheaper franc.

The country had little choice. The massive increase in the value of the franc this year -- its value relative to the euro had increased by 20 percent since January -- had begun to slow the economy. In the second quarter of this year, the Swiss economy, heavily reliant as it is on exports, grew by a mere 0.4 percent. The franc's rise in value is a direct result of loss of confidence in the euro and the dollar in recent months.

The move ended 30 years of a free-floating Swiss franc and comes at a time when the euro is facing its biggest existential challenge to date, as doubts about state debt and bank health in the euro zone continue to unsettle investors.

There was some good news on Tuesday, with Italian Prime Minister Silvio Berlusconi agreeing to stiffen up an austerity package that he had hollowed out just days before. The plan once again includes an increase to the VAT tax and higher taxes for the country's top earners. And European stock markets recovered slightly in early trading on Wednesday as a result.

But foot-dragging on reforms in Athens has renewed concerns that Greece may ultimately be forced into insolvency despite the vast aid packages it has received. Indeed, German Finance Minister Wolfgang Schäuble on Tuesday warned Athens, saying that there was no alternative to implementing the tough belt-tightening measures the country has promised. Horst Seehofer, the governor of Bavaria and a key Merkel ally, refused to rule out a Greek withdrawal from the euro zone in an interview with the German tabloid Bild.

In a speech before the German parliament on Wednesday, Merkel sought to calm nerves, saying that "we don't see any signs of an approaching recession" and emphasized that "Germany is once again the growth engine of the EU."

German commentators, on Wednesday, were still processing the Swiss decision to connect its fiscal fate to the euro zone.

"Even if it might be expensive in the end, the Swiss decision will ultimately be cheaper than having an economy that is no longer competitive. It should be a lesson to all those who shout 'Get Rid of the Euro' and 'Give Us Back the deutsche mark.' Were we to get the mark back, it would appreciate at least as rapidly as the franc has and German exports would suffer. It is, after all, a mistake to believe that a country only has to balance its budget in order to guarantee growth and prosperity, to avoid crisis and to make its citizens happy."

"Switzerland has its own currency, a diminutive budget deficit and a legally mandated balanced budget (debt brake) -- and still it found itself being chewed up by the market machinery. In a world of globalized finances, there are no islands of bliss. This network creates a dynamic that solitary actors like Switzerland cannot escape. And Germany certainly couldn't either."

"The high demand for the franc will, in the future, be met with an even higher supply: In other words, money will be printed until the desired exchange rate is achieved. That may sound as though it will increase the risk of inflation, but it is still the correct step to take and vital for the Swiss economy. A domestic currency that is too strong poses an existential threat to the tourism industry and to Swiss exports. Imported goods like raw materials and machines will become cheaper, to be sure, but adding value and selling them abroad is no longer worth it. In addition, the Swiss have reacted by doing their shopping abroad, resulting in absurd price cuts in the domestic retail industry. In August, prices sank by 0.3 percent -- the risk of deflation is currently higher than that of inflation."

"The move taken by the Swiss National Bank shows us ... that a networked economic system cannot stand up to large discrepancies for long. All euro-critics should take note. Were Germany to reintroduce the deutsche mark, the exchange rate would rocket upwards much quicker than the franc did. Company bankruptcies and mass unemployment would be the result -- the economy would collapse. Germany isn't an island either."

"The world is so networked that no country can go against the grain for long. Those adherents to the deutsche mark should think about that fact, because the Swiss were on exactly that path which critics of the euro recommend for Germany -- and the Swiss couldn't stand it for long. A fifth of Swiss companies, it was said, would have faced insolvency if the franc had climbed further. Those who would like to plunge the German export industry ... into a comparative situation must be very courageous. It would be nice if the Swiss decision would inject a bit of cool-headedness into a euro discussion that has become overheated."

"The problem (with the decision to peg the franc to the euro) is that its ultimate success is not, in the end, under the control of the Swiss National Bank. For a long time now, the franc's exchange rate has had little to do with fundamental economic indicators and a lot to do with fear: the fear that the euro zone will not get its debt problems under control. Some investors have even been willing to accept negative interest for Swiss franc investments just so they could own francs."

"But even the Swiss central bank would be powerless against a renewed wave of panic. Should doubt crop up once again as to Italy's solvency -- or even that of France -- the franc exchange rate could no longer be controlled."

"The inclination to see the franc as a safe harbor has been growing for years. That makes it difficult to achieve the exchange rate desired. The Swiss National Bank is not tightly binding the franc to the euro; that would be the end of independent monetary policy. But it has established a minimum value. In its efforts to defend that minimum, the SNB will likely acquire euro reserves that will vastly exceed those piled up in similar interventions in 2009 and 2010. The result will be ... a much greater dependence on the euro. Most of all, though, how will the Swiss central bank ultimately back away from its new policy? The international economic improvements that are necessary for that to happen are far in the future. And how the country will manage to avoid inflation remains a secret. The Swiss will experience the same problems that others have before them: inflation starts gradually, but is extremely persistent." 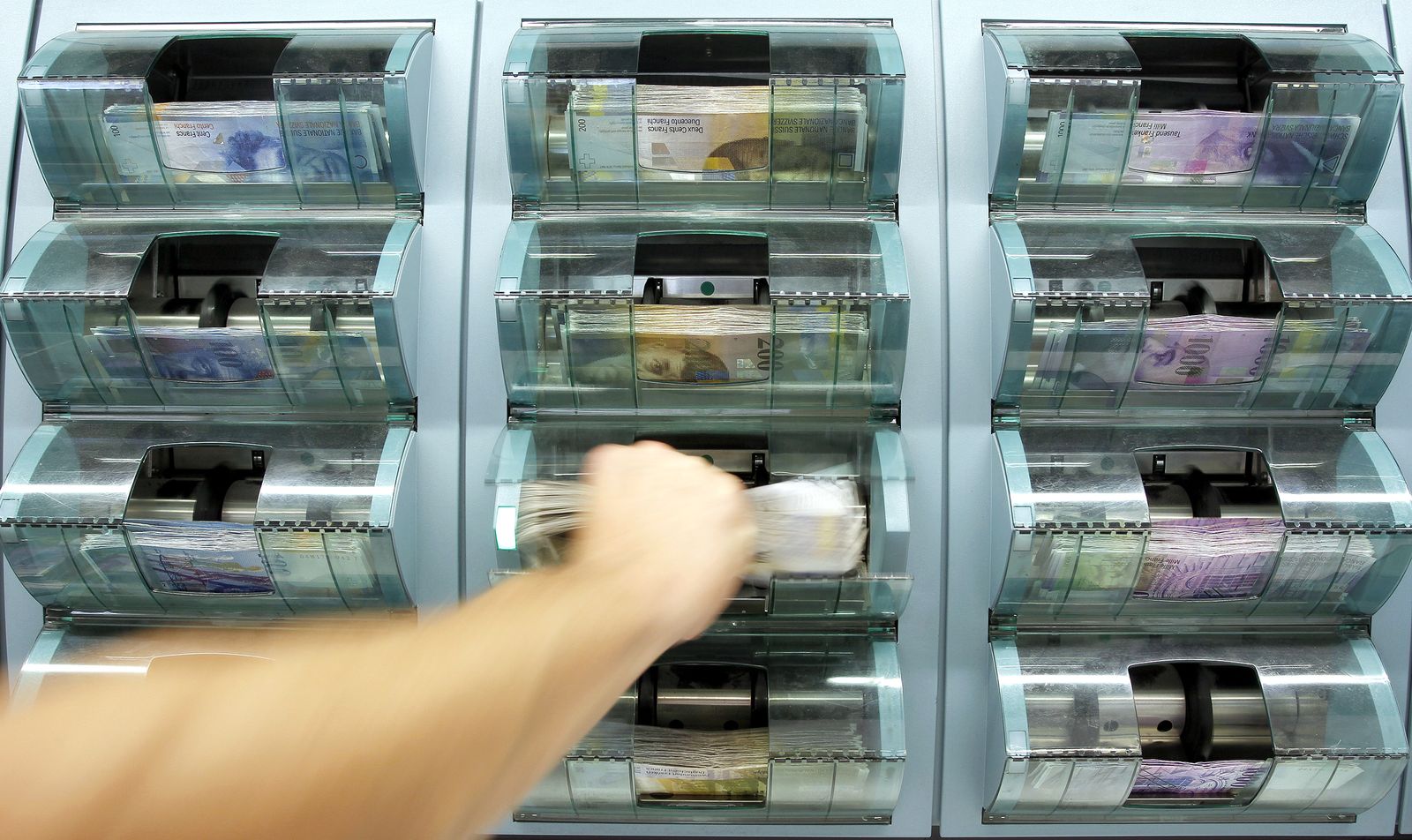 Responding to a massive increase in value, Switzerland moved Tuesday to peg the exchange rate of the franc to the euro.