In an effort to stabilize banks, businesses and governments, the European Central Bank (ECB) opened up a massive offering this week of unlimited low-interest loans. The second such offering in just over two months was snapped up on Wednesday by some 800 banks, which collectively borrowed a reported €529.5 billion ($712.4 billion).

Combined with the first offering from Dec. 21, 2011, this means that the ECB has injected more than €1 trillion into Europe's financial system. The first offering of some €489 billion encouraged banks to purchase government bonds, easing the euro zone's debt crisis and boosting investor confidence.

But it remains uncertain how banks will use the cheap money this time around, though the ECB hopes that the loans with 1 percent interest rates and maturities of three years will prompt banks to lend to small- and medium-sized companies, which would in turn create jobs and improve the economy.

On Thursday, European shares reportedly moved higher in a positive reaction by investors to the ECB's massive credit offering. But, according to Germany daily Frankfurter Allgemeine Zeitung on Thursday, Jens Weidmann, the head of Germany's central bank, wrote a letter warning that more lenient rules on collateral for the loans would put the ECB and central banks at risk.

The first round of cheap loans from the ECB may have calmed the markets and relieved pressure on struggling European nations, such as Spain and Italy, but some analysts have said its latest effort is unlikely to garner the same results.

"Given that there are no further tenders scheduled and the recent ECB rhetoric has been skewed toward this being the last, we believe the market will return to fundamentals and move away from this liquidity euphoria," analysts at Royal Bank of Scotland wrote in a research note.

On Thursday, Germany's commentators are similarly skeptical of the move, with most warning that the risks may outweigh any short-term benefits.

"Government financing may not be the goal of the ECB's money glut. But the side effect of the massive sums that the bank has released for the second time at the unusual lifespan of three years is that interest rates have sunk on the bond markets. Most countries can now finance their debts at tolerable conditions again. That also stabilizes the banks, which is thoroughly pleasing to the central bank. This is because it aims to eliminate every doubt about the financing of solvent banks with the emergency loans. It has achieved this, in addition to hindering an accelerated downward spiral of emergency asset sales."

"But what may have a short-term calming effect can also complicate the recovery of the currency zone through the lowered interest rates on the market. This is because falling risk premiums and cheaper financing conditions could lead some politicians to the erroneous belief that spending policies financed with even more debts is still possible. The ECB must counteract this by creating a timely shortage of money and credit."

"Mario Draghi is a clever politician. Yes, one can call the president of the European Central Bank a politician because he behaves much differently than the classical central bank definition of a currency watchdog. Draghi isn't concentrating on inflation, as this definition requires, but on saving the euro -- the job of the politicians."

"To his credit, Draghi's policies seem to be helping the euro. … However, these successes don't distract from the immense risks of his policies. … Draghi must try to hinder a new financial bubble at all costs. But, as experience shows, that is difficult."

"It will become quite difficult if lots of ECB money wanders into the economy through commercial banks as loans to companies and through other means. This could create the danger of an artificial boom that would drive prices up -- later crippling the economy and devaluing savings accounts. … But the ECB can extract the money from the market again, though this is no simple process. Mario Draghi, who wants to be a politician rather than a normal central banker, is on a dangerous path."

"Nobody can calm the markets better than the ECB. The three-year tender has already shown that. No rescue packet, no austerity package and no crisis summit has as much persuasive power as the money-slingers in Frankfurt. Since the euro boon in December, the situation has calmed noticeably and confidence has returned. This will surely be strengthened by yesterday's long-awaited and generous new round of loans from the ECB."

"It's also clear that the loose policies of the ECB are anything but harmless. After all, it wants the money to be invested, perhaps in government bonds, which would be much to the satisfaction of finance ministers -- perhaps. Alternatively, the money could be invested in other assets, such as mining, real estate or shares. But the confidence inspired by the ECB goes hand in hand with an increased willingness to take risks. That doesn't necessarily amount to an investment bubble, but it could become one. In that case, if the bubble were to burst, we would have to start crisis management over again from scratch."

"The ECB is giving the banks what they want. … The credit institutes are practically getting this massive sum as a gift and will be able to profit from it accordingly. Is it risky? Hardly. The danger of galloping inflation is not slight. Because even when Germany wishes to see it differently, Europe remains deep in the crisis."

"Is the ECB credit useful? Yes. Because if the already shrinking demand from society as a whole also led to bank failures, a new financial crisis would be near. In this regard, the ECB had no other choice than to generously supply the banks. Through this, there is a decrease in some of the intensity of the euro crisis, which isn't actually a (pure) debt crisis but, rather, a general crisis of confidence in the banking system. To boost confidence, the euro zone has pumped (more than €1 trillion) through the ECB and into the financial sector -- a huge sum that is quite necessary. Indeed, as the global financial system is currently set up, everything relies on the flourishing business of banks." 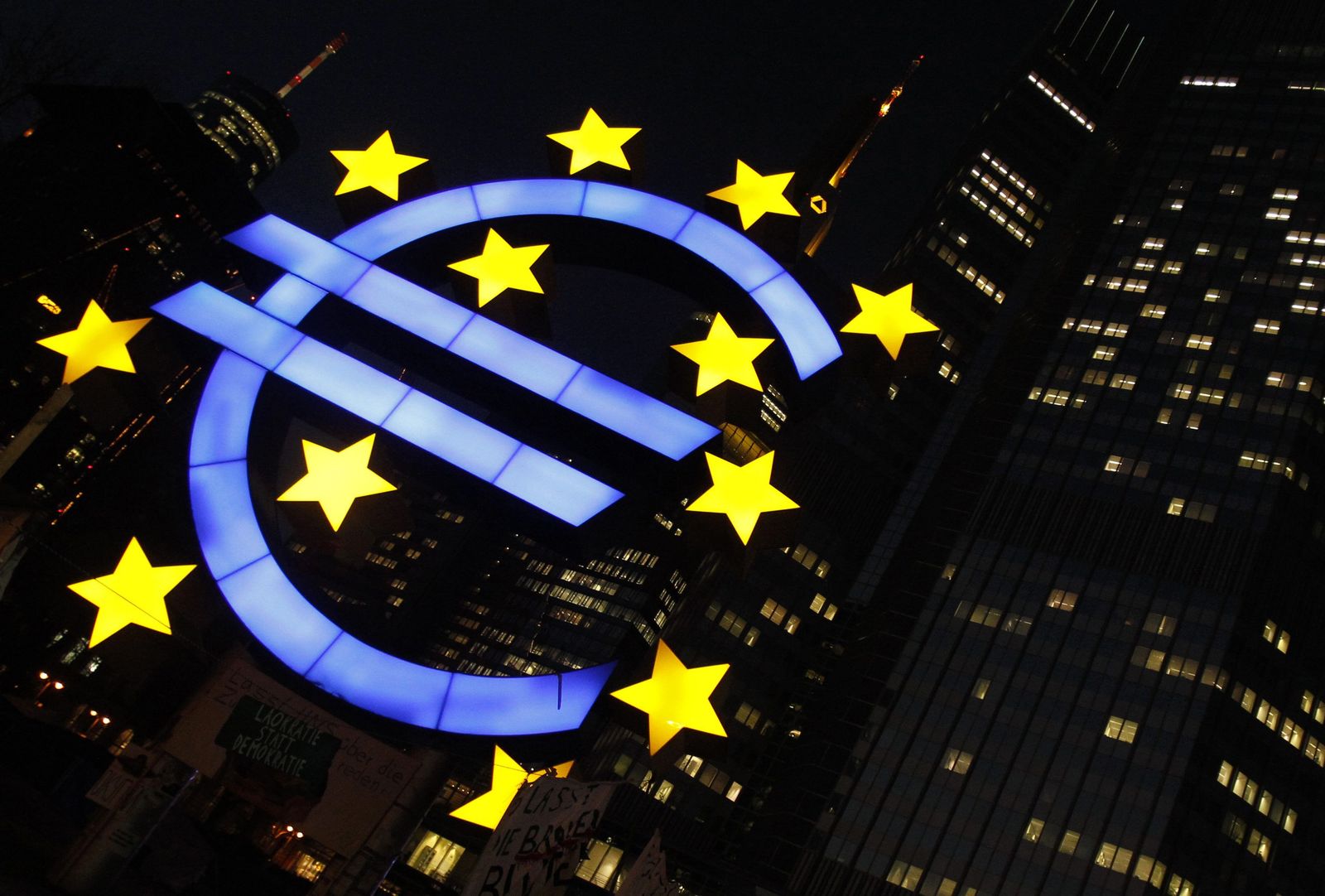 A sculpture of the Euro currency sign at ECB headquarters in Frankfurt.