The initial euphoria that greeted the European Union's "shock and awe" measures to shore up the euro seems to be fading. On Friday, the euro hit a 14 month low against the dollar as investors began to realize that the underlying problems in many European economies are not going away.

The €750 billion ($1 trillion) rescue fund agreed upon by EU finance ministers late on Sunday night had initially eased fears that many euro-zone economies could end up defaulting on their mounting debts. However, the slew of austerity packages in countries with bloated budget deficits is now raising concerns that the severe cuts could actually stall growth and thus make paying off the debts even harder.

The European Union has been struggling to protect the euro, the currency used by 16 of its 27 members. On Thursday German Chancellor Angela Merkel warned that if the euro failed, then Europe and the "idea of European unity" would fail with it. She called on European countries to fight for the stability of the currency, saying governments had promised stability and "we have to keep that promise."

Germany, the biggest EU member state, will also likely have to cutback spending due to its massive share in the rescue deal. Yet that will be tough sell for Merkel, who saw her party hemorrhage support in a key state election on Sunday.

Meanwhile, in an effort to improve fiscal responsibility within the EU, the European Commission on Wednesday outlined plans to toughen up the Stability and Growth Pact, including a peer review of national budgets by other EU finance ministers. The current indebtedness of many European countries breaks the pact's rules, which set a limit for budget deficits within the euro zone.

On Friday, the German papers take a look at the euro zone's woes and many question whether the austerity measures will be enough to restore trust in the currency.

"The panic that the euro may not survive has returned in Europe.  The result: Spain and Portugal announce surprise austerity measures in order to reduce their budget deficits as quickly as possible."

"However, the latest cuts will only reassure the investors and other European governments in the short term. Some euro states are already caught in the debt trap. Greece has already been hit by the 'interest' effect. The country can only pay the interest on its loans by taking out more loans -- which automatically pushes up its interest rates. At some point the only thing left will be insolvency. The situation in Spain is also a cause for concern. It could be faced with a crash of its savings banks, which financed the Spanish construction boom and now have to write off many of their mortgages."

"When faced with a crash, there is no alternative but to save -- however, it is also obvious that the austerity programs will stall the economy even further and push up the deficit instead of down. And this recession will not just be confined to the potential insolvency candidates, but will also reach Germany soon, which exports 60 percent of its goods to Europe. The EU could, therefore, be facing a double-dip recession."

"It may seem a paradox, but the worries about the euro zone have been to the benefit of European companies. German exporters are getting a shot in the arm thanks to the weak euro. And the hope that a strong recovery in the global economy could influence the market assessment of the euro zone is justified."

"Despite the rescue package and the fact that the European Central Bank (ECB) is buying government junk bonds, investors are still nervous because of mistrust. They doubt the ability of the euro-zone governments to implement their austerity and aid programs. If the economy were to improve, this mistrust could ease."

"The doubts are more than justified. In order to reduce their deficit, the Greeks have to implement an austerity program that is not really reasonable. If the brutal savings plan completely stalls growth, then the deficit countries will lack the income to reduce their mountains of debt. And if neighbors like Germany and France also come under pressure financially, then their pledges of aid will be of less value."

"Only an unexpected upswing can make these savings goals attainable.  There is a chance that trust in the euro zone could return.  Investors have to take into account the fundamental developments in the economy. If the idea that Greece and the rescue package have no chance becomes a firm belief, then all of this won't help at all."

"Angela Merkel has pushed the idea that Greece has to impose cutbacks to reduce its debts.  Now it is time for Merkel to also make clear how she intends Germany to save.  Germany can only win back its leadership role in Europe this way. It was lost last weekend during the decisions in Brussels to create a fund worth billions. It was the president of the ECB, the Frenchman Jean-Claude Trichet, who called for it, and rightly so."

"Merkel now has to reinvent herself as a savings chancellor. It is imprinted in the DNA of all politicians that the distribution of money creates room for maneuver. The debt mountains and the euro crisis are now forcing politicians to correct this reflex from the good old days. They can no longer give to everyone, but instead have to decide who to take from. For Merkel that means a real reversal of roles. She has to prioritize and make unpopular decisions -- and enforce them in the face of bitter opposition. Something she has avoided as much as she could during her chancellorship."

"It is exactly because Germany, as the motor for European integration, has to become an example for the euro zone, that the debate about savings is more than simply making cuts in different departments. Only those who have their own finances in order can make sure that the idea of solid finances becomes the guideline for the euro zone once again."

"Politicians from all parties are suspicious of ominous forces that have declared war on the euro. Yet it is the politicians themselves who are responsible for the crisis."

"Speculation is a gamble and a bet needs at least two participants. That means whoever wants to sell the euro, because of its falling value, has to find someone who will buy it at that price and hope its value increases. One of the two loses and supply and demand decides who. If the majority of investors believe the euro will fall in value, then it falls in value in reality. But that depends on the lack of trust in the stability of the euro and the real economy that is linked to it, not the evil speculators."

"High taxes, a bloated state, no obvious savings efforts and increasing social costs all threaten our economy, not the bad financial powers. The markets are betting on the weakness of Germany and Europe -- and just as many are betting in the other direction. The euro is as stable as the euro zone's growth prospects."

"The Greece crisis has shown that the currency union cannot function without more economic and budgetary convergence. That the EU states have understood this message from the financial markets is shown in the speed with which countries like Portugal and Spain, but also France (and Germany will follow)  are introducing savings programs that up to now had been extremely controversial. As a remedy, the EU Commission has suggested developing the Stability Pact so that it actually functions, by including monitoring and punishment."

"It is, however, also clear that the EU member states' room for maneuver will be reduced by a 'tougher' Stability Pact. There will be opposition in national parliaments and the feeling of being controlled from abroad will increase amongst the people. Is an 'enforced deepening' of EU integration, which today seems an unavoidable consequence of the currency union, politically enforceable? Merkel said that if the euro failed, then the idea of European unity would fail with it. Will the voters believe her?"

"The European Commission's idea of appraising national budgets of member states in advance seems sensible. But is it also democratically legitimate? In terms of the economy, it is indispensable that the obvious initial mistakes in the Stability Pact be fixed and that national governments manage their economies in line with the rules. After all, the casual-to-ignorant way with which they have treated the European rules led directly to the current crisis over the euro."

"It is, however, understandable that concerns are growing in national parliaments that the Commission is presuming to interfere with their own right to decide on national budgets."

"If the Commission simply insists on checking the national budgets in advance, to make sure they conform to European rules, then there is nothing to criticize. From a democratic point of view, however, it would be completely absurd and illegal if, in the name of the EU, the Commission were to dictate measures to individual countries. This would be an existential threat to the euro far greater than the current crisis." 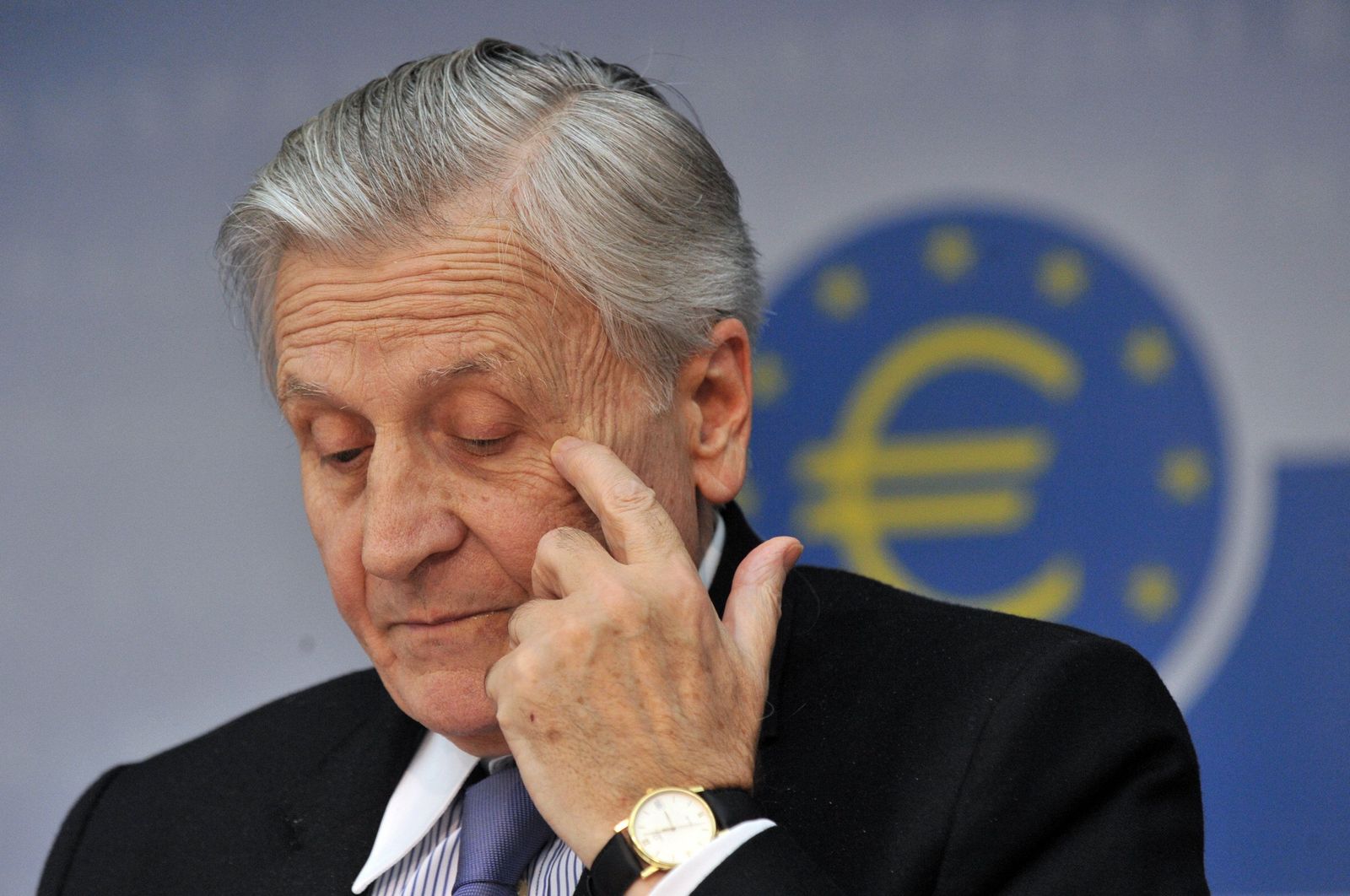 Head of the European Central Bank Jean-Claude Trichet isn't the only one concerned about the future of the euro.