The good news is that Greece will remain solvent until mid-November, despite the decision reached on Monday evening by euro-zone finance ministers meeting in Luxembourg to delay payment of the next tranche from the €110-billion bailout fund put together in 2010. That, at least, is what Greek Finance Minister Evangelos Venizelos said on Tuesday. Athens, he said, would have "no problem" meeting its domestic and international obligations.

The bad news, though, is that such reassurances are no longer enough to calm jittery markets. European stock markets plunged for the second day in a row on Tuesday amid growing concerns that avoiding insolvency may no longer be possible for Greece. Many see the delayed payment as yet more evidence that Athens has not fulfilled its austerity pledges made when the bailout package was assembled.

Furthermore, Greece revealed on Sunday that it's 2011 budget deficit would be a significantly larger proportion of its gross domestic product than it had promised in exchange for a second bailout, worth €109 billion, tentatively agreed to in July. Compounding the problem, on Monday new information also showed that the Greek economy would likely shrink further in 2012, instead of registering the slight growth officials had been hoping for.

Athens had originally insisted that funding would begin drying up by mid-October without the pending €8 billion payment tranche. That payment depends on the result of a report currently being assembled by the International Monetary Fund, the European Union and the European Central Bank, the so-called "troika."

A Means of Buying Time

Jean-Claude Juncker, who heads up meetings of euro-zone finance ministers, also said on Tuesday that Greece -- overwhelmed with debts that equal some 160 percent of its economic output -- would remain solvent until November without the payment. "Everything will be done to avoid (insolvency) and it will be avoided," Juncker told news agency AP early on Tuesday morning.

The payment delay is seen by some as a means of buying time until a better strategy can by found. Even as the European Financial Stability Facility (EFSF) is now being boosted to increase its lending capacity to €440 billion, many say that won't be enough and are calling for yet another expansion of the fund, though leaders in Berlin have firmly rejected such a course of action. Others would like to see the fund use its assets to borrow up to €2 trillion for potential bailouts.

"We need a more flexible and powerful EFSF as a financial firewall to contain contagion and allow for the recapitalization of weakened banks," said EU Monetary Affairs Commissioner Olli Rehn.

With pressure increasing on both Athens and the euro-zone leaders to stabilize the crisis, civil unrest continued to swell in Greece, with protestors blocking off federal ministries across the capital on Tuesday morning in protest of austerity measures.

German commentators assess the desperate situation on Tuesday, with some suggesting that a Greek exit from the euro zone may be the only way to ease the currency crisis.

"The Greeks don't deserve this. It's been one bad news story after the next: The economy is shrinking even more quickly than feared. Correspondingly, the budget deficit is growing to dizzying heights. The population is groaning under the government's austerity measures, but they still aren't adequate. Meanwhile the European currency union lacks the proper perspective for helping the Greeks re-establish their country both politically and economically."

"Only two options are plausible. Greece could choose what amounts to an orderly insolvency. The country would also have to resign itself to having its assets managed by an insolvency administrator just like a corporation, giving up rights that are indispensable to a sovereign land. Right now it doesn't seem like this solution will come into play. A closer look reveals the Greeks continue to block outside help … leaving only the second option: Greece's exit from the currency union and a debt haircut. After this the Greeks would again have room to breathe and prospects that would make it worthwhile to roll up their sleeves."

"No, the Greeks should not fall. But as we've seen for years, the endless, unimaginative contribution of more money leads to a stagnation of the financial crisis rather than to its solution. Without the will of the country concerned, no therapeutic measures will work. But the cultural revolution that would spawn such a will has yet to begin, and can only be brought about by the Greeks."

"They must, however, be empowered to take action on their own. And this is not possible within the euro zone. Remaining under its support means a euro guardianship with protectorate-like conditions -- and that will lead to resistance. No, Greece needs the freedom to act, meaning its own currency which can then be devalued to stimulate the economy."

"The finale of the Greek drama is drawing inexorably closer.... But because the political decisions are highly complicated and happen much more slowly than the markets demand, the ministers appear to have become specialists in buying time. With assorted tricks -- such as the announced and then later delayed arrival of the troika in Athens, or the oft-renewed negotiations with the Greek government -- they are providing themselves with breathing room. At least until they can be sure that the final act will be played out with limited collateral damage."

"But that can only work -- if at all -- once the expanded European Financial Stability Facility (EFSF) is completely operational. So far it's not.... The conditions for assistance still need clarification too. Above all, there needs to be clarification over whether the current credit amount of €440 billion will be enough or not. As long as these things aren't clear, the ministers will have to continue to buy time."

"Even as parliamentarians work on the second rescue package, Athens' new deficits show that soon a third rescue package will be necessary. A number of politicians and experts are thus yearning for an 'orderly insolvency' for Greece to finally stop the carousel of billion-euro loans."

"Actually an insolvency -- also called debt relief -- could be agreeable, because the Greeks will never be able to fully pay back their loans. Still insolvency is no solution, because only past loans will be settled. The Greeks, however, continue piling up new debts, as the current budget deficit shows."

"Thus Greece will continue to need help for a long time. But consolation can still be found: Europe can afford it. After all, Greece only has 11 million residents -- and an economic output equivalent to the German state of Hesse." 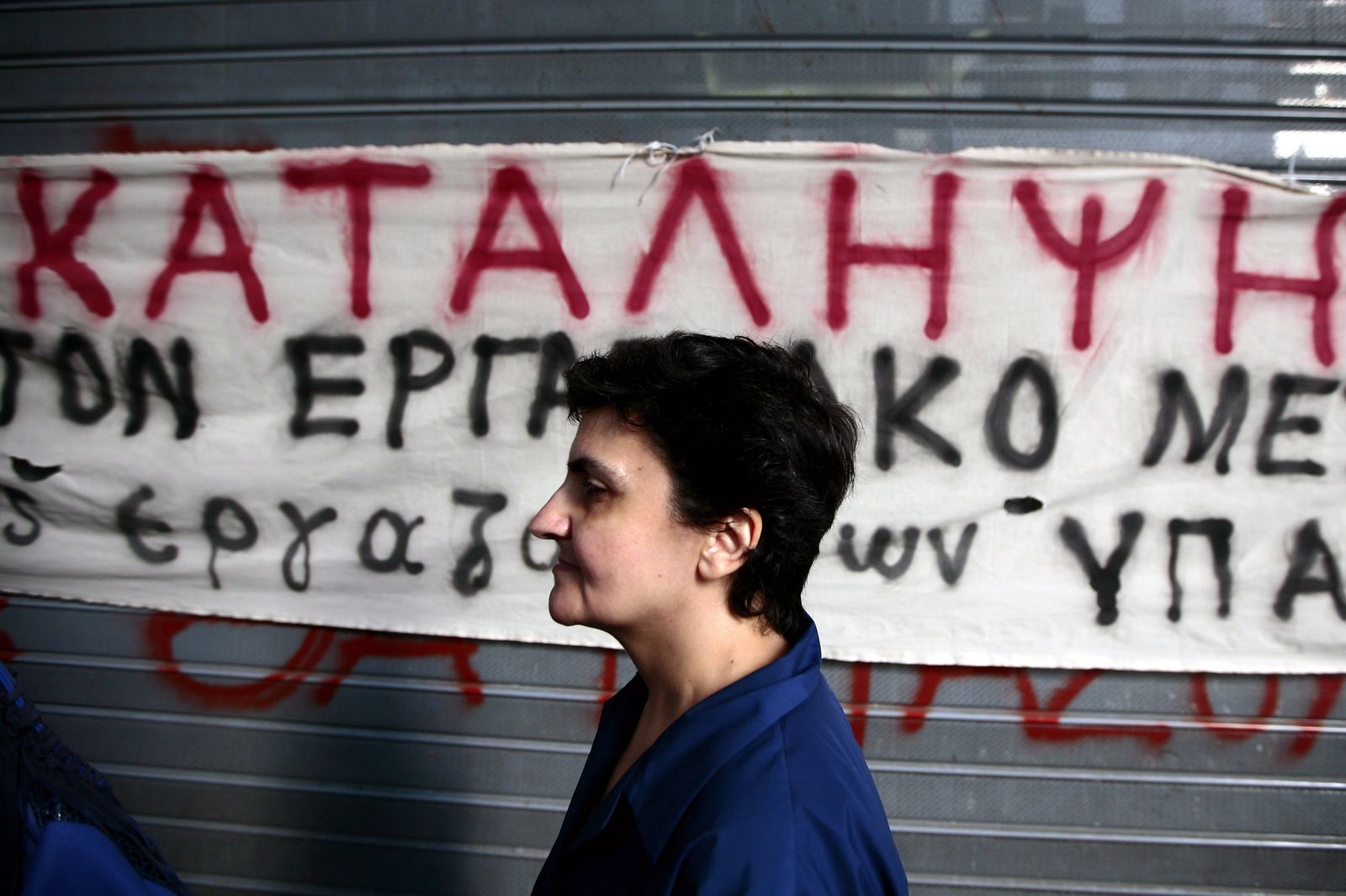 A Greek Finance Ministry employee during a sit-in on Tuesday, when Ministry workers staged protests of austerity measures across Athens.