German general elections aren't until 2013, but it would appear that the campaign has already begun. Even more surprising, the initial stages of the stumping are taking place across the border in France.

Following Chancellor Angela Merkel's controversial pledge to back fellow conservative French President Nicolas Sarkozy on the campaign trail ahead of elections there this spring, Germany's opposition Social Democrats have said they will throw their support behind Sarkozy's challenger, Socialist Francois Hollande.

In an interview with the daily Rheinische Post, SPD deputy head Hannelore Kraft said "the SPD will naturally also support the French Socialists during the campaign in France."

Other opposition politicians have found sharper words for Merkel's decision to take sides in the French vote, the first round of which is scheduled for April 22. Jürgen Trittin, parliamentary floor leader for the Green Party, said that Merkel campaigning on behalf of Sarkozy could "damage German-French ties," particularly given the substantial lead Hollande currently enjoys in the polls. Sigmar Gabriel, head of the center-left SPD, called Merkel's move "rather embarrassing."

The comments came on the heels of a joint television interview given by Merkel and Sarkozy in the Élysée Palace in Paris on Monday afternoon. The German chancellor insisted that the interview was not a campaign event, particularly given that Sarkozy has yet to formally declare his candidacy for re-election. But many of the questions posed by the two interviewers, one from German television station ZDF and the other from French broadcaster France 2, focused on her decision, announced late last week, to engage in some unconventional cross-border stumping.

Merkel's strategy was deflection. "I support Nicolas Sarkozy in every area because we belong to the same political family," Merkel said. "I find it perfectly natural to support him in a campaign." She also dodged questions about her demurral regarding a proposed Berlin visit by Hollande. "We haven't decided yet," she said, adding that such visits are decided on a case-by-case basis. "I think we have more important problems to solve than this one." SPIEGEL reported this week that the Chancellery in Berlin has been looking for a diplomatic way to turn down Hollande's request for a visit.

Merkel is concerned that, should Hollande take over the reins in Paris, her efforts thus far to stabilize the euro could be endangered. He has said he is in favor of introducing euro bonds, which Merkel is adamantly opposed to, and would like to renegotiate the recently signed fiscal pact, a central pillar of Merkel's approach to solving Europe's debt crisis.

Hollande's substantial lead in the public opinion polls over Sarkozy has allowed him to be philosophical about Merkel's support for his rival. "The fact that Nicolas Sarkozy needs Ms. Merkel says a lot about his situation," Hollande said during a Monday campaign appearance in Dijon. "That's some task she's taken on."

"It is honorable that German Foreign Minister Guido Westerwelle, in reference to Merkel's pro-Sarkozy campaign, points out that the German government is not a candidate in the French campaign. Yet in this new, changed Europe, it is, in fact. Particularly given the future Merkel sees for the Continent -- a view that the French Socialists do not share. Never before has Germany intervened to such a degree in French domestic policy. A taboo has been broken, but the timing was right."

"The Socialist candidate, Francois Hollande, feels it is his calling to turn back the leftist clock to the 1970s and he is confusing the voters with all manner of campaign promises -- promises that are contrary to all economic reason.... Hollande's 60 Point Program is like a best-of list of left-wing populism. The French in the future are to be allowed once again to retire at age 60, taxes are to be raised broadly, the public sector enlarged, financial markets regulated and the banks broken apart. Given this retro-socialism, it isn't surprising at all that he wants to repeal the fiscal pact and introduce euro bonds -- and of course use the European Central Bank as a money-printing machine. Hollande's victory would be the end of Franco-German leadership in Europe. Although only the 45 million French voters can cast their ballots in the presidential elections, the vote is important for everyone in Europe."

"The question is whether (Merkel's cross-border campaigning) serves German or European interests. As chancellor, there is little for Merkel to win, but she is risking a substantial worsening of Franco-German ties -- with potentially drastic consequences for the entire euro zone."

"Merkel's campaign appearances are not likely to inspire those undecided French voters whose support Sarkozy needs to win re-election. Furthermore, left-wing challenger Hollande is far ahead in the public opinion polls. He could feel it necessary to now campaign against the German economic model in order to distance himself from Germanophile Sarkozy. And if he wins the election, he will hardly open his arms to a Merkel who campaigned against him. Merkel's strategy will not make future talks over euro pacts any easier."

"In hindsight, it could be that Feb. 6 will be seen as the day on which a desperate chancellor grasped at a straw. If Merkel takes Hollande's campaign promises seriously, then she has to be concerned about continuity of all that she has accomplished in Europe. The Socialist does not want austerity, rather he wants to stimulate the economy. The largest living danger to Merkel's fiscal pact bears the name Hollande. As such, the chancellor isn't campaigning in France for Sarkozy so much as she is campaigning for her own policies. Seen like that, her game may be risky, but it no longer appears irrational."

"The crisis will force the chancellor to work closely with the French president, no matter who wins. But the more openly Merkel snubs Hollande in the campaign, the more time it will likely take (before they form a working relationship). It is time that Europe does not have."

"The facade of unity between the two pilots of the euro zone seems to have begun impressing the financial markets. The hectic ups and downs seen last fall have calmed for now. Berlin and Paris see that success as a consequence of the 'Merkozy' show. The most dangerous threat to this harmony is the Socialist presidential candidate Francois Hollande. One can imagine what the consequences would be were he to fulfil his promises and tear up the fiscal pact and renegotiate it. The financial world would once again erupt in turmoil and recent European policy would be a shambles. That is the reason why Merkel is standing at Sarkozy's side in the presidential election campaign. European policy -- in this respect, Merkel is right -- has become domestic policy in Europe." 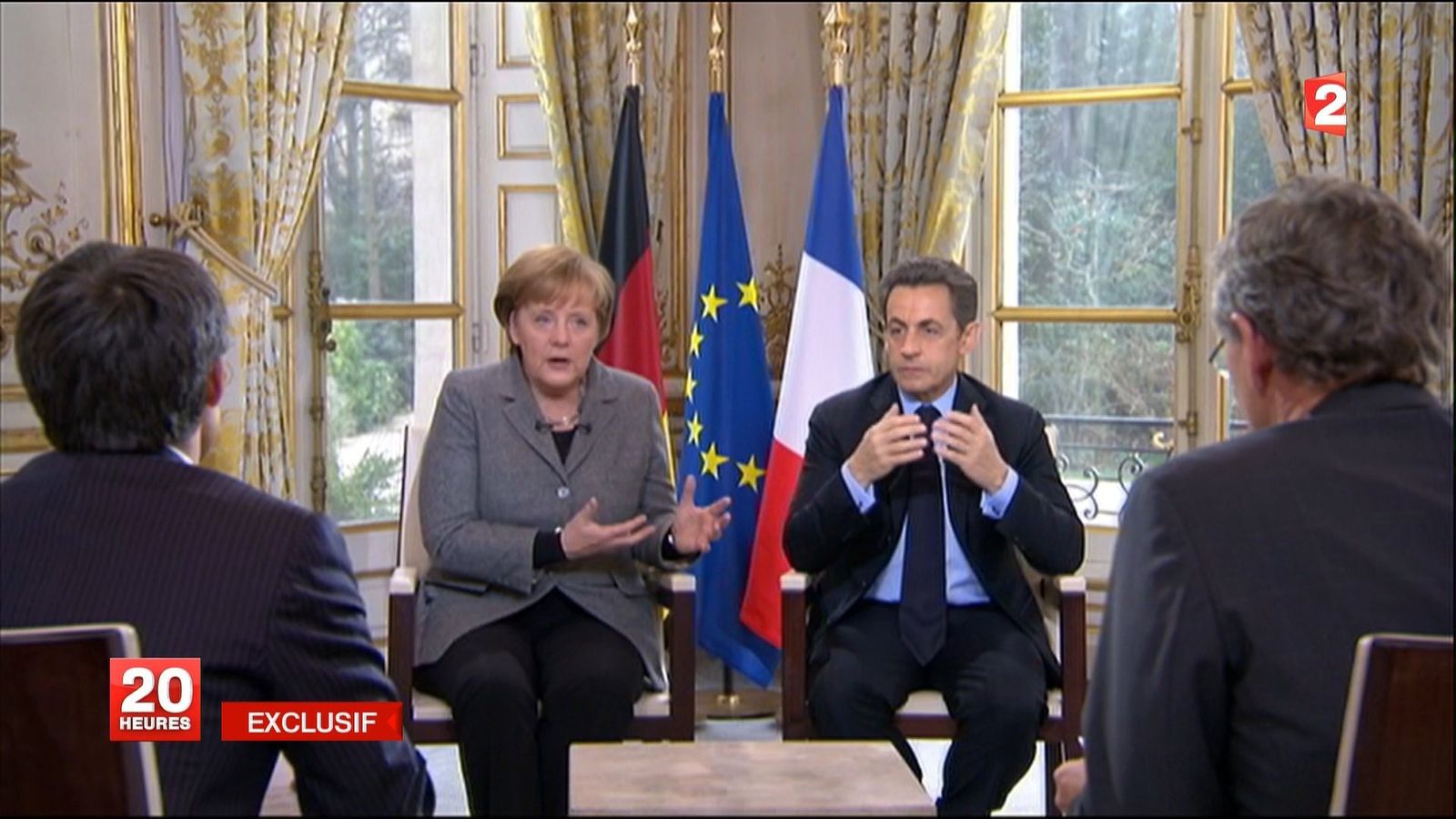