As expected, an overwhelming majority of voters in Iceland voted "no" in a referendum held Saturday on a plan which foresaw the country paying back €3.9 billion ($5.3 billion) to Britain and the Netherlands. The money was to have been earmarked to compensate those countries' for their reimbursement of 340,000 people who lost their savings when Icesave, an online subsidiary of Landesbanki, collapsed along with its parent in the fall of 2008.

"This is a strong 'no' from the Icelandic nation," Mangus Arni Skulason, one of the founders of a group opposing the deal, told the AP. "The Icelandic public understands that  we have to be treated like a sovereign nation -- not being bullied like the British and the Dutch have been doing."

The county's parliament had approved the plan last December. But after some 23 percent of Icelanders signed a petition against it, Icelandic President Olafur Ragnar Grimsson refused to sign the bill and called for a national referendum.

Particularly galling to many in the country was the British decision -- using provisions belonging to anti-terror legislation -- to freeze the assets of Landesbanki in Britain as well as some assets belonging to the government of Iceland following the bank's collapse. Furthermore, say others, the compensation agreement would have required Iceland to pay for the lost savings in full rather than the lower guarantees customarily offered to savers by deposit insurance schemes.

"The referendum was not about refusing to pay back the money," Grimsson told the BBC. "Iceland is willing to reimburse those two governments, but it has to be on fair terms."

British, Dutch and Icelandic negotiators are still searching for a solution to the impasse, and Icelandic Finance Minister Steingrimur J. Sigfusson said, "It is important that we do it as quickly as possible." British Finance Minister Alistair Darling told the BBC on Sunday that "the fundamental point for us is that we get our money back, but  we're prepared to be flexible."

Iceland is particularly interested in a solution out of fear that Britain and Holland could block progress on a €2.1 billion rescue package for Iceland from the International Monetary Fund as well as its bid for European Union membership. Seeking a safe haven from its financial woes, Iceland applied for EU membership on July 16.

In Monday's newspapers, German commentators weigh in on whether the Icelanders have made the right choice.

"Icelanders are placing part of the blame for the crash of their banking system on shortcomings in Europe's financial system. Many argue that the EU made this system itself. But Iceland chose to be part of that system. Before the crash, the island-nation's politicians were more than happy to accept the rules of the game for European financial markets, and they even helped their banks. At best, they might have been starry-eyed -- and possibly even corrupt. ... Either way, they were elected representatives of the people, so the Icelanders bear some responsibility for the calamity."

"Still, the critics in Iceland are right about one thing, namely, that the body of international rules and regulations is full of holes. If it hadn't been, bankers in Reykjavik would have had a much harder time plundering small-time investors overseas, with little oversight, and pushing their country to the brink of bankruptcy. European financial market regulations did not cause such activity, but they also did nothing to prevent it. As such, EU member states also bear some responsibility. A new Icesave agreement should reflect these facts and distribute the burdens between the affected states accordingly."

"(Iceland's voters made) a wise decision. Otherwise, they would have destroyed their country. It's bad enough that, two years ago, London and The Hague made up for the losses of their citizens who had invested in the collapsed Icesave bank. Why should a country compensate investors who voluntarily put their money at risk in the hopes of making exorbitant profits? Those who hand their money over to shady speculators do so at their own risk. Demanding the lost money from every single Icelander goes against the logic of market capitalism."

"Of course, Icelanders also bear responsibility for the fact that their banks were insolvent. Over the course of a decade, lured by the promise of becoming the world's wealthiest island, Icelanders supported their government's market-friendly policies, which in turn eliminated the Scandinavian-type welfare state it previously had. That's enough for them to deal with already."

"Since the outbreak of the financial crisis, it has become fashionable for countries to privatize bank profits while collectivizing their losses. The Icelanders have dared to refute this principle. To point fingers at them now and complain is just plain wrong. What other Western population would have decided otherwise in a referendum?"

"The Icelanders have held their ground -- and are right to do so. Why should they foot the bill for the debts that a handful of financial oligarchs piled up ...? Such a vote would have turned out the same in Germany, Great Britain or the United States, had their populations had been allowed to vote bank bailout measures."

"The Icelanders have put an important twist on the debate over how to work through the financial crisis. What's tragic is that, in settling this matter of principle, they have created an obstacle to their future. The affront this causes to two EU member states might make their EU accession more difficult."

"As long as things were going well for them, British and Dutch Icesave customers pocketed high interest payments, so both sides are responsible.  For the next round of negations, there should be an independent mediator at the table. The law of the strongest should not hold sway when it comes to countries that are friends."

"Iceland is the testing lab of the financial crisis, and it brings up a lot of questions. What would happen if a population could vote on whether to bear the costs for its banks' losses? Or the debts that its politicians have piled up? The question is not as crazy as it might sound. One of the core elements of any democracy is popular control over tax revenues. Bankers and politicians have a lot to be afraid of because, in the past, they have made so few efforts to explain to people the oft-invoked 'systemic risk' for which they are spending the money of other people and generations. But, for their part, citizens and consumers must also recognize that they tolerated this shortcoming for far too long. 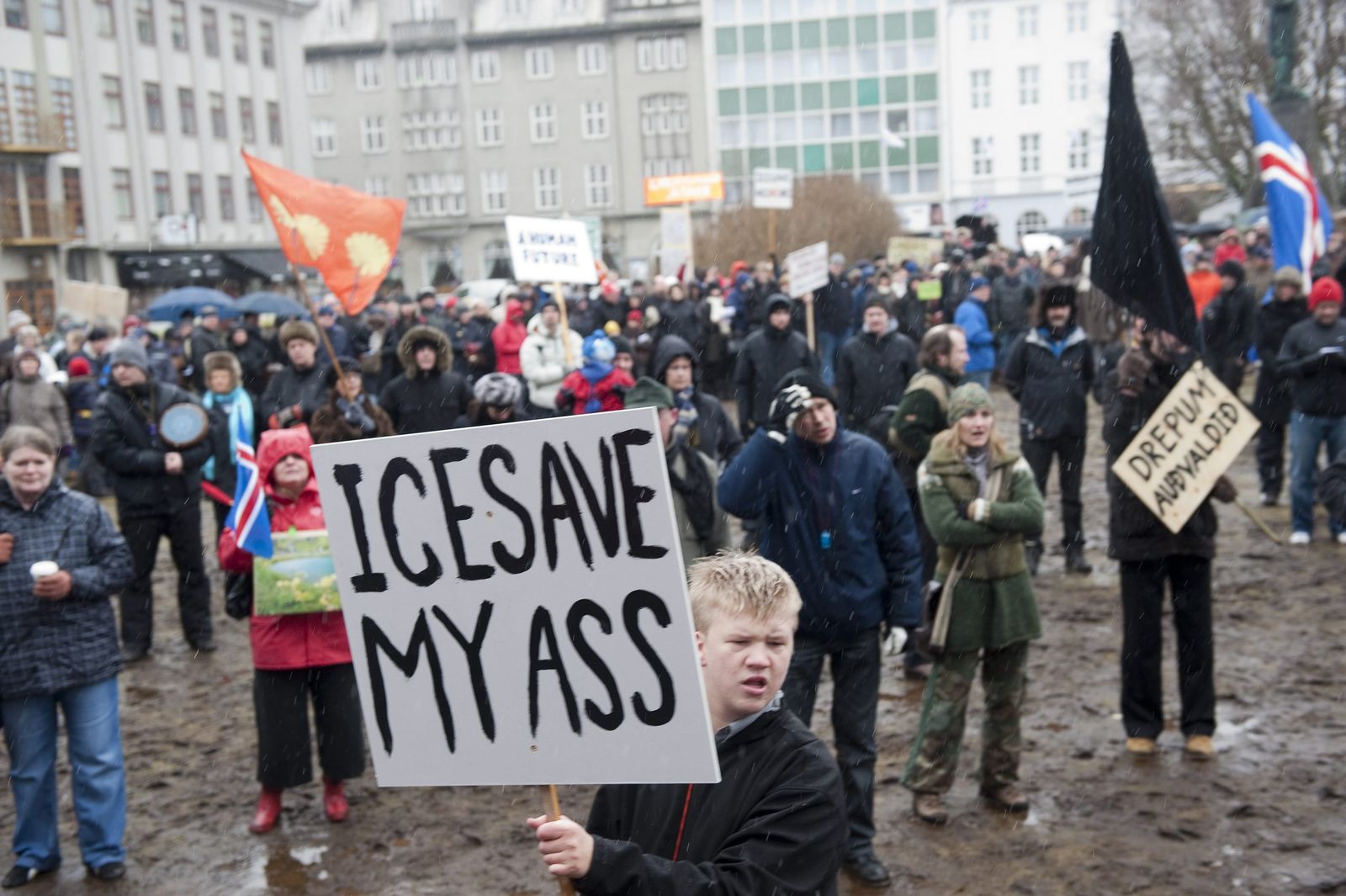 Protesters in Reykjavik voice their opposition to a plan to compensate Britain and the Netherlands for money used to reimburse people who lost savings when the Icesave bank and its parent company collapsed in 2008.