Angela Merkel and Nicolas Sarkozy seemed to shrug off the warning by American ratings agency Standard and Poor's that it may remove the top rating for Germany, France and four other AAA countries in the euro zone because of the ever-worsening euro crisis.

Still, the development is being viewed in Berlin as a warning shot ahead of a major euro crisis summit on Thursday and Friday that some are speculating could determine the fate of the currency union.

S&P has warned that a downgrade should be expected if decisive steps aren't taken at this week's summit. "Systemic stress in the euro zone has risen in recent weeks and reached such a level that a review of all euro-zone sovereign ratings is warranted," S&P said in a statement.

The ratings agency also indirectly criticized Germany's obsession with austerity measures,and warned that saving alone will not save the euro. "As the European economy slows, we believe that a reform process based on a pillar of fiscal austerity alone risks becoming self-defeating, as domestic demand shrinks in line with citizens' concerns about job security and disposable incomes, eroding the revenue side of national budgets," the agency said.

In an analysis, center-left Süddeutsche Zeitung newspaper writes that "in order to correct these imbalances, it will not be sufficient to demand austerity measures from deficit states. Equally important will be to strengthen the economies in the affected countries, particularly in the export sector, through targeted investments. And the surplus states will also have to change if the euro is to have permanence, especially Germany." Analysts at S&P, it seems, are seeking to shift the debate beyond state finances and into the need for more economic governance to address massive imbalances in the euro zone.

But the more immediate concern for many right now is what a ratings downgrade would mean for efforts to bail out the euro. Finance experts have stated that if a single AAA euro-zone country loses the coveted top rating, it could spell doom or at least massive problems for the euro bailout fund, the European Financial Stability Facility (EFSF). Affordable lending to crisis-stricken countries in the euro zone is contingent on the EFSF maintaining its top credit rating for the €440 billion backstop fund. "The fund would no longer function," warned the Süddeutsche.

Like German politicians, editorialists at the country's major newspapers on Wednesday suggest they knew this was coming given the recent spate of negative euro headlines. Most argue it should serve as a warning for Europe's leaders to act this week.

"The economic and political reasons for the threat of a ratings downgrade are no more surprising than the large number of debtors affected by it. S&P is following the decisions of the investors who are clearly withdrawing their trust in the euro.

"The creditworthiness of even the best debtors is suffering. The calm market reaction to the decision by S&P shows once again that ratings agencies are no early warning system, but instead serve as a late alert."

"The move has political meaning. With its sharp criticism the agency aims to force decisions in its favor at the crisis summit. It is casting off its role as a credit ratings agency and taking on that of a decision-maker. S&P is claiming to speak in the name of investors, who must frequently follow ratings decisions due to supervisory standards that lawmakers would do well to question. But the ratings agency has no political responsibility. It also has no claim to sole representation on the market. Standard & Poor's is an agency from the United States that looks through an American lens when grading countries and companies, and in doing so represents the interests of Wall Street."

"S&P is making itself easy prey for critics. Why did the warning come so shortly before the summit? Why is the accompanying report so full of policy recommendations?"

"That said, however, the substance of what S&P is saying is quite right. In recent months the euro crisis has eaten its way into the core of the euro zone. No one is being spared in the crisis, it's hitting banks, which are lending less as a result, and in Germany it is even affecting a bank like Commerzbank, the country's second-largest private bank. Next year it will lead to a stagnation of the European economy, or even a recession. In Germany, the yield on government bonds has risen above that on US Treasuries for the first time since early 2009 -- another crisis indicator. Despite its mountain of debt, America today is regarded by investors as a little bit safer than Germany -- despite the S&P downgrade this year."

"There are good reasons for S&P's warning shot, and it is one that comes at the right time. Germany is itself currently in solid enough shape to deserve the AAA top rating. But in the course of the bailout efforts, it has already taken on massive liability risks. An estimate by the Ifo Institute economic think tank has concluded that the amount has already swelled to a half-trillion euros."

"Nevertheless, and S&P's message also serves as a reminder of this, the political crisis managers are, at the moment, in no way focusing on the long-term solidity of the currency union. Instead, all efforts are focused on quickly calming the situation. The rules for greater budget discipline Merkel and Sarkozy are so doggedly insisting on don't even seem to be about that discipline. Instead they are intended to provide the European Central Bank with a short-term pretence to print even more money than previously as a kind of interim loan in exchange. But the financing of state debt through the money press can never be a permanent and sustainable plan. It is also doubtful whether the new rules will be enough to force European capitals to return to fiscal self-responsibility."

"Still, the S&P announcement has already made one difference. If, in the end, the euro zone finally does degrade into a liability union that would also overwhelm Germany financially, then no one could say that they weren't warned in time."

"S&P is now even threatening the AAA countries of the euro zone with a possible downgrade (yes, Germany too!), and the European rescue fund along with them. And what happens? Nothing, or at least not much. The markets only signalled that they know all that already. And even Europe's politicians responded with little more than an irritated shrug. Yes yes, the rating agencies, they're just one voice among many. At best, the S&P warning is further encouragement for the upcoming euro summit, they say."

"And ever since the downgrade of the United States, no one really believes that a rating cut automatically leads to higher interest rates for a debtor country. Bond yields in the US are now even lower than they were under the AAA rating. There's a simple explanation for that: Investment decisions are always foremost a question of alternatives -- and not of letter combinations."

"No, this is not a conspiracy against the euro. There is a much more banal reason that S&P chose to hold Merkel and Sarkozy liable, threatening to downgrade even the best financial ratings of financially strong countries like Germany on the day the leaders possibly reached historic decisions. And this is that S&P simply does a lousy job with communications. Nevertheless, Europe shouldn't angrily toss out the warning. The 'Merkozy pact' still has gaps that must be filled at the EU summit on Thursday."

"This is all uncomfortable, but not the end of the world. The markets have long known about and factored in the things that S&P is now criticizing. Still, the ratings agency is pouring salt on a couple of open wounds, for which Merkel and Sarkozy have yet to find a remedy. And this is where Europe needs to listen up. It remains totally unclear whether the political input of 'Merkozy' will be enough for European Central Bank chief Mario Draghi to fulfill his part of the 'silent pact' and buy up more government bonds. Without the ECB's help, it can hardly work." 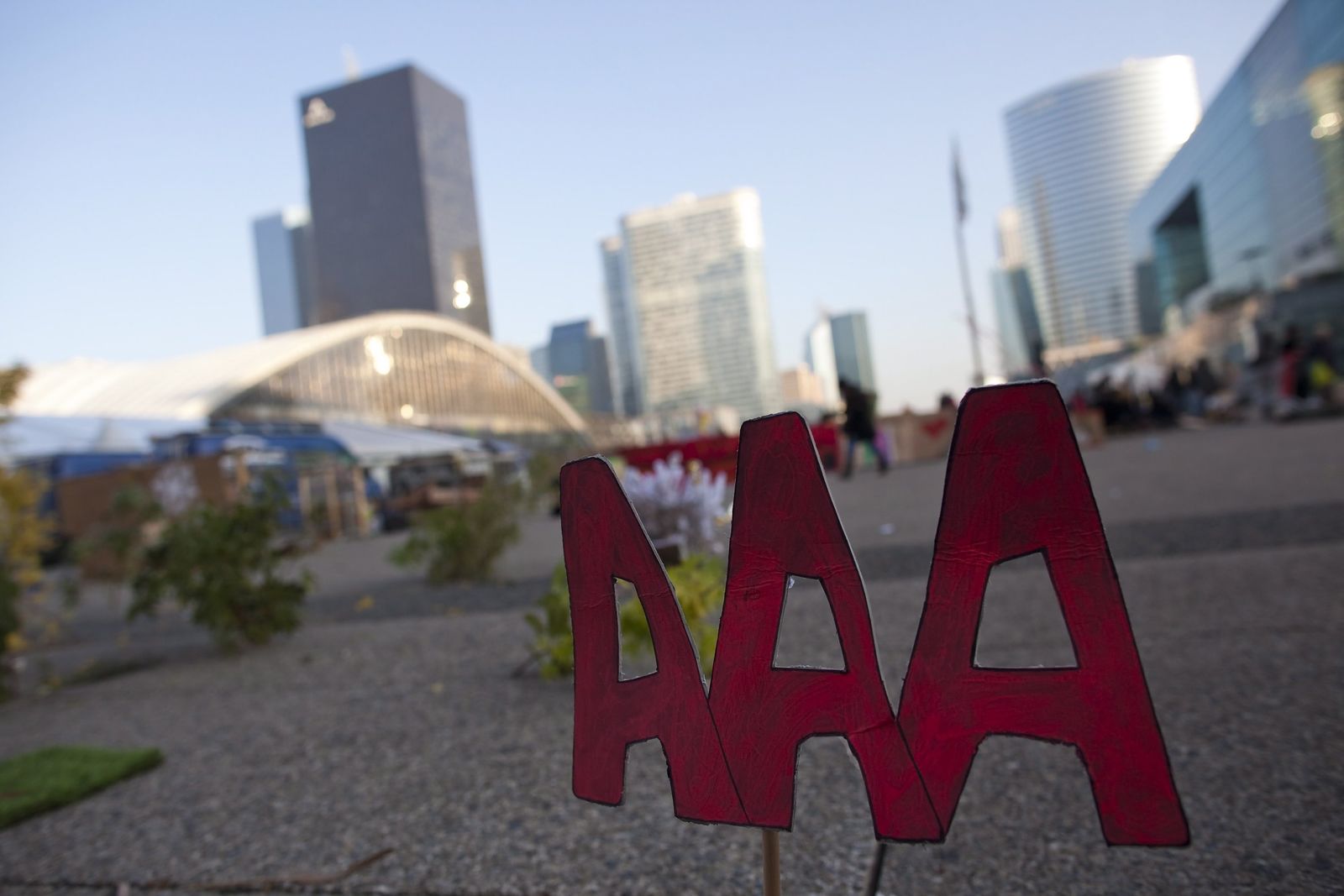 A cardboard cutout stands near Paris' La Defense financial district. S&P warned Tuesday that the six AAA-rated euro-zone countries including France and Germany could be downgraded.