The Dutch monarch, Queen Beatrix, is likely to have a busy day on Friday. The leaders of all 10 parties who won seats in elections on Wednesday are to pay a visit to the palace as they begin the tentative moves to form a coalition government.

Leading contender for future prime minister is undoubtedly Mark Rutte, the head of the free-market VVD party. However, his party only captured one more seat than the center-left Labor Party, led by Job Cohen. And then there is the right-wing populist Freedom Party (PVV) lead by the contentious Geert Wilders.

Current Prime Minster Jan Peter Balkenende has said he will be bidding farewell to politics after his Christian Democrats were pushed into fourth place and their seats slashed by almost half, but he may not be going anywhere for a while. He is to stay on as caretaker prime minister until the other parties can thrash out a deal. It could take weeks -- or even months.

None of the parties have the necessary seats to form a majority in the 150-seat parliament. And even combinations of two parties won't make up the requisite 76 needed to form a government. Rutte's VVD emerged from Wednesday's vote with 31 seats, an increase of 9. A good result but hardly the huge surge that had been predicted before the election.

It was largely thanks to Cohen, the former mayor of Amsterdam, that the Labor Party managed to rally its supporters and win 30 seats. However, the tally that is most likely to cause a headache to the other parties is the strong showing of the Wilders' PVV which managed to almost triple its seats from 9 to an impressive 24. Most parties to the center and left would balk at having to share power with a party that has campaigned on a radical anti-foreigner and anti-Islam platform.

The VVD also ran on a program of containing immigration, though in a far less radical manner than Wilders. For example, Rutte wants to prevent immigrants from accessing welfare programs for 10 years after arriving in the country. But the crux of the party's pledges focused on the economy and on slashing the deficit in particular. It says it wants cuts of up to €39 billion ($52 billion.) The Labor Party, on the other hand, has advocated increasing taxes on the wealthy.

Rutte has said that while the results were complicated he hoped to form a government. "I would like to see a new cabinet put together as soon as possible because of the seriousness of the economic crisis," he told reporters on Thursday.

After Queen Beatrix has got through her meetings with the leaders she will appoint a negotiator to open preliminary talks with the potential coalition partners.

On Friday the German press highlight the fragmentation of Dutch politics and some suggest it is a harbinger of things to come elsewhere in Europe.

"Some might be wondering what has gone wrong with the Dutch. This small country, regarded as tolerant and open to the world, of all places saw two right-wing populist parties gain more than 30 percent of the vote in Wednesday's elections."

"The sad reality is: the liberal multicultural Netherlands, in which everyone can live how -- and smoke what -- they want, is largely a foreign myth. The economic crisis has only strengthened and made visible the actually conservative and at times narrow-minded tendencies in the society."

"That does not mean that the Dutch are an Islamophobic people. Rather it was the widespread fear of downward social mobility that was reflected in the election results. The conservative-liberal election victor Mark Rutte says that immigrants are welcome -- as long as they are of use to the economy. However, he wants to exclude them for 10 years from the social and welfare services that foreigners currently have relatively easy access to in the Netherlands. And his party sees potential for savings with 'the others' -- for example by cutting development aid or contributions to the EU. In the end, this election was less about a clash of cultures than about money."

"No, it was not a 'glorious day for the whole of the Netherlands,' as Geert Wilders shouted to his followers. The people's fear and insecurity pushed a lot more voters than expected into the arms of the right-wing demagogues. Regardless of whether his party will now take part in a government or not, it is now an essential factor in The Hague's political landscape, that won't be possible to overlook. In their joy that the economic and financial crisis had seemed to overcome the eternal issue of the integration of foreigners, the competition underestimated the dangerous populists."

"The good showing for the right-wing populists is regrettable for the Netherlands. The election result, though, is part of a Europe-wide trend: the fragmentation of the party political landscape. Five or six parties of the same size are fighting for power in The Hague.  The voters have hardly any loyalties, they flit helplessly from party to party. There are no longer any catch-all parties. For neighboring countries the writing is on the wall."

"Has the Netherlands now distanced itself from the circle of civilized democracies? Quite the opposite, in fact. Over the past few weeks the arguments during the many debates have been tough but full of respect. The citizens took an active part and showed themselves to be engaged democrats with a turnout of around 75 percent."

"The historic victory of the conservative-liberals is reminiscent of the heights reached by the FDP last autumn, when the German liberals raised great hopes of reforms and attained their best ever result in a federal election. Mark Rutte will need a lot of strength to bring together a coalition that can carry out his ambitious program of budget reform and cuts to social spending. The Netherlands is similar to Germany and in some respects ahead of it. It will be revealing for us to watch how our dynamic neighbor deals with the problems of the hour."

"It is a strange phenomenon: a party announces drastic cuts and tough austerity measures and is raised from obscurity to election winner."

"What is the success of the conservative-liberal VVD -- a party whose neoliberal agenda was barely tolerated by the Dutch just a few years ago -- based upon? Is this a principle of the hair of the dog -- whereby the cause of a problem is also the solution? Or is this simply the 2010 version of realpolitik?"

"The growth of Geert Wilders' PVV party raises fewer questions.... Since the local elections in March, the PVV has shown that it is by no means a misunderstood party of ultra-liberals. 'More security, less criminality, less immigration and less Islam,' is how Wilders summed it up on election night."

"Apart from the explicit Islam focus, this formula is also to be found in the VVD program. It is the amalgamation of two tendencies that seemed to work against each other during the election campaign: the dominance of economic issues would, it was argued, push the culture clash agenda of the PVV to the side and attract its voters to the VVD. The election results refute this. It is not an 'either-or' situation -- it is 'as well as': The VVD and the PVV compliment each other much more than they cancel each other out. It is not for nothing that until 2004 Wilders was a member of the VVD."

"Political uncertainty has become the mark of a country which in international comparison seems to be an oasis of stability.  Balkenende was not measured by his successes but was punished for failing to create a coalition -- after three attempts since 2002 -- that would last for the full four years."

"On the other hand Mark Rutte, as leader of the conservative-liberals, understood how to exploit the schizophrenic mixture in the country of satisfaction and trust in institutions on the one hand and fearful unease and mistrust on the other."

"Politicians and pollsters were severely mistaken to almost write off the Wilders phenomenon. For years Wilders has increased his Islamophobic stance, with little regard for the polls.  And recently he began to play the only true defender of the social state (for native Dutch people) and took support away from the Socialists."

"The other parties have a difficult choice to make. Can they go over the heads of a Wilders faction that has almost tripled in size when they try to form a coalition? Or is it now the time to include Wilders in a government and thus show the country how little he has to offer?" 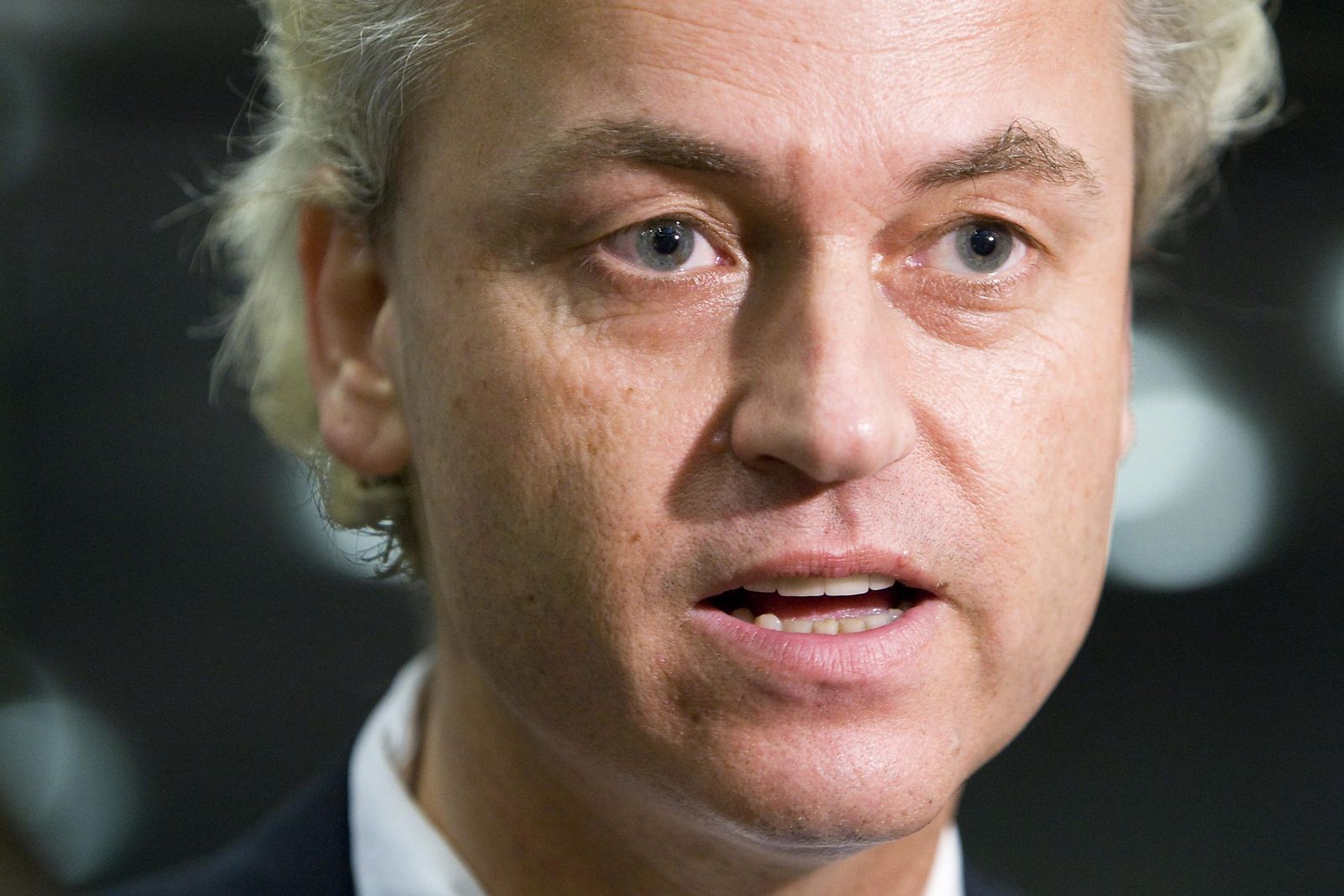