Stability bonds. That is the new moniker given by the European Commission to euro bonds as it moves toward presenting its most definitive proposal yet for the debt pooling measure on Wednesday.

He did so carefully. Chancellor Angela Merkel remains adamantly opposed to euro bonds, worried as she is that Germany would be disproportionately burdened. Instead, she insists that a clear commitment to rigid fiscal discipline, combined with the euro backstop fund, will be enough to calm markets.

"While the prospect of introducing stability bonds could help alleviate the sovereign debt crisis, I am also aware of the sometimes strong opposition against these ideas," Rehn told a conference of Germany's employers' association. With a nod to Merkel's concerns, he added: "Let me be clear with this ... it is clear that any type of euro bonds would have to go in parallel, hand in hand, with a substantially reinforced fiscal surveillance and policy coordination."

Any such plan would also be "balanced by provisions that ensure sustainable public finances and avoid freeriding on the consolidation efforts of other member states," he said.

The head of Germany's central bank, the Bundesbank, also warned against hasty attempts to settle the markets. "We cannot allow thoughts of a deeper union to serve as a pretense to erode the important foundations of our cooperation," he said on Tuesday in Berlin. "But this would be the case if collective responsibility is implemented while establishing strict controls remains a future project."

European integration must be broadened before a model that accommodates euro bonds could work, he said, echoing Merkel's concerns. The chancellor has also warned recently that rushing into European unity could torpedo the union's economic competitiveness.

On Tuesday German commentators explored these concerns. Time is running out, they say.

"What stability instruments haven't EU states invented within the last two years? ... But these haven't helped stabilize the euro zone. Now the European Commission is propagating something new in their option paper: They're calling euro bonds 'stability bonds.' This speaks to the hope that there is still an instrument that might calm the financial markets after the European Financial Stability Facility (EFSF) euro backstop fund has had hardly any effect so far, which makes printing more money seem like the only remaining option."

"Even the loveliest empty words barely conceal what the EU officials are aiming for -- the collectivization of sovereign debts, the common responsibility of all EU members, and the final break of the hollowed out but still standing bailout ban of the Maastricht Treaty.... Every country that can finance itself on the bond markets without problems should also be responsible for the others. In short: Germany should save the rest of the euro zone."

"There are currently too many 'stability instruments' under discussion. There is a danger that, ultimately, the German government will have to choose between the plague and cholera -- or rather euro bonds and further increases to the EFSF. The Brussels proposal will likely generate more momentum than the chancellor would like."

"Politics are closely linked to rhetoric, and that goes for the euro crisis too. European Commission President Jose Manuel Barroso knows this, thus renaming his long-favored euro bonds as 'stability bonds' instead. The name alone suggests that the euro zone, tormented by the euro crisis, would finally find its footing again with collective bonds."

"But word games can't replace fundamental discussions. This coveted stability can't be conjured up with euro bonds. Debts are debts, regardless of whether the 17 member nations are individually responsible for them, or, as Barroso wants, they take them on together. Euro bonds don't guarantee that the trust lost in the euro zone will be won back. It should also be remembered that euro bonds are incompatible with European Union treaties. … The EU could change this, but it would likely take years."

"Thus, it once again becomes clear that the European Commission is trying to justify euro bonds economically while actually following purely political aims. Barroso demands solidarity: Prosperous countries should help out the weaker countries, and all should bear the same debt burden."

"Such a leveling of the financial playing field could make sense in the long term. But first the integration of financial and economic policies must take place. Euro bonds are unsuitable as urgent short-term aid. The currency union must find another way out of the crisis."

"The euro bond is on the agenda again because of a fundamental euro crisis development in recent weeks: The panic on the financial markets reached key countries like France and Austria, which are now also battling interest rate increases of their own. The derogatory differentiation between the deadbeat southern countries and the ostensibly reliable northern countries doesn't work any longer. The euro-zone countries are all sitting in the same boat -- and they should be rowing together."

"The idea of a euro bond is doubly convincing. Investors would no longer be able to pick out individual member states and demand such astronomical interest rates. Additionally, a gigantic market for euro government bonds -- one comparable with that of the US bond market -- would emerge. This enormous liquidity would push interest rates down, as US experience shows."

"But one problem remains. Euro bonds can't be implemented ad hoc. The euro crisis is intensifying too quickly, leaving just one authority to step in -- the European Central Bank. In the coming weeks it must signal that it will buy up unlimited government bonds, otherwise the euro will collapse."

"People in the euro crisis have become accustomed to one constant: What Chancellor Angela Merkel categorically rejects today can still be implemented tomorrow. That makes the euro-bond debate ... so exciting. A 'no' from Berlin doesn't necessarily mean the last word."

"There are many indications that Germany will have to finally give in again and accept one of two solutions: Either increased bond purchases by the ECB or euro bonds. But in exchange, Merkel will exact a price. She wants to use the acute urgency to construct a euro zone that corresponds to her vision.... If Europe allows this new currency union with rigid controls for countries that exceed debt limits, then Merkel will open herself up to things she has so adamantly rejected. But she's begun a dangerous game. It could come to pass that that the currency union she wants to stabilize according to German plans may no longer exist. Then even the best treaty amendments won't help." 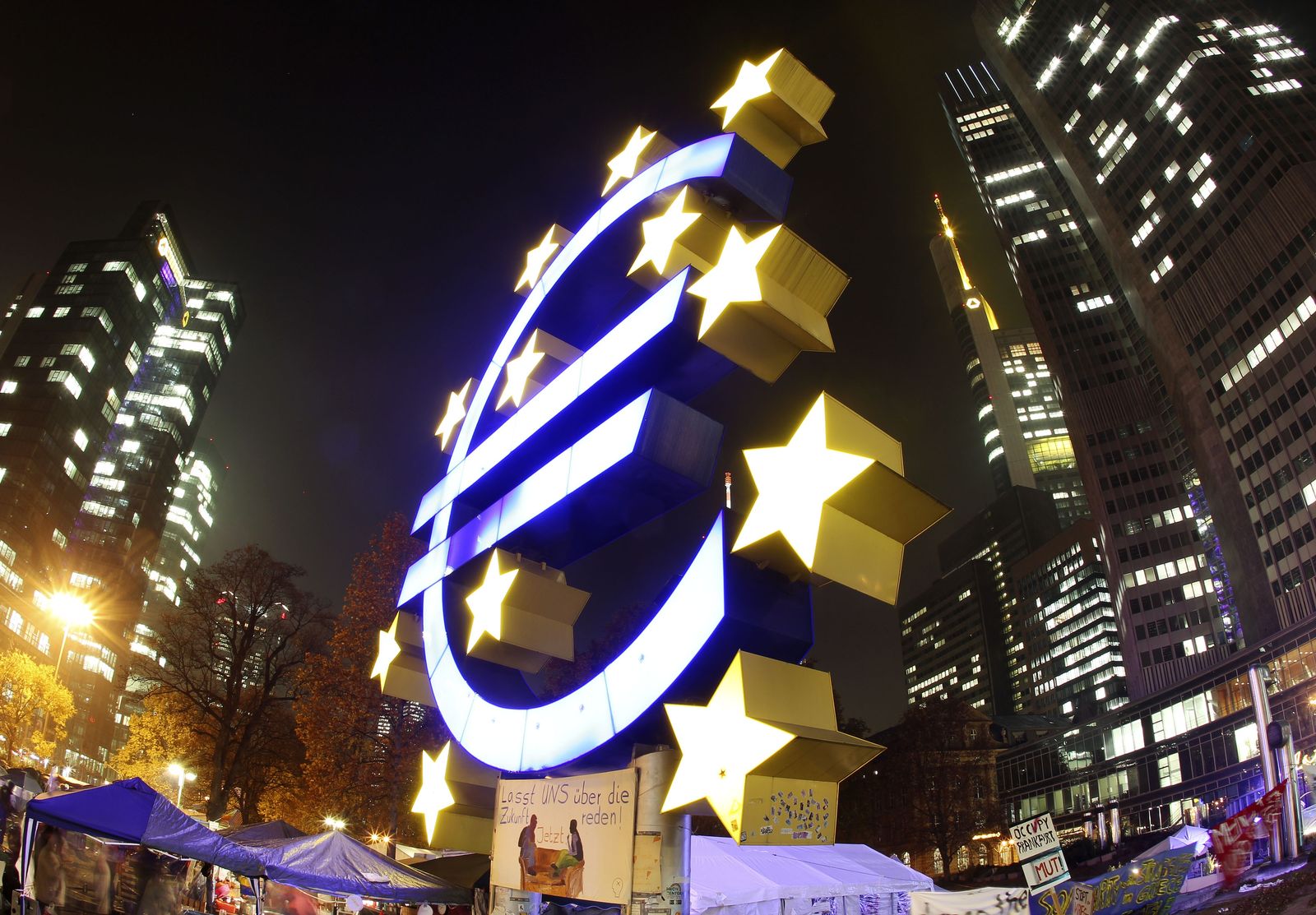 A Euro sculpture in front of the European Central Bank in Frankfurt, Germany.