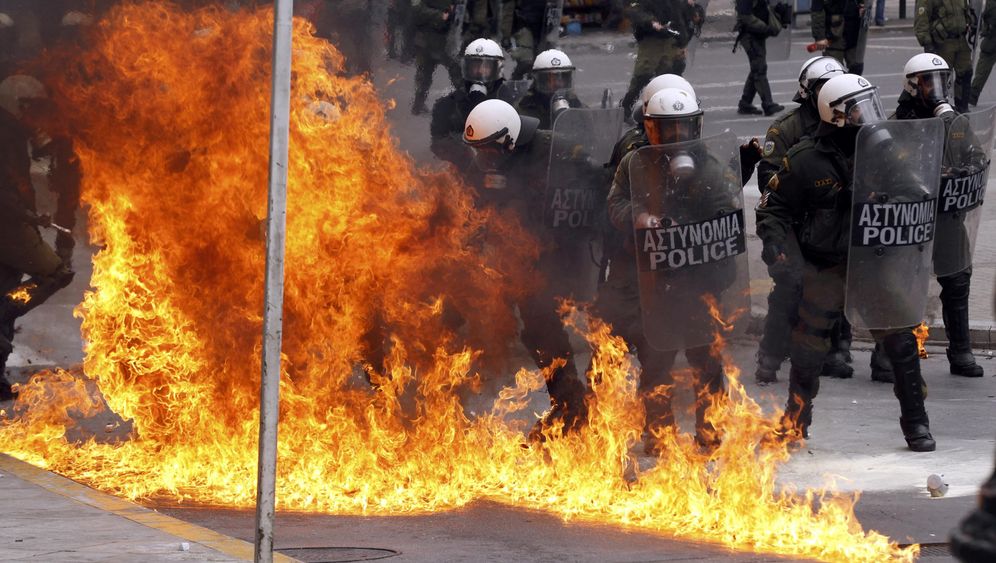 It was supposed to be a breakthrough. But the deal that was reached on Thursday by the Greek government received a lukewarm reception in Brussels. The Gordian knot of the Greek debt crisis remains as intractable as ever.

On Thursday, Greek party leaders had announced that, following weeks of talks and delays, they had finally agreed to accept the stark austerity conditions imposed on them by the troika of the European Commission, European Central Bank and International Monetary Fund. But German Finance Minister Wolfgang Schäuble reacted by saying that the news from Athens was still not enough to trigger the release of the second bailout package for Greece, worth €130 billion ($172 billion).

Similarly, no decisions were made at the five-and-a-half hour Euro Group meeting later on Thursday. On the contrary, Luxembourg Prime Minister Jean-Claude Juncker, the group's president, announced afterwards that the Euro Group would have to meet once again next Wednesday. Greece has until then to fulfill several remaining conditions, including finding a further €325 million in savings.

In addition to passing strict austerity measures, Greece needs to negotiate a debt relief agreement with private creditors worth €100 billion if it is to receive the EU/IMF aid package. If not, the country could default as early as next month, when €14.5 billion in Greek government bonds come due.

Taking to the Streets

Meanwhile, resentment against the troika and the imposed austerity measures is reaching the breaking point in Greece, with the Germans being a target for particular scorn. On Friday, trade unions began a two-day general strike and demonstrators took to the streets of central Athens. Television footage showed protesters fighting running battles with police and throwing Molotov cocktails.

Many observers are losing faith in the idea that Greece can be saved even if the second bailout goes through. With unemployment at 20.9 percent and the economy in its fifth consecutive year of recession, it is unclear how Greece will ever be able to generate growth or begin to pay down its debt.

On Friday, German commentators argue that it is time for EU politicians to face the truth about the situation -- and accept that Greece will either have to default or leave the common currency.

"The Greek misery has no end. This is true in two senses. On the one hand, the way in which the negotiations over the next bailout are dragging on ... feeds doubts that Greece will be rescued -- and whether it even can be rescued."

"The other side of the Greek misery is more tangible. Even though they were never fully implemented, the series of austerity programs have brought the economy to a standstill and forced the people, who are continually being asked to make new sacrificies, onto the streets. ... Greece presents a desolate picture, in terms of its economic structures, competitiveness, social cohesion and political system. In other parts of the world, it would be called a failed state. It is time that the Europeans admit that fact and take the necessary action."

"Whether the resulting conclusion is that Greece can no longer be saved from bankruptcy, or whether it should be persuaded -- or forced -- to leave the euro zone, is ultimately a question of math. Which option will end up being more expensive for Greece and its public and private-sector creditors? No finance minister knows the answer, and no economist can calculate it reliably. This uncertainty is deadly, both for the markets and for countries. It must be ended quickly."

"The EU partners and the Greek government have a baleful fear of the truth. Which is the following: Greece can not actually be saved (with the current approach), not by slashing the minimum wages, and not with cuts in salaries, which are supposed to remain frozen until the country has lowered its unemployment rate from nearly 21 percent to 10 percent. But where will the new jobs come from? After all, there is hardly a major company that wants to invest in Greece at the moment, which also means there is little hope of achieving the planned revenues from the privatization of state-owned assets. Lower wages also mean lower tax revenues and less consumption."

"The Athens savings program is a 15-page wish list. The Greek government can certainly guarantee in writing -- as the troika is requiring -- that it will fulfill the requirements, but nobody knows whether the parties involved will also play a part in the implementation. It is entirely uncertain who will be in power after elections in April."

"But if the country can't be saved by turning the thumb-screws, then what? Then the only alternative is radical debt relief on the part of the major private creditors, the banks and the hedge funds. The European Central Bank would probably also have to write down some of its holdings of Greek debt. Then, Greece would need a Marshall Plan on top of that. All of this is expensive, and progress will not happen overnight. But there are no longer any real alternatives."

"Greece is currently trying to do something impossible: which is to reform the economy in the midst of a deep depression. That simply doesn't work."

"According to estimates, never has an OECD country reduced its structural deficit so dramatically while its actual deficit has only gone down by a fraction of that amount. The Greek economy has shrunk by 12 percent in the light of new cuts every month, investments have halved since 2010 and the unemployment rate has soared to over 20 percent. That situation destroys the foundation for an upturn. In this case, what is needed is a smart mix of reforms and measures to avoid a depression."

"Greek domestic demand is now at the level of 2001. That can no longer be interpreted as a correction of previous excesses. This needs to be urgently stopped -- by putting an end to the endless requirements of the troika."

"It is high time to give the Greeks hope of growth once again. The fact that many reforms are still needed in Greece is no reason to drive the country into complete ruin through disastrous crisis management. That doesn't help the Greeks. And neither does it increase the chances of German taxpayers having to pay less."

"The agreement reached in Athens between the Greek government and the international donors ... has not prompted high hopes on either side. Greece promised what it had to, in order to get the new aid package. And the troika acted as if it -- against its better judgment -- actually believes that the Greek economy can be healed. But the pictures of the demonstrations and the burning German flags show that they didn't reckon with the Greek population. Ultimately, the crucial thing is not the politicians' willingness to carry out reforms … but the will of the people. And the Greeks seem unwilling and unable to accept, for the sake of the stability of the single currency, cuts that go far beyond what we in Germany have ever experienced in terms of austerity measures."

"Even the new, larger aid package will not calm the situation in the over-indebted country. Every few months, there will again be emergency meetings, nocturnal negotiations and supposed breakthroughs. But let's not kid ourselves: It's not possible to really rescue Greece this way. From an economic perspective, the country needs to leave the euro zone, because it is economically too weak and its administrative structures are too underdeveloped to be able to keep up with the others. But in political terms, the would-be rescuers and the Greek government have an excessive fear of such a step. The donors would prefer to close their eyes than take the necessary steps."

"Usually, Greece's doomed struggle with its debt is described as a tragedy. But the spectacle we have witnessed in recent days in Athens was more a farce. Not because one would laugh at the suffering of the Greeks, but because the actors here were using all their theatrical tricks to fool the audience."

"During the poker game with their creditors, the Greeks have been acting as if they had a joker up their sleeve. That joker was the threat of declaring bankruptcy and triggering a panicked chain reaction among investors. ... But that isn't a trump card. The main victims of a disorderly bankruptcy would be the Greeks themselves."

"But the troika has also been deceiving the audience of the Greek drama with numerical trickery that is easy to see through. According to the troika, the intended target of the brutal austerity measures is to reduce Greece's debt over the next eight years from 160 to 120 percent of gross domestic product. The EU and IMF believe that the country could support such a debt burden by itself. But back in 2010, at the beginning of the debt crisis, such a level of debt was already considered unsustainable. ... The question of how Greece is supposed to return to growth despite the harsh austerity measures remains the troika's secret."

"Both sides are lying through their teeth. ... The only way to 'save' Greece is through an orderly national default. Without such a new beginning and a long-term strategy for growth, Athens is lost."