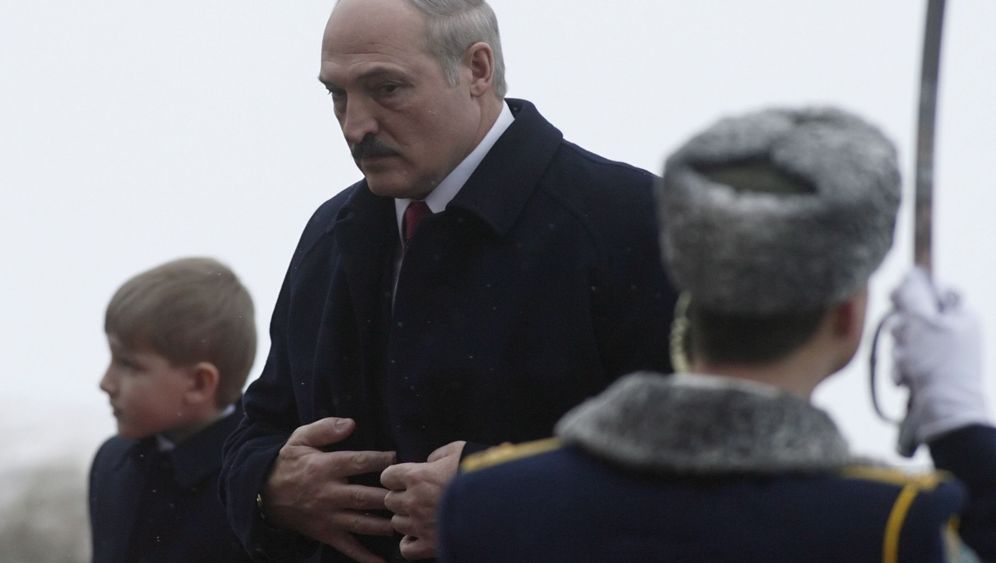 It isn't so long ago that Europe was popular in Minsk and high-level European diplomats could count on a warm reception in the Belarusian capital. Italian Prime Minister Silvio Berlusconi made a courtesy call on the country's autocratic president, Alexander Lukashenko, while Guido Westerwelle was the first German foreign minister in 15 years to visit the country.

Lukashenko nurtured hopes of a rapprochement with Europe: He allowed opposition candidates to participate in the presidential election, even allowing his opponents a little bit of air time on state-owned television. In an article in the Soviet Belarus state newspaper, the European Union's Enlargement Commissioner Stefan Füle was permitted to argue in favor of a "partnership for reforms."

Nothing came of the reforms, however, and the partnership remains on ice. Ambassadors from the US and European Union countries conspicuously rejected the invitation to Lukashenko's inauguration on Friday. In a resolution, the European Parliament has demanded strict sanctions against the country in response to the violent crackdown following the elections in Belarus on Dec. 19. These would include a travel ban on those officials and politicians involved in the repression of Lukashenko's opponents or vote-rigging.

After declaring himself the winner of the election with 79.7 percent of the vote, Lukashenko, who has been in power for 16 years, brutally put down a demonstration by tens of thousands of opposition members. Several presidential candidates were injured and arrested. Andrei Sannikow, leader of the "European Belarus" movement, is still in prison, as is his wife, journalist Irina Khalip. Their three-year-old son Daniil is being looked after by his grandmother.

Lukashenko, meanwhile, wants to make his subjects believe that sinister foreign powers were behind the protests, in a bid to destabilize the country. State television showed images of grenade launchers and Kalashnikov machine guns, apparently smuggled in from Russia to be used to violently overthrow Lukashenko. The main state TV station showed a shed-like building in Minsk that was supposed to be an arms depot. But shortly afterwards neighbors contacted an opposition newspaper and revealed that the scene had been staged.

According to reports from Minsk media that are loyal to the regime, the alleged "Operation Putsch" cost up to $20 million (€15 million). The masterminds behind it are supposedly members of the intelligence services in Berlin and Warsaw. Lukashenko announced that he felt "compelled to reveal that a huge amount of the financing came from Germany and Poland." He warned that "plans for the overthrow of the constitutional order" had been drawn up in these two countries. The Foreign Ministry in Berlin quickly rejected these accusations as meaningless, and Westerwelle summoned the Belarusian ambassador. Meanwhile Poland imposed an entry ban on Lukashenko.

Lukashenko, however, appears unperturbed by the German and Polish moves. After all, it is not the first time the EU has imposed sanctions against him. Brussels only lifted his entry ban in October 2008 as part of the rapprochement at the time. "If Europe and America want to make the same mistake a second time, then God help them," said Lukashenko.

Nevertheless, things are slowly getting uncomfortable for the hardman in Minsk. In the past, Lukashenko pursued a balancing act between Moscow and Brussels. Sometimes he swung more to one side, at other times to the other, always in search of financial assistance and subsidies for his country's weak economy.

"Lukashenko is completely losing his room for external maneuver," writes Alexei Pikulik of the Belarusian Institute for Strategic Studies, which is located in exile in Lithuania. "An 'escape' to the West is impossible for the time being, and so is the chance to use his friendship with Europe to blackmail Russia."

Although Russia had started a smear campaign against Lukashenko in the summer of 2010, it now spies an opportunity to bind its Slavic neighbor closer to Moscow again, both economically and politically. The two countries are currently negotiating the conditions for the supply of Russian oil, which the Belarusian economy depends on. On Thursday, Russian Prime Minister Vladimir Putin promised his Belarusian counterpart discounts worth $4.1 billion (€3 billion) for this year.

Lukashenko can also feel satisfied about the attention he is receiving from a newly acquired ally, which appears to care little about repression and human rights violations in Belarus. Last week, an envoy from China announced in the "House of Friendship" in Minsk that Beijing would invest $5 billion dollars in 20 projects in Belarus. The support from the Asian powerhouse is particularly attractive for Lukashenko. "China never ties its investment to political conditions," says the president. "They accept us as we are."