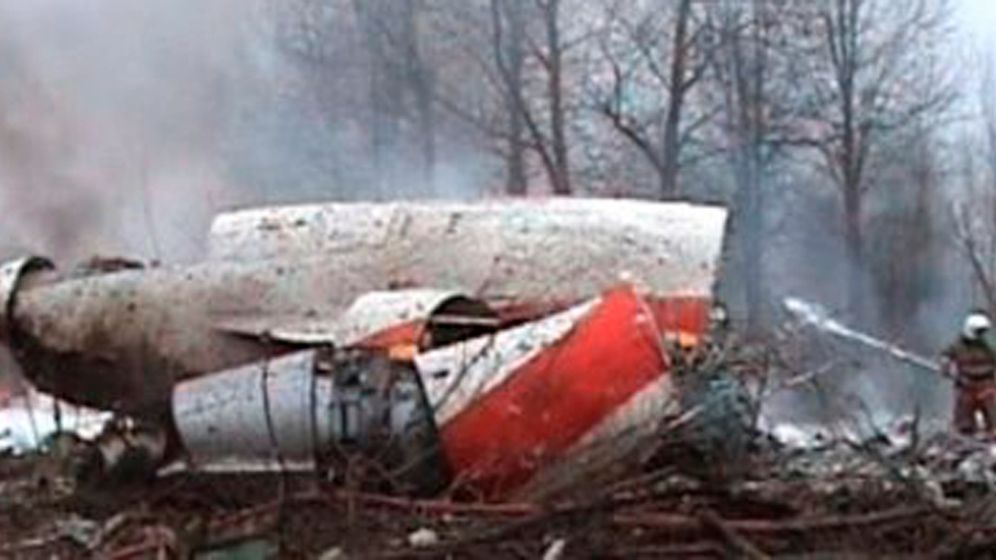 Rescue workers on Saturday combed through the wreckage of a plane crash in Smolensk, Russia that killed Polish President Lech Kacynski and other senior members of the country's government. The plane, a Tupolev-154 jet, apparently hit the treetops in heavy fog and broke apart before reaching the runway. There were no surviviors, according to Polish and Russian officials.

The governor of the Smolensk region, Sergei Antufiyev, told Russian state television: "The Polish president's plane didn't make it to the runway. No one survived the catastrophe."

Among the passengers were Kaczynski, his wife Maria Mackiewicz and other high-ranking representatives of the country. Kaczynski had been accompanied by Army chief of staff Franciszek Gagor, Deputy Foreign Minister Andrzey Kremer, deputy speaker of Poland's parliament, Jerzy Szmajdzinski and Slawomir Skrzypek, president of the national bank NBP, according to reports. Also among the passengers were important members of Kaczynski's staff, including Wladyslaw Stasiak, Aleksander Szczygo, Pawel Wypych and Mariusz Handzlik. Several members of the Polish parliament were also said to be on board.

"The modern world has not seen a drama like this," Polish Prime Minister Donald Tusk said at a brief press conference on Saturday. He added that Russian Prime Minister Vladimir Putin and President Dmitry Medvedev had been the first to express their condolences. Tusk planned to travel to Smolensk to the crash site on Saturday.

'A Political and Human Tragedy for Poland'

In Berlin, German Chancellor Angela Merkel telephoned with Polish Prime Minister Donald Tusk after the accident to express her deepest sympathy and condolences, her spokesperson said. In a statement released to the public by the Chancellery, Merkel said: " It is with dismay and bewilderment that we have learned of the crash of the Polish president's plane. Our thoughts and our sympathies go out to the family of the president as well as the families of the many victims of the plane crash. This is a political and human tragedy for Poland, for our neighbor country."

Merkel called Kaczynski a "valiant European." "I can remember many encounters with him on the European and international level," Merkel said. "In the end, we always found a result. I knew that he dedicated his entire life to the fight for freedom in Poland and in Europe."

"Lech Kaczynski will be missed by Germany," she said. "Germany is mourning today together with all Polish people."

Delegation Was Traveling to Memorial Ceremony

Kaczynski and his delegation were on their way to a memorial ceremony for Polish soldiers murdered by the Russian secret service in Katyn 70 years ago. On Wednesday, Russian Prime Minister Vladimir Putin visited Katyn together with Polish Prime Minister Donald Tusk to honor the murdered Polish officers in a highly symbolic reconciliatory gesture between Moscow and Warsaw, whose relations have been badly strained in recent years.

In April and May of 1940, Stalin ordered the murder of 4,000 Polish military officers, intellectuals, government employees and other "counterrevolutionary elements" in Katyn. Similar massacres took place in Twer and other locations, with more than 20,000 Polish citizens killed in total.

The massacre at Katyn has long been a source of conflict in relations between Russia and Poland. For decades, leaders in Moscow sought to blame the crimes that took place at Katyn on the Germans. It was only after the fall of the Soviet Union that the Russians admitted that the Polish officers' corps had been shot there in 1940 under orders from Stalin. Just before, Soviet troops had marched into Poland under the auspices of the Hitler-Stalin Pact.

According to the New York Times, former Polish President Aleksander Kwasniewski told TVN24: "It is a damned place. It sends shivers down my spine. First the flower of the Second Polish Republic is murdered in the forests around Smolensk, now the intellectual elite of the Third Polish Republic die in this tragic plane crash when approaching Smolensk airport. This is a wound which will be very difficult to heal."

Members of the German government expressed their shock at the news. "I am deeply shocked by the crash and the death of the Polish president," German Chancellor Angela Merkel said on Saturday. She sent her condolences to Polish Prime Minister Donald Tusk, who is reported to have burst into tears upon hearing the news of the crash. "I wish you, all the families of the dead and all Poles comfort and strength," Merkel said. "The whole of Germany is standing in sympathy and solidarity by your side and by the side of Poland in this difficult time."

"We are shocked and full of grief," said German Foreign Minister Guido Westerwelle, who has put a focus on Polish-German relations since taking office and who knew Kaczynski and several of the other victims personally. "The whole German nation mourns with our Polish neighbors. We want to convey to the Polish people that we are at your side."

Investigative Commission to Be Set Up

The plane used by the president on Saturday, a Tupolev-154 which was at least 20 years old, had taken off from Warsaw. It crashed into trees during its approach to Smolensk and burst into flames. A Polish government spokesperson said there had been fog in the area. According to press reports, the pilots of the plane attempted to land four times.

The Russian general prosecutor said it was investigating foggy weather conditions, a technical defect or human error as possible causes for the deadly crash. Russian President Dmitry Medvedev said he would set up an investigative commission to be headed by Prime Minister Putin.

Earlier reports stated that 132 people died in the crash, but the Polish Foreign Ministry is now reporting that 96 people died, of whom 88 were part of the Polish delegation.

In Warsaw, people began laying flowers and candles in front of the presidential palace in remembrance of Kaczynski. The crash is also likely to rekindle a long-simmering debate over the country's aged government aircraft fleet. The Tupolev plane had been designed by the Russians in the 1960s and officials had long sought to upgrade the fleet.

According to the Associated Press, the Aviation Safety Network has reported that there have been 66 crashes involving Tu-154 jets, including six in the past five years. Russian flag carrier airline Aeroflot recently withdrew the aircraft from its fleet.

After surviving a helicopter crash in 2003, former Polish Prime Minister Leszek Miller said he predicted a disaster like this, according to the New York Times. "I once said that we will one day meet in a funeral procession, and that is when we will take the decision to replace the aircraft fleet."

Sixty-year-old Kaczynski had served as president of Poland since 2005. Together with his brother Jaroslaw, he founded the nationalist conservative Law and Justice party (PiS). He promoted policies that fostered a stronger state and emphasized nationalist values. From 2000 to 2001, he had served as justice minister. After his election as head of state, some dubbed Poland the "twin state" because twin brother Jaroslaw served as prime minister from 2006 to 2007.

The next presidential election in Poland had been slated for this fall, but the vote is now expected to take place sooner. According to the Polish constitution, Speaker of Parliament Bronislaw Komorowski will assume the office of president until a replacement for Kaczynski can be elected.