SPIEGEL: You publicly rejoiced over Alexis Tsipras' election victory in Greece. What do you think the chances are that the European Union and Athens will agree on a path to resolve the crisis?

Piketty: The way Europe behaved in the crisis was nothing short of disastrous. Five years ago, the United States and Europe had approximately the same unemployment rate and level of public debt. But now, five years later, it's a different story: Unemployment has exploded here in Europe, while it has declined in the United States. Our economic output remains below the 2007 level. It has declined by up to 10 percent in Spain and Italy, and by 25 percent in Greece.

SPIEGEL: The new leftist government in Athens hasn't exactly gotten off to an impressive start. Do you seriously believe that Prime Minister Tsipras can revive the Greek economy?

Piketty: Greece alone won't be able to do anything. It has to come from France, Germany and Brussels. The International Monetary Fund (IMF) already admitted three years ago thatthe austerity policies had been taken too far. The fact that the affected countries were forced to reduce their deficit in much too short a time had a terrible impact on growth. We Europeans, poorly organized as we are, have used our impenetrable political instruments to turn the financial crisis, which began in the United States, into a debt crisis. This has tragically turned into a crisis of confidence across Europe.

SPIEGEL: European governments have tried to avert the crisis by implementing numerous reforms. What do mean when you refer to impenetrable political instruments?

Piketty, 43, is a shooting star among economists. The Frenchman's book, "Capital in the Twenty-First Century," about the widening divide between rich and poor, has sold 1.5 million copies worldwide. Piketty is a professor at the École d'Économie de Paris. He cites "personal and intellectual reasons" for not wanting to teach in the United States and sees himself as part of the tradition of French social scientists.

Piketty: We may have a common currency for 19 countries, but each of these countries has a different tax system, and fiscal policy was never harmonized in Europe. It can't work. In creating the euro zone, we have created a monster. Before there was a common currency, the countries could simply devalue their currencies to become more competitive. As a member of the euro zone, Greece was barred from using this established and effective concept.

SPIEGEL: You're sounding a little like Alexis Tsipras, who argues that because others are at fault, Greece doesn't have to pay back its own debts.

Piketty: I am neither a member of Syriza nor do I support the party. I am merely trying to analyze the situation in which we find ourselves. And it has become clear that countries cannot reduce their deficits unless the economy grows. It simply doesn't work. We mustn't forget that neither Germany nor France, which were both deeply in debt in 1945, ever fully repaid those debts. Yet precisely these two countries are now telling the Southern Europeans that they have to repay their debts down to the euro. It's historic amnesia! But with dire consequences.

SPIEGEL: So others should now pay for the decades of mismanagement by governments in Athens?

Piketty: It's time for us to think about the young generation of Europeans. For many of them, it is extremely difficult to find work at all. Should we tell them: "Sorry, but your parents and grandparents are the reason you can't find a job?" Do we really want a European model of cross-generational collective punishment? It is this egotism motivated by nationalism that disconcerts me more than anything else today.

SPIEGEL: It doesn't sound as if you are a fan of the Stability Pact, the agreement implemented to force euro-zone countries to improve fiscal discipline.

Piketty: The pact is a true catastrophe. Setting fixed deficit rules for the future cannot work. You can't solve debt problems with automatic rules that are always applied in the same way, regardless of differences in economic conditions.

SPIEGEL: People in Germany tend to be critical of the fact that countries are not abiding by the pact. France, for example, has rarely stuck to the agreed rules.

Piketty: Everyone is dissatisfied, because this entire system of negotiations between the governments and the Brussels bureaucracy doesn't work. Countries like Germany complain because we are not abiding by the deficit rules. But the French aren't amused by the requirements being imposed by Brussels. We Europeans are in a bad situation, and minor structural reforms, which we hope will provide us with a little growth, won't do anything to change that.

Piketty: We need to invest more money in training our young people, and in innovation and research. That should be the most important goal of an initiative to promote European growth. It isn't normal that 90 percent of the world's top universities are in the United States and our best minds go overseas. The Americans invest 3 percent of their GDP in their universities, while it's more like 1 percent here. That's the main reason why America is growing so much faster than Europe.

SPIEGEL: The United States has a uniform fiscal policy. What conclusions can be drawn from that?

Piketty: We need a fiscal union and a harmonization of budgets. We need a common debt repayment fund for the euro zone, like the one proposed by the German Council of Economic Experts, for example. Each country would remain responsible for repaying its portion of the total debt. In other words, the Germans would not have to pay off the Italians' old debts, and vice-versa. But there would be a common interest rate for euro bonds, which would be used to refinance the debt.

SPIEGEL: But that would create the risk of a big debt coalition. Who determines how much debt is allowed?

Piketty: We need a communitization of debts, but it has to be democratically legitimized. I propose a European parliament for the euro zone that would consist of members of the national parliaments. Each country would be represented in this parliament in proportion to its population size. In other words, Germany, with its 80 million inhabitants, would have the largest number of members. These politicians would then vote democratically on how high the deficit could be in the euro zone.

SPIEGEL: And the Germany lawmakers, with their aversion for large deficits, would be routinely outvoted by their more free-spending colleagues.

Piketty: I do, in fact, assume that this type of parliament would have saved less in recent years, and would have instead spent more on growth and fighting unemployment. It would have been good for us all. Germans shouldn't be afraid of democracy. If we have a common currency, at some point we have to accept that we also spend money together.

SPIEGEL: How do you intend to ensure that a country like Greece doesn't just return to living beyond its means?

Piketty: Greece would be subject to greater fiscal discipline. The amount of debt would be fixed by a European parliament in which Greek members would only play a subordinate role. In the long run, we need a fiscal union in Europe that is democratically legitimized.

SPIEGEL: Do you expect France to take the initiative? The country seems to be focused more on itself these days.

Piketty: That's true enough! I believe that many of the ideas that could push us forward come from Germany. I deeply distrust the French way of thinking in national categories. Our elites, regardless of their political leanings, are incapable of thinking in truly European terms. Germany is different in that respect.

Piketty: The truth is that France hasn't really played a role since the crisis began. We are afraid -- of the markets and of democracy. But fear doesn't get us anywhere. France has internalized Germany's dominant role to such an extent that it no longer feels capable of doing anything.

SPIEGEL: Why does President François Hollande seem so weak?

Piketty: We always have the same types of people at the top here, and it doesn't do our country any good. There is no renewal anywhere. Hollande still feels traumatized by the referendum over the European constitutional treaty in 2005. He fought hard for the treaty, but the French rejected it. It would be good for us and for Europe if he would slowly get over it.

SPIEGEL: The draft treaty would have shifted some responsibilities from European member states to Brussels, but it was scuttled by voters in France and the Netherlands. What should Hollande tackle now?

Piketty: I believe that we need to reform our country to a far greater extent than the government currently intends to. It's critical that we simplify our complicated social security system. But what happens instead? With each new law, the government tries to make it even more complicated.

SPIEGEL: What exactly are you referring to?

Piketty: Immediately after taking office, the new government overturned a measure adopted by the previous government to reduce non-wage labor costs, only to reintroduce it under a different name a year and a half later. That's crazy. Costs to employers are twice as high in France as they are in Germany. But instead of addressing truly important issues, Hollande introduces a 75-percent tax on wealth that's completely ineffective -- which is why it too has been scrapped. Everything boils down to symbolic policies -- but the wrong ones.

SPIEGEL: How could Hollande and Merkel inspire voters to support more Europe?

Piketty: They need to explain to voters, for example, that even Germany and France can no longer manage to efficiently tax multinational companies, because the companies are playing countries off against each other. To this day, many major corporations from the United States and Europe pay less in taxes than small European companies. A common corporate tax for the euro zone, which would be determined by the new euro-zone parliament, would be helpful and would certainly be popular among voters.

Piketty: No matter what you think of Syriza's election victory, it could serve as a shock therapy of sorts for those in power. Suddenly they'll realize that what they've been doing isn't working, and that they have to take a different approach. But a leftist party like Syriza or Spain's Podemos isn't nearly as dangerous as the extreme right. The National Front here in France is more popular than ever at the moment. That's why it's so dangerous for the established parties to continue fueling these nationalists. Constantly berating the lazy Greeks or Portuguese is irresponsible.

SPIEGEL: Mr. Piketty, we thank you for this interview. 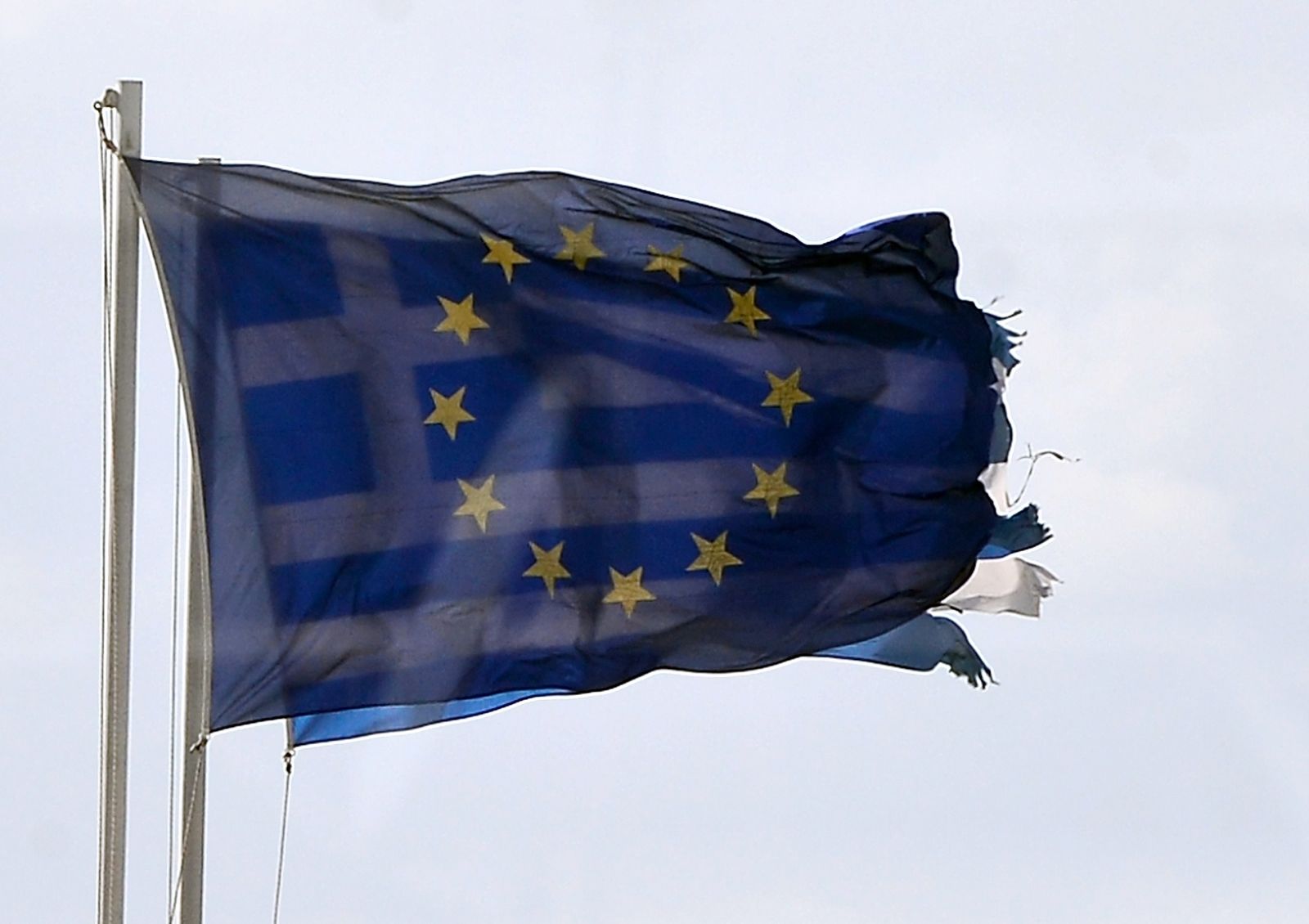