Nora* was only one year old when her fate was decided. "My father promised my grandmother that my marriage would be arranged," says the young woman from the southern English city of Luton. Her parents didn't even like the groom. 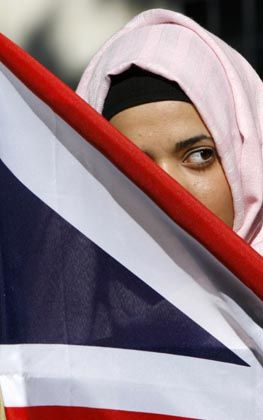 A young woman in a headscarf stands behind a British flag.

In fact, as Nora puts it, "No one had the courage to fight for me." And, so, when she was still a teenager, Nora's parents took her to Pakistan and forced her to marry a man she didn't love. Her father wept during the wedding ceremony but he kept his promise to her grandmother despite the misery caused to his young daughter.

Nora's case and many forced marriages like it has been attracting mounting public attention in Britain. Sociologist Nazia Khanum produced a 90-page report about her hometown of Luton. It took her a full year -- and much longer than she had predicted -- to gain access to the subjects of her study. "I first had to win their trust," Khanum told SPIEGEL ONLINE. When she published it recently she could be sure of maximum attention because it came shortly after the minister responsible for child safety, Kevin Brennan, had told a parliamentary committee that the problem of forced marriage was far greater than previously thought.

Take, for example, the northern English city of Bradford. The majority of the city's population of 500,000 is Muslim. Brennan shocked his fellow MPs when he reported that 33 Bradford children under 16 of age have disappeared without trace. He wasn't sure if the police in Bradford were even looking for the children.

According to Brennan's report, the statistics look similar in an additional 14 communities with a high percentage of immigrants. All told, hundreds of children have disappeared from the school registers in Great Britain -- whereabouts unknown.

A Question of National Identity?

The figures have triggered a public debate about religion, archaic family traditions and British identity. The government now estimates that 3,000 forced marriages take place in Britain per year.

Even Khanum doubts these numbers. In Luton alone, each year sees 300 calls to an emergency telephone line for victims of forced marriages. "We're dealing with something here that happens in secrecy," Khanum says. She estimates that there could be about 4,000 cases nationwide each year of children and young adults who are forced to marry and taken out of the country, both against their will.

The sociologist has found girls living like prisoners in their own families. Even girls who do extremely well in school and are preparing for university -- are forced into marriage, some at 16 or younger. Khanum has examples of children who were promised enticing vacations in the countres their families came from. And then, right after they arrive, they are suddenly told that there will be no trip back because the groom is already waiting.

According to Khanum, the girls are usually cowed into submission by threats. They are warned that if they refuse to wed their arranged partner, the dishonor will force her parents to divorce, for example. Or that the mother will commit suicide. They are bribed with gifts and penalized with rape. Moreover, not all of the disappearing children are girls. In fact, 15 percent of all cases concern young boys forced into marriage.

Khanum also heard of one case in which the family of a severely disabled boy obtained a bride for him from abroad. The young girl was shocked when she met her husband for the first time. "Her in-laws used unimaginable violence to force her to consummate the marriage," Khanum says. The young woman succeeded, however, in escaping to a woman's home.

'I Only Wailed, Even in the Wedding Video'

Even when the women manage to escape from the grip of the families, fear remains. Emine,* a student, is in hiding in Luton. She flew with her parents to Pakistan for a vacation. Once there, her parents forced her to marry a man who only married her so he could get legal residency in Great Britain. "I just cried, even in the wedding video," says Emine. "But no one cared."

After the wedding, Emine's relatives made it clear to her that she was her husband's subject. "I had to do whatever he told me to," Emine says. She returned to England with him after three years and left him. Her ex-husband came to terms with it, but not her parents or brother. They have threatened to kill her because she has brought "shame" on the family. Emine is dependent on an association in Luton that helps women. She is an outsider in her old circle of friends because she refused to obey her parents.

The large number of victims and their testimony have fueled a debate -- originally prompted by the terrorist attacks of July 2005 -- about the values of British Muslims and of British society. Some 1.6 million Muslims live in Britain, which represents about 3 percent of the population. That seems like a small figure at first glance, but Muslims have on average significantly more children than other groups. In many parts of London and in the old industrial cities of northern England, Muslims form a rapidly growing minority. In some places, they will soon be in the majority.

In the past, the British state has tried to keep out of issues affecting ethnic minorities. Immigrants from the empire's former colonies worked in the low-wage sector -- and demanded little more. The United Kingdom was considered the home of multiculturalism. You didn't have to speak English to get by. Many official forms are available not only in English, but in Arabic, Urdu and Bengali as well.

The state also kept out of religious questions, allowing radicals to redefine archaic practices, such as wife-beating, as an expression of cultural identity. Until 2001, Islamic hatemongers were allowed to invoke holy war.

After the terrorist attacks of 2005 the British government started demanding that immigrants learn English and commit themselves to British values. But as recently as six weeks ago, Archbishop Rowan Williams, the head of the Anglican Christians, was openly pondering the incorporation of parts of Sharia into the British legal system.

Last fall, the BBC scored a quota hit with the show "Arrange Me a Marriage" in which British singles looked for their dream partners with the help of an Asian matchmaker. Arranged marriage, a common practice in immigrant families, was suddenly fashionable. The scandal of the missing children is likely to put an end to this trend. Even though the vast majority of arranged couples are formed voluntarily, the practice is falling into disrepute.

The old English imperative that the state keep out of people's private lives is losing force and, with it, the policy of non-intervention in the affairs of the former colonies in Asia and Africa. The parliament's domestic affairs committee is demanding that British authorities try to locate the vanished teenagers.

Parliament's first step will be to summon employees of the British embassy in Pakistan to answer questions. Demands for heightened control of the religious community are getting louder, along with calls for an end to the respect of religious sensitivities. Muslim representatives, however, like to recall that forced marriage is also practiced in other cultures in which the father plays a dominant role in the family.

The East London borough of Tower Hamlets has the highest number of arranged marriages each year. The borough encompasses a large area east of the Tower of London, including famous Brick Lane with its Asian restaurants and discos. Sixteen girls are estimated to be missing from here at the moment. Tony Finnegan, speaker of the borough's administration, confirms the figure. But he told SPIEGEL ONLINE: "Children can be missing for many reasons. We take forced marriages seriously, but we don't believe that it has anything to do with the children's disappearances."

Khanum can't get over this position: "If the community refuses to recognize the problem, it won't do anything to change it. We must finally expose these human rights violations."

Nora, on the other hand, has regular contact with her parents again. "Sometimes I hate them, but this makes me feel guilty," says the young woman. "If I had grown up in another culture, my parents would never have been forced to do such things to me."

Nora has returned to Luton, together with her husband. She doesn't want to be his wife, but she won't consider divorce. Obedience takes priority.

*Names have been changed