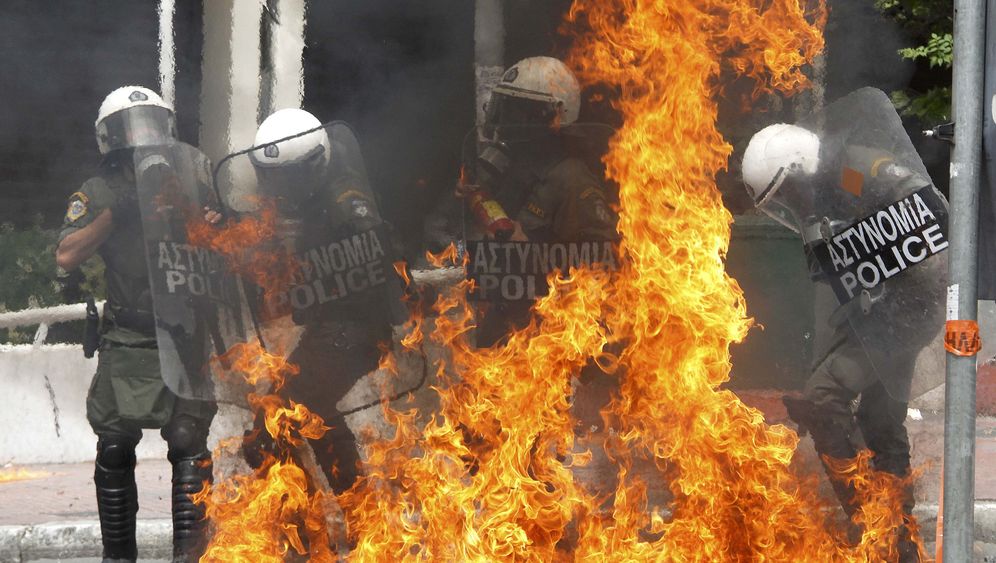 Three people died in a fire in Athens as riots against the severe austerity measures announced by the Greek government at the behest of the International Monetary Fund escalated on Wednesday.

The three died in a bank that went up in flames during street protests against the harsh spending cuts and tax hikes aimed at saving the indebted country from bankruptcy.

Firefighters found the bodies in a Marfin Bank branch on the route of a march in Athens city center. An estimated 100,000 people took to streets during nationwide strikes to protest the conditions imposed for the bailout loans from the IMF and other euro-zone countries.

At least two buildings were set on fire, and masked youths hurled petrol bombs and stones at the police and broke shop windows. Some of the crowd attempted to break through a riot police cordon surrounding parliament and chased away guards at the Tomb on the Unknown Solider in front of the building.

It is the worst violence since the Socialist government came to power in October. Anger has mounted against Prime Minister Georgios Papandreou's government after it announced cuts in salaries and pensions for public workers and another round of tax increases on Sunday.

'No Surrender Without a Fight'

The violence came amid a 24-hour general strike that grounded all flights in and out of the country, shut down ports, schools and government offices, and left hospitals with only skeleton staffs.

Greek labor unions have conceded that the government has to slash spending and increase taxes, but they argue that low-income Greeks are bearing the brunt of the measures. "These people are losing their rights, they are losing their future," Yiannis Panagopolous of the GSEE union told the Associated Press. "The country cannot surrender without a fight."

The rioting and three deaths on Wednesday have reinforced concerns that the Greek government will not be able to deliver on its commitments to cut the public deficit in exchange for the bailout.

In an interview published on Wednesday in the French Le Parisien newspaper, IMF head Dominique Strauss-Kahn said he understood the Greek population's anger but insisted that, without the measures, "the situation would be infinitely more serious."