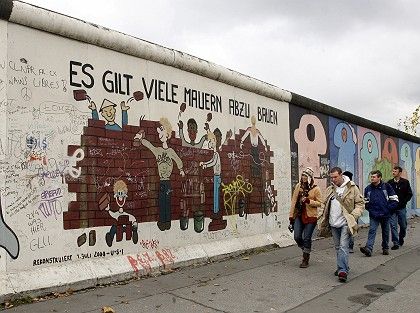 The Berlin Wall: a potent symbol of the Cold War

1945: The Allies agree in Potsdam to the fundamental conditions of the occupation of Germany. American nuclear bombs destroy Hiroshima and Nagasaki.

1947: The Truman Doctrine: The US offers assistance to countries threatened by communism -- especially Greece and Turkey. US Secretary of State George C. Marshall announces a massive aid program for the reconstruction of World War II-torn Europe that will become known as the Marshall Plan.

1948: The Communists take power in Czechoslovakia.

1948: The Soviet blockade of West Berlin begins on June 24. Cut off from the outside world, provisions are delivered to the isolated city by the Americans in the Berlin Air Bridge action. This is the first major Berlin crisis during the Cold War. On May 12, 1949, Stalin lifts the blockade.

1949: On May 23, the Federal Republic of Germany is established. Not long later, on Oct. 7, the communist German Democratic Republic (GDR) is founded.

1949: On August 29, the Soviets detonate their first atomic bomb.

1949: After winning the country's civil war, the Communist Party under Mao Zedong establish the People's Republic of China.

1950-1953: The Korean War: After North Korea attacks South Korea, UN troops led by the United States invade the country. China and the Soviet Union back North Korea. The cease-fire leaves the two countries with the pre-war status quo.

1952: Soviet leader Joseph Stalin offers to hold negotiations on the reunification of Germany on the condition that a united Germany remain neutral. With the support of the West German parliament, the Western allied powers reject the offer.

1955: The Federal Republic of Germany joins NATO and forms the Bundeswehr, the first Germany army to exist after Hitler's fall.

1956: The Hungarian uprising takes place, starting on Oct. 20, but it is ultimately crushed by the Russians.

1961: The construction of the Berlin Wall begins on August 13.

1962: The Cuba crisis: After the Soviets position nuclear war heads in Cuba, the United States threatens war. The world is on the verge of nuclear war for days.

1963: The US, Great Britain and the Soviet Union agree to suspend surface and underwater tests of nuclear weapons.

1965: The first US combat forces land in South Vietnam. More than 2 million people will perish during the Vietnam War -- mostly civilians. The US withdraws its troops in 1973. Two years later the communist north conquers the southern part of the country.

1968: Troops from the Warsaw Pact, an organization of communist states in Central and Eastern Europe, stamp out the Prague Spring uprising.

1969: Negotiations between the United Nations and the Soviet Union begin on the reduction of strategic nuclear weapons. The talks end with several treaties in 1979, but the arms race continues unabated.

1970: The so-called Ostpolitik, a policy of rapprochement with the Eastern bloc championed by German Chancellor Willy Brandt, begins. His policy of "change through conciliation" bears its first fruits: The Germans and Russians agree to a treaty that renounces the use of force.

1979: The NATO Double-Track Decision is approved, enabling the US to station 572 "Pershing II" nuclear war heads in Western Europe if the negotiations with the Soviets over the dismantling of SS-20 midrange missiles fail. The deployment begins in 1983.

1980: Following the Soviet invasion of Afghanistan in 1979, the US imposes sanctions on the Russians and boycotts the Moscow Olympic Games.

1983: US President Ronald Reagan announces the development of a world-wide "Star Wars" missile defense system with his Strategic Defense Initiative.

1987: Gorbachev and Reagan agree to eliminate all land-based intermediate-range missiles.

1991: The Warsaw Pact is dissolved. Gorbachev resigns and the Soviet Union disappears from the map.