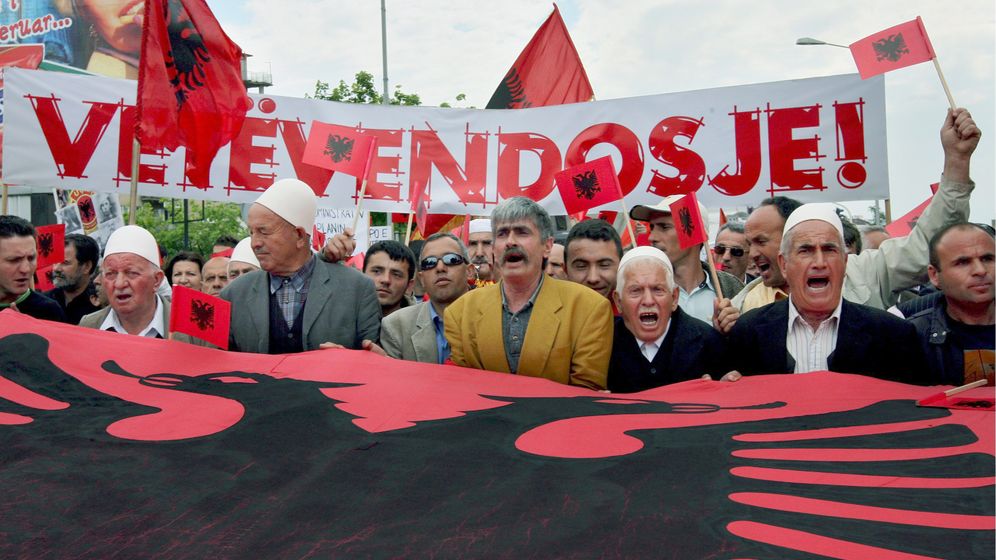 Albin Kurti has turned the pockets of his jeans inside out, and he is holding a red balloon by a string. "Kosovo," Kurti shouts into the microphone, "is the poorest country in Europe." He raises his voice, which is already hoarse: "But our politicians are rich. The higher the unemployment in the general population, the bigger their cars and the fatter their bank accounts." He punctures the balloon.

It's a hot day, and Kurti, 36, is wearing a white shirt as he stands on a pedestal in the middle of a crowd. His stage is downtown Pristina, with its hastily built postwar buildings, the mirrored tower of the government headquarters building and the nondescript concrete structure that houses the local United Nations office. The protesters' banners read: "Albin, stop the thieves" -- a reference to Prime Minister Hashim Thaçi and his administration. A police officer who is handing out water bottles estimates that there are about 800 protesters.

Later members of Kurti's party, Vetevendosje!, will clear the square, collect the empty water bottles and thank the policeman. It is merely a gesture, but it symbolizes what Kurti and his supporters advocate: personal responsibility. Vetevendosje means "self-determination" in Albanian.

The movement, which became a party only a year ago, suddenly established itself as Kosovo's third-strongest political force in the December parliamentary election. The name with its exclamation mark is more than just a party platform in a country that has been dominated by foreign powers for so long. And Kurti's speeches are more than just polemics. They describe reality in this tiny region in the middle of the war-ravaged Balkans, where various forces are continually testing their strength and influence at the expense of the population.

"Kosova," says Kurti, using the Albanian word for the former Serbian province, "may be formally independent, but it is by no means sovereign."

Americans Are Running the Show

Belgrade has secured its influence in the predominantly ethnic Serbian north, where teachers, police officers and doctors are still on the salary lists of Serbian ministries. This is one of the reasons the NATO-led Kosovo Force (KFOR) is currently monitoring the border, where images of violent clashes between Kosovo Albanians and Serbs are still fresh in people's minds.

The Americans are running the show in the capital Pristina. The US Embassy there is in the process of expanding its territory, which already resembles a small city district.

Meanwhile, the international community, represented in countless organizations, is maneuvering around the question of Kosovo's sovereignty. The European Union, for example, is charged with establishing the rule of law in Kosovo. The crux of the matter is that the EU's largest foreign policy mission, EULEX, with its 3,200 employees, is required to maintain a neutral position on the question of Kosovo's status. Five of the EU's 27 members have not recognized Kosovo, partly out of fear of independence movements among their own ethnic minorities. At the same time, it is precisely these EU representatives who are charged with the task of laying the groundwork for creating the constitution of the independent Republic of Kosovo.

What makes things so complicated in Kosovo is the clash between the chaos of the Balkans and seemingly absurd international ambitions. Kurti's message strikes a chord with Kosovars, who are tired of constantly being badgered by others. Kurti has made self-determination for Kosovo his cause.

The word Vetevendosje! is painted in red stenciled letters on building walls and contrasts sharply with the white stripes on pedestrian crosswalks. It is also painted in thick letters, visible from far away, on the face of former US President Bill Clinton on the city's Clinton Boulevard, with the words "Jo negociata" (no negotiations) written below. The reference to negotiations applies to the contested north and, indeed, all of Kosovo, which Serbia still views as its own territory.

Because Kurti not only loudly proclaims this view, but is also a gifted speaker, he has become anathema to all those who attempt to control the fate of Europe's newest state. Those in power in Pristina refer to Vetevendosje as a cancerous growth, and to Kurti as a radical.

"When the extreme becomes normalized, the normal appears to be extreme," says Kurti. He is sitting at a table at his party headquarters, with photos of the protest glued to pieces of cardboard behind him. The pictures show people demonstrating and overturned cars.

Kurti has a round and full face, with a defiant, almost fretful looking mouth. The enfant terrible of Kosovar politics really has a boyish face.

"The only thing that didn't impress me about him was his hair," William Walker, the envoy of the Organization for Security and Co-operation in Europe (OSCE), said in 1998 in reference to Kurti, who was 23 at the time and the leader of the student protests in Pristina. Kurti's boyish face was framed in wild-looking curls, and he listened to U2 and quoted the gloomy poetry of Sylvia Plath. At the time, Albanian militias had taken up arms against Serbia's despotic rule. Kurti and his fellow Kosovo Albanian students marched in the streets with banners that read: "Hello Europe, where are you?"

"Albin Kurti will soon be playing a very important role in politics here. Either he'll be prime minister -- or he'll be killed," says a senior representative of the Europe that Kurti and his fellow protesters once longed for.

'The US Colonial Power'

The circumstances have changed in the meantime. Nowadays Kurti quotes Winston Churchill instead of Sylvia Plath, and he no longer yearns for Europe's support. His country, says Kurti, has gone from being tortured and defiled as Serbia's political prisoner to a patient of the international community -- one that is underage and unable to decide its own fate. "We have traded the prison for the hospital," he says.

Kurti, an eloquent speaker who can switch readily into fluent English, is taking a stance against the "internationals," namely the UN and the EU, while insisting that Kosovo's politicians have relinquished all sense of responsibility. He calls Prime Minister Thaçi a "thief who is stealing from his own people," and says that Thaçi enjoys the protection of the "US colonial power," because he is "Washington's vicarious agent." His charges against the international community are no less harsh. The UN, he says, does little more than eat up its own funds in Kosovo, which it then describes as "nation-building." Some 3,600 non-governmental organizations are registered in a territory about the size of Jamaica.

Kurti's rage is making itself felt. He gives speeches at home in Kosovo, in London and in Oslo -- and more and more people are listening to him.

Some 77 countries have already recognized Kosovo since it declared itself an independent republic in 2008. The United States was one of the first.

For at least part of the world, the most pressing question is no longer that of the country's status, but of its condition. What is happening in Kosovo? And who exactly is running the country?

Puppets Acting in Their Own Interests

Thaçi's coalition government is weakened, now that the prime minister, a former commander of the Kosovo Liberation Army (KLA), has been accused of having rigged the last parliamentary election. A European Council report also alleges that he was involved in trafficking organs from Serbian prisoners of war. Thaçi denies both charges. His former transportation minister and other close confidants are being investigated for corruption. The editor-in-chief of the largest newspaper in Kosovo, Koha Ditore, isn't the only one who believes that the only reason Thaçi is still governing the country is that the United States is protecting him.

"Governing?" Kurti asks, sharply raising his eyebrows. "Our politicians are nothing more than businesspeople acting in their own interest." But most of all, he says, they are puppets.

There are photos of the US ambassador to Kosovo, Christopher Dell, sitting on the stage in the parliament building during the February presidential election and sending text messages to his preferred candidate, the wealthy developer Behgjet Pacolli, giving him instructions on what to do to secure a majority. When Pacolli's election was ruled unconstitutional, it was Dell who proposed a politically inexperienced police chief as a consensus candidate. Atifete Jahjaga, 36, is now the first female president of Kosovo, as well as the youngest. Little has been heard from her since her inauguration, however. Dell, on the other hand, had already been dubbed "Zeus" before her election.

Failing to Live Up to Expectations

Kurti and the growing number of Vetevendosje supporters complain that the international presence is stifling development in Kosovo. A senior EU adviser says self-critically: "It's true. There are too many of us. This is a small country, and not everything we are doing for it is good." The average monthly income in Kosovo is €200 ($284), while a UN official earns 40 times as much.

According to one much-repeated anecdote, an Indian UN police officer had an Albanian farmer arrested because he was driving his cow with a stick. The woman in charge of the UN Development Programme in Kosovo says she understands the resentment against foreigners. The divide is enormous and the results, she says, are not always visible. "Nevertheless," she adds, "it's important that we are here."

But it is precisely this that Kurti questions. His success is partly the result of the international community not having lived up to expectations.

The border region in the north remains a lawless area where EULEX officials are powerless. Their way of dealing with the election farce in December was simply to call upon Thaçi not to include in his administration any individuals who are under investigation.

Although the EU has been involved in Kosovo since 2008 through its EULEX mission, corruption has increased in the parties and in parliament, according to the anti-corruption organization Transparency International. And with unemployment at 50 percent, it is a cruel irony that Kosovo uses the country code for Monaco, the tax haven on the French Riviera, for some of its mobile communications.

Since the war ended in 1999, the international community has spent about €4 billion on this small country. Kosovo has virtually no industry -- even onions and garlic have to be imported from China. Most people survive on remittances sent home from Kosovars living abroad. And the mismanagement continues, even within the UN administration. In one example, the government is now building a highway to the Albanian capital Tirana, a major project for which the contract was awarded to the US consortium Bechtel-Enka. Under the current arrangement, Kosovo is expected to pay twice the market price for concrete, sand and gravel.

Kosovo's misery is considerable, and there is massive frustration among its population. It is a young country -- half of its population is under 30 years of age.

Kurti, the young opposition leader, isn't the only one who says that the direction of politics in Kosovo is a generational issue. Edita Tahiri, the deputy prime minister, agrees.

Tahiri, 55, is sitting behind a wall of opaque glass in her office in the government building. Her Harvard diploma is displayed in a gold frame on the wall, next to a copy of the country's declaration of independence. She says: "We were the ones who fought the war and brought freedom to Kosovo." There is more to politics than just criticizing others, she adds. For Tahiri, the old coordinates are still valid, namely that Kosovo's goal should be NATO membership and that the United States is the country's only reliable partner. The question of self-determination does indeed seem to be a generational one.

Not far from the government building in Pristina, there are two graffiti messages sprayed onto a wall. The first reads: "Vetevendosje! is the future."

Next to it is a second message. It is slightly faded, but still legible. It reads: "Tito, we miss you."