The German central bank, the Bundesbank, will have a central role in this week's Federal Constitutional Court hearing on complaints filed against the permanent European bailout fund known as the European Stability Mechanism (ESM) and the bond purchase program of the European Central Bank (ECB). It makes clear in its written statement that the bond purchases announced by the ECB are "to be judged critically."

In doing so, Bundesbank officials are deliberately ignoring the fact that the budget deficits and debt levels of the aforementioned three countries are in some cases considerably higher than in the crisis-hit nations of the euro zone. The "high creditworthiness" doesn't reflect budgetary discipline there. Rather, it stems purely from the fact that the central banks in question opted for large-scale bond buying to give a clear signal to market participants: the US, Japan and the UK will never suffer a liquidity problem in the bond markets.

The Bundesbank also questioned the central line of argument of the ECB, which mainly justifies its bond purchase program by saying that the monetary transmission process in the euro zone has been interrupted. The Bundesbank gives a very good description of how such a disruption can be diagnosed. It depends, the Bundesbank writes, on whether the financing conditions in the real economy move in harmony with the ECB's leading interest rates. Which would mean in practice that companies throughout the entire euro zone could obtain bank credit at comparable interest rates.

But since the crisis broke out, this has no longer been guaranteed in the debt-plagued member states, where the ECB's interest rate cuts haven't arrived. Instead, interest rates have even increased in some cases, or at least have not fallen, despite the bad economic situation and the restrictive fiscal policies. As the Bundesbank refrained from citing any empirical evidence in its statement, it appears to have missed the fact that the disruption it defined in no uncertain terms clearly exists.

The Bundesbank also made the astonishing argument that it's not the task of central banks to remove such a disruption when it occurs. This, it argued, even applies when market participants speculate on the collapse of the monetary union. The necessary support measures must be decided and shouldered by national governments and parliaments, it said. Has the Bundesbank forgotten that the national governments surrendered all their monetary policy powers to the ECB when they joined the currency union? No country would be able on its own to effectively stop capital flight triggered by speculation that it's going to exit the monetary union.

Overall the Bundesbank's statement gives an impression that it's relatively relaxed about the risks of the monetary union falling apart. While the Bundesbank devoted many pages to the inflationary risks of purchasing government bonds, you don't find a single world about the dangers that would arise if the ECB were to cancel its purchasing program.

If the monetary union were to break up in an uncontrolled way, the dangers for Germany in particular would be enormous. In addition to the economic downturn that would result from such an event, there would almost certainly be a massive appreciation of the new deutsche mark or whatever the German currency would be called.

On the whole, reading the Bundesbank's statement leaves the impression that the authors' line of argument may not be entirely free of self-interest. Amid all the uncertainty about monetary policy transmission mechanisms, there can be no doubt that no institution would benefit more from the break-up of the monetary union than the Bundesbank.

It would revert from being a simple member of the Euro System, formally as powerful as the central bank of Malta with just one of 23 votes in the ECB's Governing Council, to Europe's mightiest central bank by far. 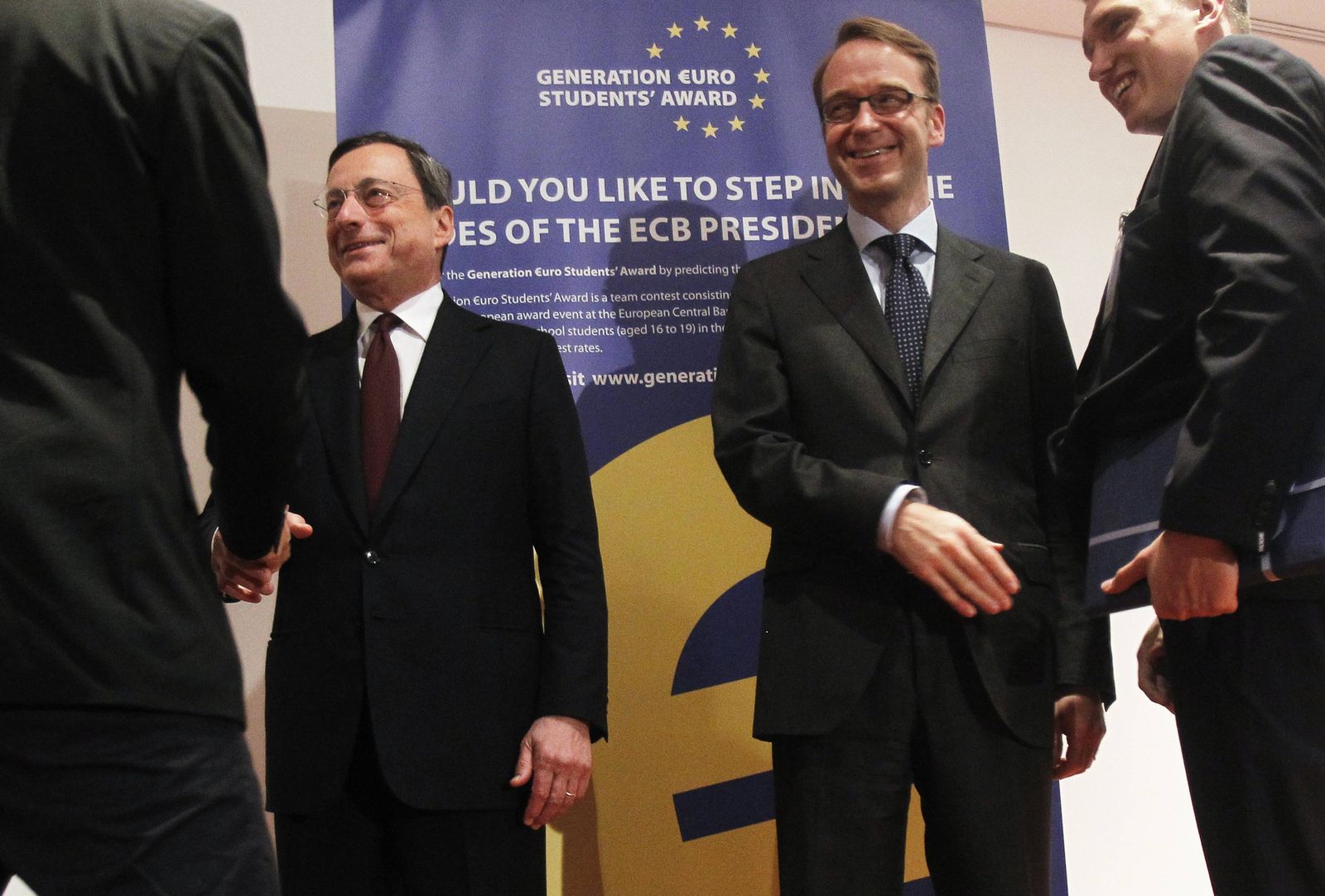