More asylum-seekers than ever before are expected to arrive in Germany this year. How can politicians, government authorities and normal people best handle the massive influx? In an interview, the president of the German Federal Office for Migration and Refugees, Manfred Schmidt, calls for tougher measures to lower the number of asylum-seekers from the Balkans so as to be able to help people fleeing wars or persecution and are in need of a safe haven. He also offers suggestions on how Germany could provide better support in Africa in order to slow the arrival of immigrants from the continent.

Schmidt says he is convinced German society will be able to integrate the tens of thousands of refugees from Syria who are making their way to the country.

SPIEGEL ONLINE: Mr. Schmidt, more and more refugees are coming to Germany. You have estimated there will be 800,000 asylum applications this year, a figure that is four times greater than last year and a significant increase over initial forecasts from earlier this year. Will this figure continue to rise?

Manfred Schmidt: That's difficult to say. Whether we have similarly high numbers next year will depend on if we succeed in lowering the influx from Balkans countries like Serbia and Albania. People who come from this region are almost never recognized as refugees or as being eligible for asylum. But they also represent around 40 percent of all current asylum-seekers in Germany.

SPIEGEL ONLINE: What trends are you identifying with the Syrian refugees? Hundreds of thousands of Syrians are currently in Turkey waiting to make their way to Central or Western Europe.

Schmidt: Thus far in 2015, Syrians have comprised the largest group of asylum-seekers in Germany. The reason the Interior Ministry increased its forecast so dramatically is because of the sheer number of Syrians and Iraqis who have made their way to Germany over the Aegean Sea during the summer months. It is likely this figure will grow. The situation in transit countries like Turkey and Lebanon is deteriorating and the Syrians' sense of hopelessness is growing as well. Many Syrians who fled to neighboring countries had hoped to return. But now they are seeing the situation in Syria become worse and worse. Nor do they see any opportunities in Lebanon or Turkey. Many children haven't had the possibility of going to school for years now. A lost generation is starting to grow up there. The result is that people now want to go to places where they feel they have the chance to build a life. In addition, an estimated 200,000 family members from Syria are also expected to be given the right of residence in Germany in the coming years.

SPIEGEL ONLINE: There has also been an increase in the number of people arriving from sub-Saharan Africa recently, many of whom are coming due to economic despair. It is estimated that Africa's population will almost quadruple by 2100. Are African refugees going to become a greater issue in Germany?

Schmidt: We have to differentiate very clearly here. On the one hand, you have asylum-seekers from countries like Eritrea or Somalia who have fled for political reasons. Or Nigerians who are escaping the Islamist Boko Haram militia. On the other hand, you have a large number of people from other West African countries who have left because they want a second chance. They don't see any opportunities for building a life in their country for economic reasons and want to come to Europe or Germany to work and provide support for their family back in Africa.

SPIEGEL ONLINE: The situation there didn't just suddenly grow difficult a few years ago. Can you explain the current surge in refugees coming from the region?

Schmidt: The world has become a lot smaller in the last 20 years. People have greater access to information thanks to the Internet and mobile phones. So word gets around that Germany is the economic engine of Europe, that workers are being sought here and that it's a safe and orderly place. If you speak to refugees, they sometimes talk about things that are, for us, so self-evident that we take them for granted. One man said to me: "We think it's great that you have red lights and people stop when they see them." Our reputation abroad is much better than we think.

SPIEGEL ONLINE: What opportunities can Germany provide these refugees?

Schmidt: We must convey to these people that the asylum system is not the correct path to Germany for them. We also need to make it clear to the African countries that there are legal ways of emigrating to Germany as a laborer -- in industries, for example, where there is a shortage of workers, like nursing care and health services. A training agreement with African countries is also conceivable. However, it is also unrealistic and nonsensical for West Africa's entire potential labor force to come to Germany. As such, we need to continue investing in these countries so they can build their own solid structures.

SPIEGEL ONLINE: The number of refugees coming in from the Balkan countries is continuing to climb slightly, despite all the campaigns and other efforts that are intended to make clear to people that they stand no chance of securing asylum in Germany. What can be done to counter the influx?

Schmidt: Several measures need to come together. We of course need rapid proceedings, and then we need to carry out deportations more quickly. Finally, we need to adopt legal measures -- for example a re-entry ban for people whose applications have been rejected, as a law that has just come into force makes possible. We also need more judges, because around half of all asylum decisions for people from the Balkans are contested and must then be heard in court. But the example of Kosovo shows that quicker proceedings can be effective. In February 2015, up to 1,600 people arrived here from Kosovo daily. The number has since shrunk to 60.

SPIEGEL ONLINE: The mayor of the city of Erfurt, who is a member of the center-left Social Democrats, has called for children from "safe countries of origin" to not be allowed to attend German schools until a decision has been made on their asylum applications. Are the weakest to be made to suffer the most?

Schmidt: At first, it sounds a little cruel. At the end of the day, though, I don't know what is worse for the children: to be led to believe they will be allowed to stay here and to integrate them into a class for three months only to then turn around and send them back to their home country? Or to make clear to them from the very beginning that it is highly unlikely they will be able to stay here? Ultimately, I think the proposal makes sense.

SPIEGEL ONLINE: You have also proposed that cash benefits for asylum-seekers from the Balkans be eliminated. Why?

Schmidt: We need to seriously consider such a measure for safe countries of origin. Some of the people from those places are telling us that they can finance themselves back home for up to a year with the money that we provide them within three or four months. That would apply, for example, to a family of five from Albania who, in three months' time -- in addition to the clothing, food and toiletries they are given in their free initial accommodations -- are provided with over €1,600 ($1,795). The average monthly salary in, for example, the rural regions of Albania is €200 a month. So it appears that the cash is an incentive that is contributing to people coming here, even though they almost always have to leave.

SPIEGEL ONLINE: But quicker decisions in asylum proceedings could also ensure that these people aren't provided with months worth of pocket money.

Schmidt: Is it better to retain this incentive and to first allow a family of five to move here and then to very quickly send them back than to get rid of this pull factor in the first place? I don't understand the logic here.

SPIEGEL ONLINE: There are currently around 250,000 asylum applications that have not yet been processed in Germany -- and hundreds of thousands more will soon be added to the stack. How do you intend to process them all?

Schmidt: New decision-making centers will be created in several cities and thousands of new employees will be hired this year. And in 2016, we will hire up to 1,000 more. The effect has already become noticeable. By July, we had processed more applications than during all of 2014. We assume that we will be able to make up to 200,000 more decisions during the next six months.

SPIEGEL ONLINE: How many refugees can Germany still take in?

Schmidt: When it comes to the absorption of people who are fleeing persecution and require protection, there can be no upper ceiling.

SPIEGEL ONLINE: Are we prepared as a society to integrate so many Syrian refugees?

Schmidt: Yes, I am convinced of this. The German people are getting involved in tremendous ways. For every incident such as Heidenau (where an anti-refugee riot recently broke out), there are 100 or 200 people volunteering (to help refugees) to counter it. Incidentally, the Syrians I have met take the opportunity they have in Germany very seriously and are making a great effort. They know that their new lease on life is beginning.

SPIEGEL ONLINE: Attacks on refugee hostels are taking place almost daily at the moment. Have you been surprised by the scale of xenophobia?

Schmidt: After the xenophobic riots of the 1990s, I had hoped that we had put this dark period behind us. Unfortunately, that isn't the case. The experience we've just had in Heidenau is with criminals who you can only deal with using the means of law enforcement. However, I am certain that the vast majority of society is much further along than it was back then. It also occurs to me very frequently that the issue, as a whole, is a very emotional one. Images of refugees are very powerful. When they show young men, for example, many react in a defensive way. But as soon as children and families are seen in the images, levels of compassion increase enormously.

Manfred Schmidt, born in 1959, obtained a doctorate degree in law and has been the head of the German Federal Office for Migration and Refugees (BAMF) in Nuremberg for the past five years. Previously, he served in different capacities in the Federal Interior Ministry. Among other things, BAMF is responsible for approving or rejecting asylum applications as well as facilitating the integration of immigrants in Germany. 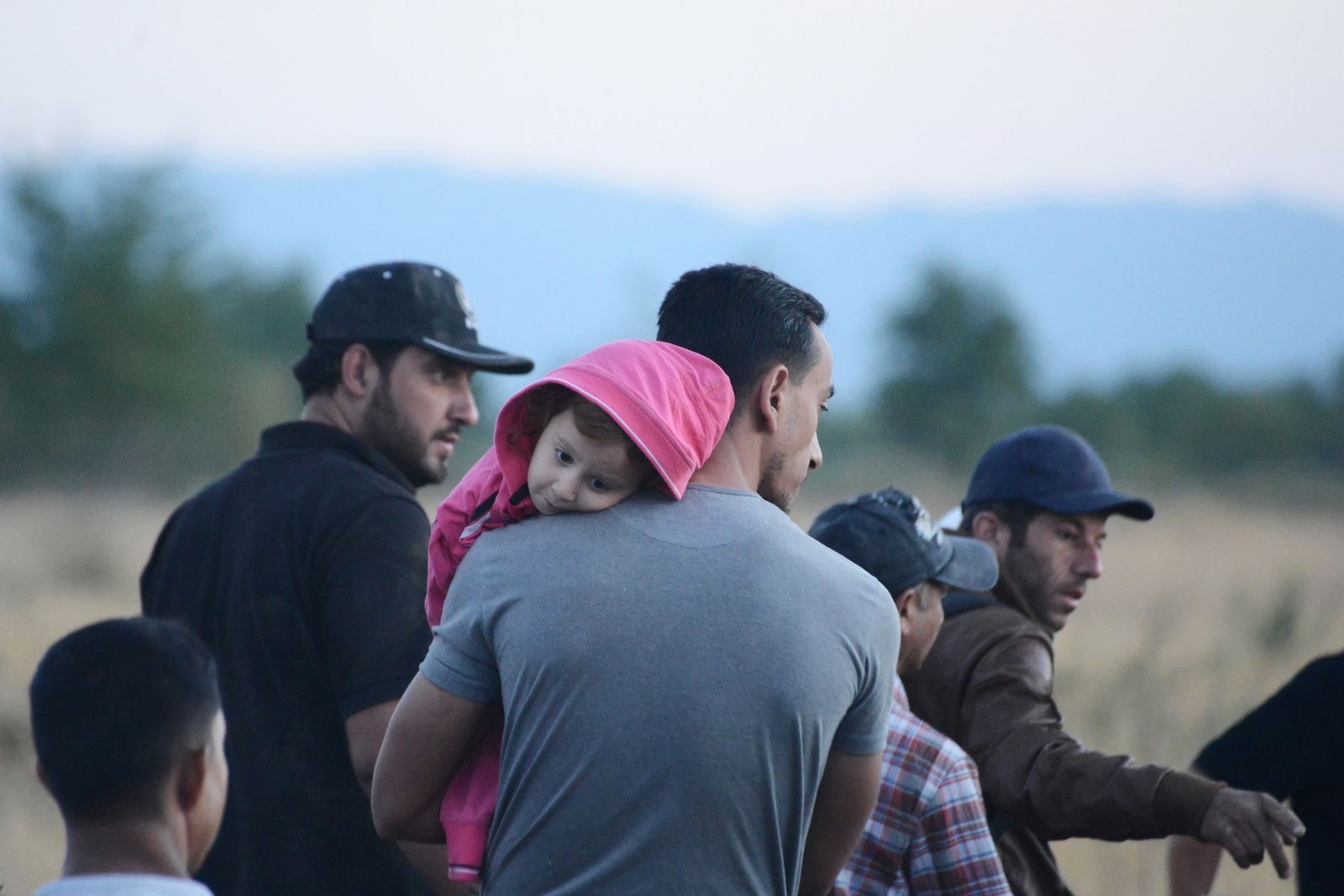 Syrian refugees in Turkey wait for a new life in Europe. 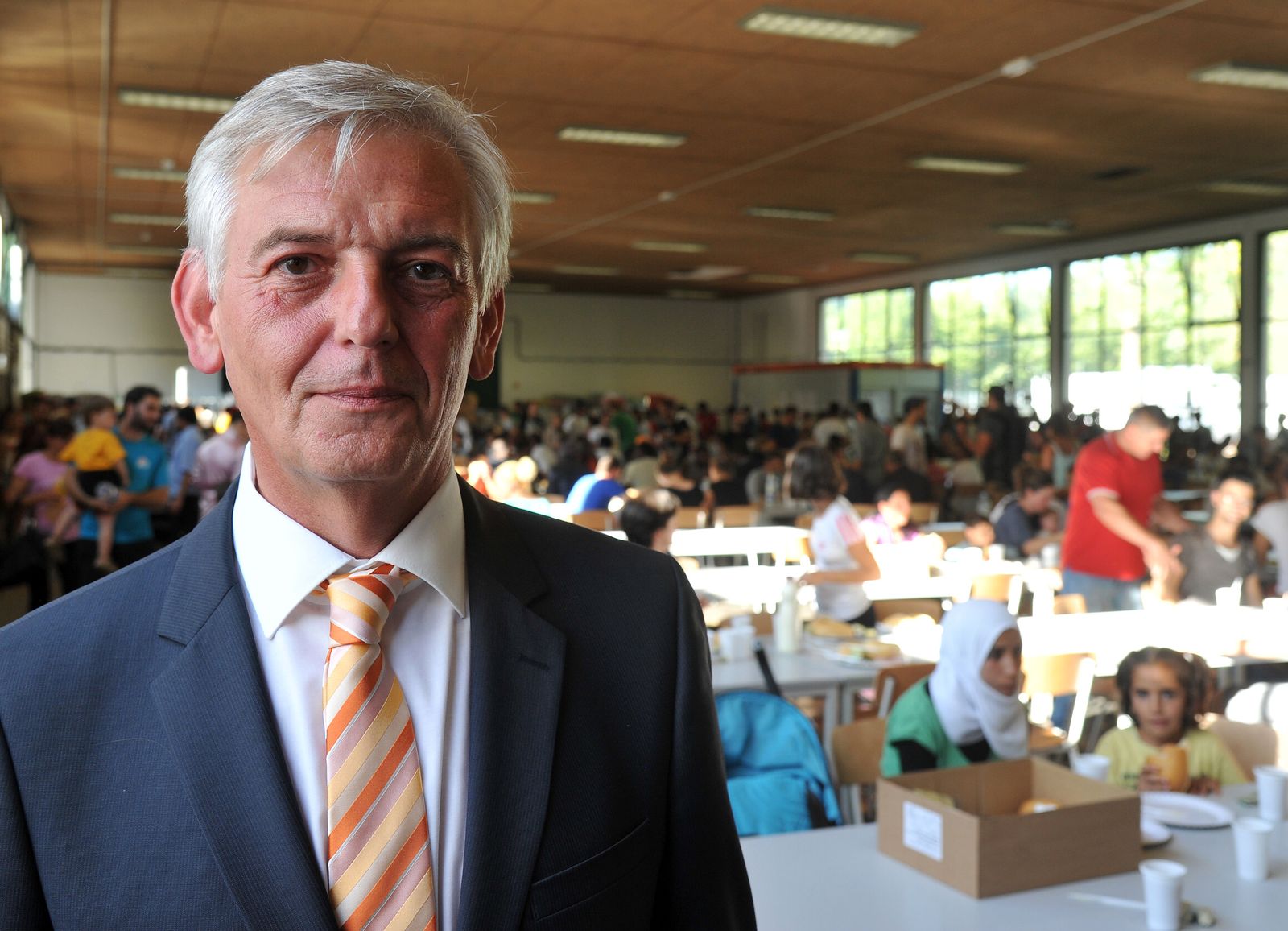