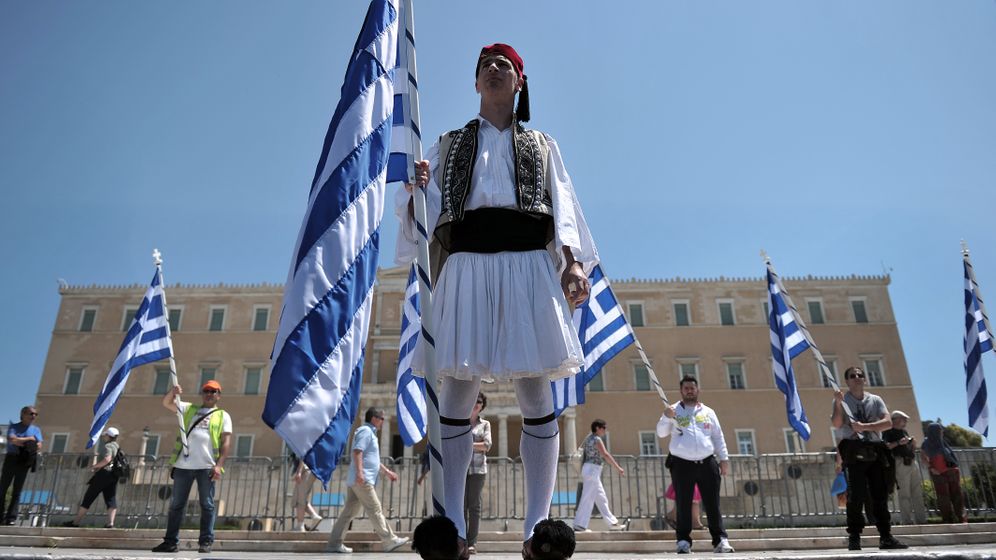 Photo Gallery: Slashing Jobs to Save a Nation

Appearances are deceiving on Klafthmonos Square in downtown Athens. Three imposing bronze statues, the "Monument to National Reconciliation," shimmer in the bright spring sunshine. But demonstrators at the base of the monument bring to mind the original purpose of the square, the name of which translates into "Lamentation Square." Until 1911, when the Greek constitution guaranteed all civil servants jobs for life, government bureaucrats who had been let go after a change in government used to come to the square to publicly express their outrage.

In the current crisis, no one has a job for life anymore, not even in the public sector. The government plans to slash at least 4,000 jobs by the end of the year and an additional 11,000 next year. Without this assurance, the so-called "troika" -- comprising the EU, the International Monetary Fund and the European Central Bank -- would have refused to disburse the next tranche of aid money to Greece in the amount of €7.5 billion ($9.6 billion) by June.

Government agencies are expected to slash some 150,000 jobs by 2015, representing roughly one-fifth of Greece's enormous public sector. Kostas Tsikrikas, the head of the powerful union representing civil servants, is already threatening the government with a "fight to the bitter end."

His rage is directed primarily at Antonis Manitakis, 69. Last May, after efforts to form a new government failed, Manitakis joined the transitional government of nonpartisan technocrats for a few weeks. After new elections in June, the smallest coalition partner, the Democratic Left, nominated the professor and renowned constitutional expert to be the minister of administrative reform.

Now Manitakis is grappling with the Herculean task of reducing the size of the grotesquely inflated administrative apparatus. "I want to give my country honor and dignity once again," he says. "I want to be able to tell my grandchildren one day that there are still dreams and values for them."

But until then, the top official in the civil service will have to get rid of thousands of employees, such as teachers on very small islands like Astypalea and Kastelorizo, where there are 15 teachers for 18 students. "The Greek people are responsible for their fate, and they must understand that only they can rectify problems like these," says the minister. But even Manitakis isn't quite confident enough to embark on large-scale layoffs yet.

Manitakis, a lawyer by training, is sitting in his office. He is a likeable elderly man in a gray suit, surrounded by dark, heavy furniture. He doesn't resemble the standard Greek politician. He hardly ever attends public events, preferring to keep a low profile, and he doesn't like to talk to journalists. In fact, it took him 10 months after coming into office to give his first interview.

Manitakis is committed to his causes. In the 1960s, he fled from the military dictatorship that controlled Greece at the time and went to Brussels to study. After the fall of the junta, he returned to Greece, where he initially supported Eurocommunism. For decades, he remained true to his liberal, leftist worldview.

Nevertheless, angry civil servants now mention his name in the same breath as the neo-Nazis, who are terrorizing the streets in the vacuum created by the crisis. Fellow professors, like constitutional law expert Giorgos Katroungalos, accuse him of having made a "deal with the devil." As Katroungalos puts it: "Deals with the devil always end badly, just not for the devil, and not for the troika, either."

All Power to the Creditors

Despite this criticism, Manitakis himself has a low opinion of the troika's austerity commissioners, and yet he staunchly defends the rest of Europe, which gave him asylum and an education. He praises the French experts on the EU task force who are helping him restructure Greece's public administration. He also has no harsh words for the Germans, a rare stance in Athens these days.

But Manitakis does complain about "horrible experiences in the negotiations with the troika, which I will remember for the rest of my life." He says that he had to learn "to understand that I must act as the representative of a bankrupt country, and that I am dealing with the representatives of the creditor nations, which have all the power."

He is slashing jobs, which is something Europe ought to respect. "The Greeks have to regain their self-confidence, and it's time to put an end to the humiliations," says Manitakis.

He constantly tells his civil servants that only those who have violated their oath of office, aren't doing their jobs, are performing poorly or obtained their jobs for life with fake documents will be let go.

But he will hardly be able to keep that promise, especially when dealing with organizations like the Kopais Lake Agency. It was established in the 1950s to drain a lake in southeastern Greece. The work was completed in 1957, but the office continued to employ a staff of three dozen civil servants for the next 55 years, although no one knows what exactly they did. Some 197 of these kinds of positions have already been eliminated, and hundreds more are expected to follow.

Another trouble spot is the so-called "labor reserve," to which 25,000 civil servants have been assigned, at reduced salaries and with the expectation that they will eventually be transferred to other jobs. But Europe's overseers expect that most of these positions will soon be eliminated.

Manitakis would rather use the reserve as a holding area for qualified civil servants who have become redundant at agencies like Kopais but could possibly be used in other government posts in the future. He hopes to achieve a real reduction in the government workforce through retirements, instead.

Some 32,000 civil servants retired last year, and about 90,000 are expected to follow suit over the next three years, Manitakis claims, adding that this could suffice. But it seems extremely optimistic to think that retiring civil servants could account for more than 120,000 of the 150,000 jobs the government plans to cut. Nevertheless, says Manitakis, the troika has accepted his figures. Greece's creditors apparently want to believe that the country is somehow meeting its obligations.