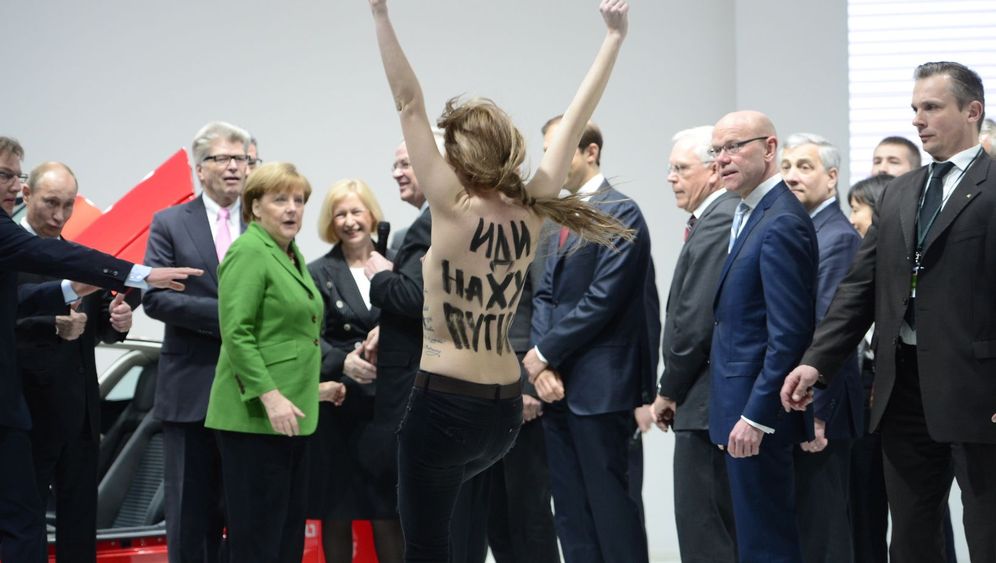 Vladimir Putin might now be dead. "We could have shot him," says Klara Martens. When she and her friends arrived at the venue in Hanover, where Putin was attending a trade fair on German-Russian business, no one searched them for weapons. Martens believes she easily could have smuggled in a gun and taken aim at the Russian president. But that, of course, was not the women's intention. Their weapons of choice are their naked breasts.

Early last week, the photos made their way around the world. As Chancellor Merkel led Putin and his entourage on a tour through the trade fair, five screaming half-naked women rushed the group. The chancellor looked terrified; her staff looked terrified; Putin grinned and gave two thumbs up.

It was Femen's most sensational action on German soil, and it will not be the last. What began five years ago with staged naked protests in Ukraine is now poised to take off in Germany. Femen founder Alexandra Shevchenko has made a special trip to train female German activists. For the past few weeks she has been living in Berlin with Klara Martens. The question remains whether Femen's methods will work in Germany, though.

Two days after the protest against Putin, Martens, 22, sits in a café in Berlin 's Mitte district. She has come directly from a class at Berlin 's Technical University, where she is a third-year engineering student. As the daughter of an East German mother, she was raised with the ideal of the working woman. Martens says she has always been politically minded. She is also ambitious. "Angela Merkel took my dream from me," she says. "I actually wanted to be the first female chancellor."

What is the path of a young, attractive woman in Germany who wants to be politically engaged? First, Martens joined a political party. For several years she was a member of the Greens, but felt the party wasn't making any headway. Work within a party is tedious, says Martens. "It takes forever to reach a position from which you can actually get anything done."

Femen caught her attention in early 2012. Ahead of the European Football Championship, hosted by Poland and Ukraine, several bare-breasted young Ukrainian women launched a series of protests against the demeaning image of women in their country, patriarchal power structures and forced prostitution. On their stomachs were written messages: "Naked War," "Nudity is Freedom," "I Am a Woman, Not an Object." According to their logic, the naked female body should not be a sexual commodity but rather a weapon in the war over power of interpretation.

Martens liked the revolutionary spirit that she saw in the pictures. And she believed in their power. In order to enact political change today, you need media coverage, says Martens, and you're going to get it with naked breasts.

She made contact with the Ukrainians through Facebook and assembled a German group. Today there are some 20 Femen activists in Germany who are learning the strategies from the Ukrainians: how to scream as loudly as possible, how to stand so that your poster doesn't cover your breasts, how to put up a fight with security personnel for as long as possible (heavy legs, lots of wriggling).

In Germany, too, there is plenty to protest against, insists Martens. "The sex industry continues to spread through our society like a cancer," she says. Indeed, pornography has never been as readily available as it is today. It has become a part of everyday life. Pole-dancing courses and bikini waxing for women have long been taken for granted. And television shows like "Germany's Next Topmodel" and "The Bachelor" send a message that for a young woman, success means pleasing jurors, photographers and bachelors -- in short, men. On such shows, says Martens, the women are merely objects: "That's what we're protesting. "

No Longer a Taboo?

One problem, however, could be that in Germany, naked protests no longer break a taboo. As far back as 40 years ago, women went topless through the streets to fight for their rights. Back then, the logic may have worked, to transform from victim into perpetrator through self-determined nudity. But what about now, in the Germany of today, when the tabloids are filled with naked breasts and even yogurt commercials are made to be titillating? In this over-sexed society, is the political message of the activists actually reaching public awareness? Or in the end is Femen really just offering up a few more pictures of beautiful women's breasts?

"It obviously can't last forever. I can't work with Femen for the next 60 years," says Martens. But not because of fading looks -- Martens says that one of her friends who researches protest movements has talked to her about the half-life of such activities. "The attention span for this kind of protest is, at most, two years," she says. After that, you have to become more radical -- or more serious.

At present it seems unlikely that Klara Martens will pick up a gun in two years. According to her current plans, in 2015 she will be receiving her master's in engineering -- a rather serious field of study.