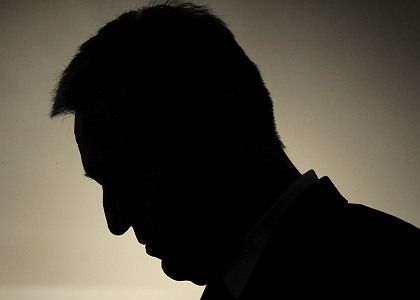 The silhouette of Mirek Topolanek is seen during a press conference Tuesday. The Czech prime minister has lost a no-confidence vote.

Mirek Topolanek's government was already in limbo from the first day it took office. After Czech parliamentary elections in the summer of 2006, no party had a majority and it took months before a coalition between Topolanek's conservative-liberal ODS, the Christian Democrats and the Green Party could finally take shape. On top of that, the government was forced to rely on two renegade voters from the Social Democratic opposition in order to pass legislation in parliament.

On four occasions, the leftists of the Social Democrats (CSSD) and the Communists pushed for no-confidence votes in a bid to force Topolanek out of office. Each time, the experienced tactician barely managed to circumvent the worst for his government.

But the fifth time, on Tuesday, he finally failed. Europe is dismayed. In the midst of a serious economic crisis, of all times, the political classes in Prague have managed to relegate the current president of the European Council to lame duck status.

"Our position in negotiations could now be weakened," Topolanek meekly conceded. And that's not just within the EU. Prague is also currently engaged in talks with Washington over the issue of whether US President Barack Obama will continue to support the contentious missile defense shield pushed by his predecessor. The weapons defense system's radar shield is supposed to be installed on Czech territory.

In fact, the Social Democrats had pledged a truce with Topolanek during the country's term at the helm of the European Council. But on Tuesday, the temptation became too great to resist. At the beginning of the month, Topolanek's coalition suffered a serious setback when two Green members of parliament left their parliamentary groups and the time to strike was nigh. On Tuesday, the two dissidents voted with the opposition.

Whether or not the Social Democrats will be able to celebrate their triumph, though, remains questionable. "The Czech people don't like it and would prefer that we have a cease-fire when we have the presidency of the EU," Czech Foreign Minister Karel Schwarzenberg said. In other words, it is in no way a foregone conclusion that the CSSD will profit from its attack on the government if snap elections are held.

Making an effort to be constructive, Jiri Paroubek, the head of the Social Democrats, has already said that his party would tolerate a Topolanek government for the rest of the country's term at the helm of the European Union.

Whether that happens depends on President Vaclav Klaus, who rules over Prague from the castle overlooking the city. The political scene in the Czech capital is even speculating whether it wasn't in fact Klaus who orchestrated Topolanek's downfall. After all, two ODS members of parliament who are regarded as close to Klaus voted for the censure motion. In any case, Klaus is probably the person who could profit most from the failure of the government.

It is up to Klaus to appoint the new prime minister, who will be charged with putting together a new government. That person could be Topolanek again, or someone who is politically closer to Klaus.

Klaus is a fierce opponent of the EU's Lisbon Treaty, which is intended to streamline decision-making within the 27-member bloc. Klaus co-founded the ODS and determined its EU-critical stance. But recently the party has slipped out of his control a little: Polls have shown that support for the EU has grown steadily among ODS voters in recent years. Topolanek, who is hardly a fan of the EU himself, had bowed to the reality. Under his leadership, and with the support of many in the ODS, the parliament had ratified the Lisbon Treaty in February.

Now the upper house, the Senate, must give its approval. It is unclear how the vote, which is scheduled for April, will go. The ODS holds a majority in the senate. Will these members vote in favor of Lisbon? Or will they, after Topolanek's downfall, listen to Klaus once again and vote against the agreement?

In the end, the document will end up at Prague Castle anyway, where the head of state must sign it: EU opponent Vaclav Klaus.