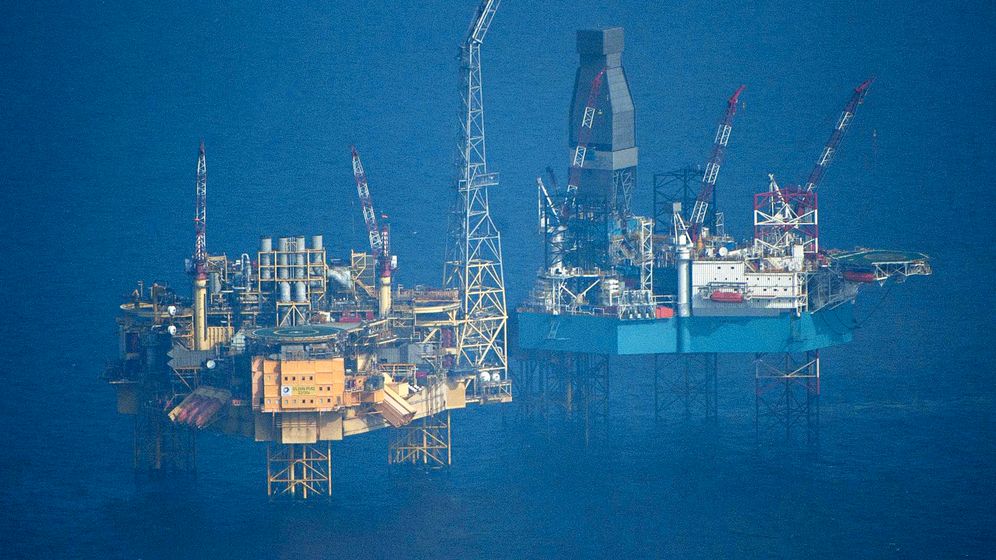 The weather over the North Sea was somewhat rough. What's more, the crew of the small, twin-engine plane was determined to keep its distance from the crisis zone. On Wednesday, a small group of environmental activists boarded the plane to inspect the Elgin platform leaking gas. But given their distance from it, they could only see what their zoom lenses allowed.

Kai Britt, an employee for the German branch of Greenpeace, told SPIEGEL ONLINE that people weren't allowed to get any closer than five kilometers (three miles) from the platform, from which 238 workers have already been evacuated. He was one of four environmentalists who flew from the northern German city of Hamburg, over the western Danish port city of Esbjerg and to the spot 240 kilometers (150 miles) off the eastern coast of Scotland where the offshore platform lies. Britt says that even the four supply ships that could be seen near the Elgin from the plane kept out of the exclusion zone. "They're scared that the thing will blow up around them," he said.

The environmentalist didn't bring back any particularly spectacular photographs from their flight. But the group's observations point to the helplessness that has apparently gripped senior officials at Total, the platform's French owner, since the leak was discovered on Sunday. Although the company finally succeeded in pinpointing the source of the high-pressure leak, it is still far from being in a position to plug it in a reliable way. Some experts are worried about the gas flame in the stack above the platform, which usually burns excess gas. Despite Total's statements to the contrary, the flame is still burning. If worse comes to worst, rising gas clouds could spark a gigantic explosion.

Britt, the Greenpeace employee, said that the flame can't be seen with the naked eye, explaining that this also has to do with the fact that the gas is burned at very high temperatures. However, he said that environmentalists on the plane were able to make out the flame using an infrared camera specifically designed to detect gas leaks. And that's not all. Britt also noted that gas vapors could be seen moving away from the platform. If correct, this supports Total's theory that the open flame creates no immediate threat of explosion -- that is, as long as the weather doesn't change.

At first, there was conflicting information regarding the precise location of the gas leak. But on Thursday Total confirmed reports that the leak was 4,000 meters below the sea floor. They also stated that the gas was pouring out at the deck level of the platform -- in other words, above sea level. However, reports from employees who claimed to see gas bubbling up don't fit well with this picture.

Total is weighing at least three options for dealing with the leak: It could wait things out, bore an emergency relief well or used the so-called "well kill" method, which involves pumping enough cement into the well to cap the flow of gas. Although the last option is quicker, it is much riskier than using relief wells, which could take six months and cost up to $3 billion (€2.3 billion), according to news agency Reuters.

Total says that the leaking gas comes from a well that was plugged about a year ago, rather than from a reservoir from which more gas is supposed to be extracted. That would mean that it is possible that the well could run itself dry in the coming weeks, or so the company hopes.

The Elgin drilling platform stands in 90 meters of water, but the gas fields being tapped are at the considerably deeper level of up to 6,000 meters below sea level. Given these distances, it would take months to drill relief wells. The reservoir is spewing gas at pressure levels of up to 1,000 times that found at sea level and at temperatures of roughly 190 degrees Celsius (375 degrees Fahrenheit). Such conditions have led Norwegian environmental activists to describe it as the "well from hell."