The food was excellent, clearly the product of a gourmet chef. But the conversation was more on the level of a street corner eatery. During a working dinner in the Palais des Festivals in Cannes, France, European Union bigwigs Angela Merkel and Nicolas Sarkozy didn't mince words in talks with Greek Prime Minister Giorgios Papandreou.

When the German chancellor and the French president approached the microphone at 10:30 p.m., it was clear that the three-hour-long meal had not been a relaxing one.

The emergency meeting in Cannes, called on the eve of the G-20 summit to be held in the French seaside town on Thursday and Friday, became necessary after Papandreou called a referendum in Greece on whether the country wants to undergo the belt-tightening measures necessary to receive European Union aid money and to remain in the euro zone.

His announcement came just days after last week's EU summit in Brussels, during which an agreement was reached to slash Greek debt by 50 percent, increase the impact of the euro backstop fund and offer Greece another €130 billion ($178 billion) in emergency loans. Not only did news of the referendum cast doubt on the results of that summit, but it also came as a complete surprise to Merkel, Sarkozy and other EU leaders.

"We made Papandreou ... aware of the fact that his behavior is disloyal," said Jean-Claude Juncker, head of the 17-member euro group, in a Thursday morning interview with German public TV station ZDF. "The euro group would like to have been informed about the intention to hold a referendum at the recent EU summit."

The EU also froze payment of the next €8 billion tranche of the first aid package, passed in early 2010. The payment was set to be wired to Athens in the coming days. Now, it has been made dependent on a "yes" vote in the referendum.

In addition to endangering the European common currency, Papandreou's referendum has thrown his own political career into doubt. He faces a crucial vote of confidence in Athens on Friday and two parliamentarians belonging to his Socialist party have said they will not back the prime minister, according to a report in the Greek TV station NET. Papandreou's government has a razor-thin majority of 152 in a 300-member parliament. Any further defections could mean the end of the Papandreou government.

Europe, though, appeared to have little sympathy on Thursday evening. During the press conference with Merkel, Sarkozy was just as direct as the German chancellor. "We are prepared to help," he said. "That is the foundation of European solidarity. But that also means that Greece fulfils its obligations. We will not allow the euro to be destroyed." He also added: "We must protect the money of our taxpayers."

The comments, in essence, represented the breaking of a taboo. For the first time, the stability and security of the euro were placed above Greece's ongoing membership in the euro zone. The agreements reached in Brussels shall not be tinkered with. And should Greeks vote no in the referendum, the county could exit the euro zone.

"The referendum in essence is about nothing else but the question, does Greece want to stay in the euro zone, yes or no?" said Merkel, ominously.

Coming as it does so quickly on the heels of the summit last week, which appeared to initially calm markets, it is perhaps not surprising that euro-zone leaders are furious. "The decision by the Greek prime minister is crazy," said one Sarkozy advisor about the atmosphere in the Élysée Palace. "Europe's leaders are flabbergasted."

Just how Papandreou will respond to the appeals from Paris and Berlin remains to be seen. His Monday announcement has already sent shudders through the global markets and the jitters are likely to remain until the referendum is held, perhaps as early as the beginning of December.

During the VIP dinner that followed, scheduled "for a time after the markets closed" according to German delegations sources, Papandreou was subjected to what amounted to an interrogation session. It was made clear to the Greek premier that, should the majority of Greeks vote against the Brussels resolutions in a referendum, Athens would have to do without the transfer of billions in aid.

"Giving the people a voice is always legitimate," Sarkozy reportedly said. "But the solidarity of all the euro-zone countries only takes hold when everyone agrees to make the necessary efforts."

Merkel and Sarkozy also emphasized the advantages of the package agreed to in Brussels: Aid to the tune of €130 billion, a debt haircut of 50 percent and support for the recapitalization of Greek banks. Without the bailout package, they warned the Greek prime minister, the highly indebted country would not only be threatened with bankruptcy. Its membership in the euro zone would also be at stake.

Papandreou is now expected to execute the referendum by Dec. 4 or 5. Merkel and Sarkozy reportedly advised the Greek prime minister he should tailor the referendum to be a question of whether Greece should remain a part of the euro zone. It is a likely that a majority of Greeks would vote "yes" if that were the question posed. But the word in Athens is that the Greeks want to put the rescue package itself up for a vote. The bailout is deeply unpopular with Greek voters because of the tough austerity measures it entails.

What has really weighed down the situation, though, is Papandreou's apparent effort to go it alone. The fact that he didn't inform his EU partners of the planned referendum prior to making his announcement "massively changed the psychological situation," Merkel said. Meanwhile, Sarkozy made unmistakably clear: "The Greeks have to decide whether to continue the adventure with us or not. We hope to continue with the Greeks, but there are rules that have to be respected. The Europeans and the IMF can't release the sixth tranche of loans to Greece until Greece endorses the package of Oct. 27," he said.

There is, of course, another reason why time is of the essence. Without EU aid, Greece will run out of money by Christmas at the latest. A "no" by the people, close to 60 percent of whom polls indicate reject the bailout decisions made in Brussels, would be tantamount to an admission of failure. Ratings agency Fitch noted that a rejection of the EU and IMF plan "would increase the risk of a forced and disorderly sovereign default and -- whilst not Fitch's central rating case -- potentially a Greek exit from the euro." The company said both scenarios "would have severe financial implications for the financial stability and viability of the euro zone." 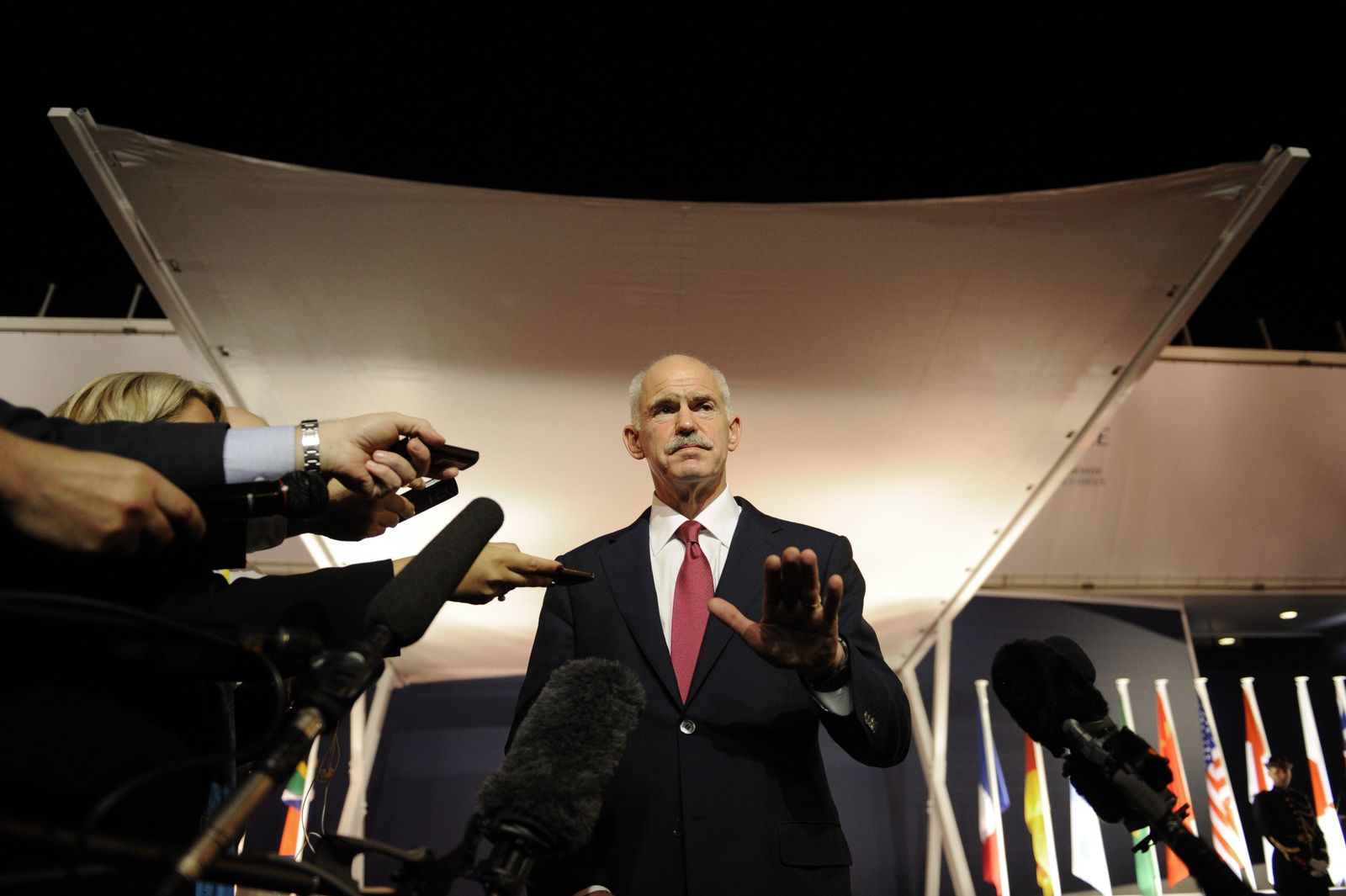