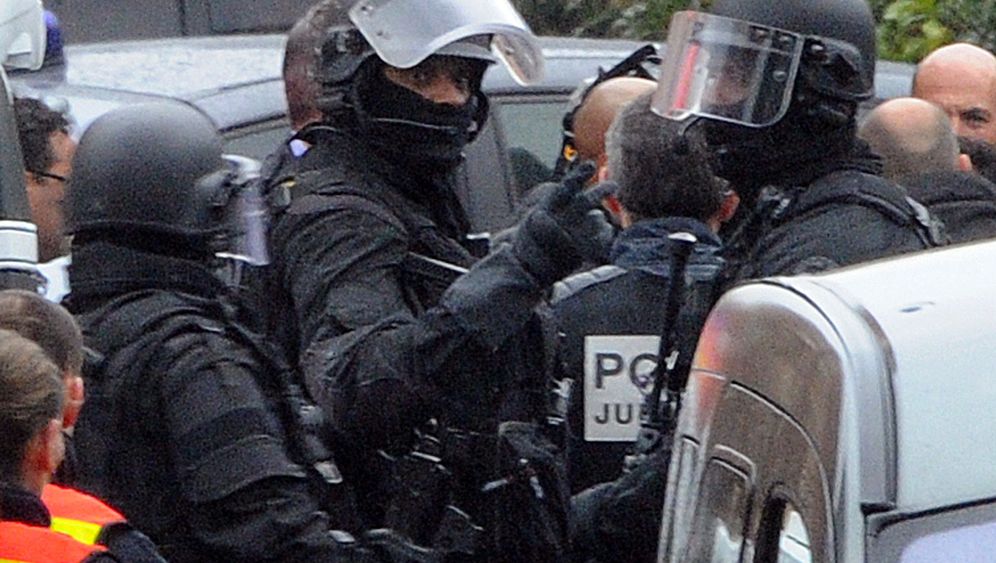 There is a television image that encapsulates the whole surreal hunt for Mohamed Merah, the man who committed a series of murders in Toulouse. Last Wednesday BFM TV, a French news channel, divided its screen in half to convey the full dramatic impact of the events it was covering.

On the left was the video image, filmed from a distance, of the scene surrounding the apartment building where Merah was holed up, a cordoned-off disaster zone with police, firefighters and cameras. Somewhere in that scene was the killer.

On the right side was a video of French President Nicolas Sarkozy attending the funeral for the three soldiers Merah had allegedly killed. The French flag was flying behind him as he faced the coffin. "This man wanted to bring the Republic to its knees, but the Republic did not yield," Sarkozy said.

The candidate had become the president once again, and someone he had rarely been before: a dignified father of all Frenchmen appealing to the nation to pull together. Meanwhile, Sarkozy's challenger, the Socialist candidate François Hollande, stood among the mourners, condemned to silence.

The stories of two Frenchmen, Mohamed Merah and Nicolas Sarkozy, intertwined fatefully last week. The man on the right side of the screen was protecting the nation from the man on the left side, invoking one of the central ideals of the French Republic, "unité," or unity.

An Opportunity for Sarkozy

On the one side was Merah, 23, a petty criminal from a low-income housing project in Toulouse, suspected of brutally shooting and killing three soldiers of North African origin, as well as a rabbi and three Jewish children aged four, five and seven.

On the other side was Sarkozy, the president, who was given the opportunity this week to turn things around before the first round of elections on April 22. The important thing, though, was that no one should notice he was in fact taking advantage of that opportunity.

On Thursday evening, after a sniper had shot Merah in the head following a 32-hour standoff, the election campaign was officially resumed. "These crimes were not the work of a madman," Sarkozy said, but those of a "monster."

There is no doubt that Merah's crimes were monstrous. But the eerie aspect of this case is that the killer, contrary to what the president said, was not a monster. Among the few photos of him that exist, he looks like an ordinary man from the French suburbs, a smiling, handsome young man with a shaved head, who liked cars and motorcycles. His biography, at least at the beginning, reads like the classic tale of someone from his world. It's a place that is home to thousands of young men like him, second and third-generation immigrants living in the suburbs of French cities, often cut off from the rest of society and, as a result, from education and work. Some are men whose anger eventually turns them against the system, albeit not as radically as Merah did.

His parents came from Algeria, and he grew up without a father, living with his mother and four siblings in the low-income housing projects in Toulouse known as the Cités. They are places with names like Bellefontaine and Les Izards, giant apartment-block districts on the outskirts of the major cities, places the rest of the French perceive as threatening.

Problems in the Suburbs

This is why Merah's story is also the story of a French society that still hasn't found answers to the problems of the suburbs, or banlieues. In general, politicians pay little attention to the Cités, except when they are trying to score points with the majority of voters.

When Sarkozy was the interior minister in 2005, he raged against the "rabble" who were setting cars on fire, and suggested that the banlieues be cleaned out "with a Kärcher" (a brand of high-pressure water cleaner). As president, he announced a "Marshall Plan for the banlieues," but nothing came of it.

The banlieues are making headlines once again, as they have for decades. In Marseille, there have recently been battles in broad daylight between gangs carrying Kalashnikovs. A few months ago, a study by sociologist Gilles Kepel reached the conclusion that immigrants and their children are losing a sense of belonging to the French Republic, and that they perceive the promise of meritocracy, that anything can be achieved, as an illusion. The study also found that, as a result, there is growing support for Islamism in the banlieues.

Merah was a "petit arabe," or little Arab, a term still used in post-colonial France today to describe the children and grandchildren of immigrants from the Arab world.

Merah slipped into delinquency at an early age. His crimes began with throwing rocks at a bus, but were soon followed by thefts and muggings, and he had friends who were dealing drugs. Although he started a training program in an auto repair shop, he was sentenced to a year and a half in prison for stealing a woman's purse in a bank.

After trying to commit suicide in prison, Merah was sent to a psychiatric hospital. Doctors recommended prolonged psychotherapy, but he was sent back to prison after two weeks. It was during this time that he apparently began reading the Koran and embarked on a process that the public prosecutor would later characterize as "atypical Salafist self-radicalization."

His problems became even more serious after he was released from prison. When he tried to enlist in the army, he was turned down because of his criminal record. He signed up for the Foreign Legion instead, but then he changed his mind. He did not lead a particularly religious life, continuing to spend time in clubs, flirt with girls and flaunt his BMW.

He traveled to Kabul in November 2010 but was picked up by Afghan police in Kandahar only nine days later. Back in France, he attracted the attention of neighbors when he began carrying a sword in public. He went to Pakistan in the fall of 2011, but contracted hepatitis A and returned after two months. Apparently he was even inept at becoming a jihadist.

He began his vicious and mysterious crimes on March 11. He filmed the killings with a small camera, staging them as if they were part of an action film. His actions were more reminiscent of the July 2011 killing spree by Norwegian far-right militant Anders Behring Breivik than those of an al-Qaida terrorist. But somewhere between Toulouse and Pakistan, he had, for the first time, found a way to inflate the importance of his actions. He used the terrorist network's ideology like the directions to a computer game, killing both Jews and Muslim soldiers who had fought for France.

Merah later told a journalist and the police that he had committed the murders to avenge Palestinian children. Suddenly he was no longer a petty thief but a political terrorist. But there was nothing to suggest that he had acted on behalf of a terrorist organization. Instead, it seemed much more likely that he was a lone perpetrator. Over the weekend, however, police announced that his older brother, Abdelkader Merah, was also a suspected accomplice in the killings, describing him as a "radical Salafist."

Last week, hardly anyone was asking what the story of this young man says about France -- even though it clearly demonstrates that the frequently invoked concept of "unité," a unified France for all Frenchmen, doesn't exist.

Marine Le Pen, the right-wing populist candidate for the National Front, did not interrupt her campaign after the killings, unlike Hollande and Sarkozy. She promptly went on television when it was revealed that the killer was an Islamist -- to constantly remind the French that she was the one who had been warning them all along.

A few weeks before the killings of the soldiers and the Jewish children, the campaign reached a low point when it was dominated by an absurd debate. Le Pen had complained about all of the meat in the Paris metropolitan area being "halal," meaning that it is slaughtered in accordance with Islamic rituals.

Instead of ignoring the issue, President Sarkozy continued the discussion. First he corrected Le Pen' figures, but then he called for regulations requiring halal meat to be labeled. In a television appearance in early March, he said: "There are too many foreigners on our territory."

In the wake of the Toulouse killings, the political world is hardly expected to pay more attention to the causes for problems in banlieues. Sarkozy would like to see a law enacted, preferably before the elections, that makes it illegal to "regularly" visit Islamist websites. Although this wouldn't stop killers like Mohamed Merah, it might impress a few voters.

Polls taken at the end of last week showed for the first time that the gap between the candidates was narrowing. Some even predicted the president being ahead after the first round of elections. Nevertheless, the polls also showed Hollande retaining his edge in the likely runoff election.

The way authorities handled the Toulouse killings now also raises a number of questions. How is it possible that the domestic intelligence service did not take steps to stop Merah earlier? Did the special forces mission, which was intended to capture him alive, really have to end with his death?

Nevertheless, Sarkozy seems to believe he is on top of things once again after last week's events. Following a campaign appearance on Friday, he turned to a journalist with the leftist daily newspaper Libération, smiled broadly and asked: "Still confident?"