When Dutch Transport Minister Karla Peijs appointed Paul Nouwen of all people, it initially looked like she had picked the worst possible candidate for the job. Nouwen was put in charge of coordinating negotiations on the introduction of a road toll. He had been general director of the Royal Dutch Touring Club. As such, he was an avowed opponent of all previous plans for tolls. 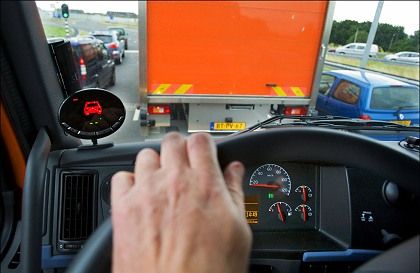 A Dutch truckdriver waits in traffic on one of Holland's many cluttered roads.

It didn't seem very likely that an avowed auto lobbyist would be able to achieve something that had eluded successive transport ministers for over a quarter century. Daily traffic jams have become a major pain. Every morning, 160 kilometers (100 miles) of backups clog Dutch streets; in the evening, it's 180. This costs the economy approximately €1.8 billion ($2.27 billion) every year. But any plan that proposed fighting street congestion with tolls was broadly rejected by each and every segment of the population.

And then came Karla Peijs. In 2004, when she was minister of transport, Peijs arranged talks among 17 groups that would be affected by any changes, including the automobile lobby, employees and employer representatives, local government officials and environmental groups. She appointed Paul Nouwen to head the roundtable talks. The goal was ambitious. "We were tasked with working out a new nationwide plan for road tolls that is simple and transparent and that helps to eliminate traffic-jam problems and reduce their environmental impact," Nouwen recalls.

The results of the talks are remarkable in two respects. First, the roundtable came up with a proposal for a radical toll system that was unprecedented worldwide. Second, the proposal was not discussed to death and picked to pieces in various committees. In fact, it actually found the support of a political majority.

In December 2007, the Dutch government decided it wanted to introduce the system of tolls proposed by the Nouwen Plan nationwide. Parliament approved the proposal in July 2008. Current work is focused on drafting concrete legislation and inviting bids from companies to implement the technical requirements of the toll system.

The Nouwen Plan envisions that each and every type of motorized vehicle will pay for each and every kilometer it travels on Dutch roads. In this way, travel would be calculated according to use -- like electricity or heating.

Taxing motor vehicle traffic according to use could also be achieved through a simple fuel tax without any need for technical investments. But Nouwan regards his model as "much fairer" because it doesn't encourage people to drive across the border to purchase cheaper gas and because it makes it easier to regulate both traffic and environmental problems.

In addition, the tax works on a sliding scale depending on how much pollution the vehicle emits, the time of day and the stretches of road traveled. A person who drives along the main arteries into Amsterdam early in the morning will pay more than a retiree in a small town who takes a local road to the supermarket.

In principle, the toll should also apply to people driving motorcycles and to vehicles registered in other countries. Planners have yet to work out the details of exactly how this will work and how high the tolls will be. Some thought has been given to a system using satellites that tracks vehicles equipped with transponders. The plan envisions an initial phase in which a million Dutch trucks will be fitted with such transponders; a later phase lasting until 2016 includes doing the same with the country's seven million cars.

For Dutch drivers, in addition to its technical implementation, the plan also entails a major mental readjustment -- especially given the fact that the country has never had a single stretch of highway with a tollbooth. Under such circumstances, it's natural to ask how the Netherlands has succeeded in reaching a consensus on an issue that has traditionally led to such heated controversies.

"The decisive thing," says Nouwen, "is that it will replace the levies charged in the form of taxes on the purchase and ownership of an automobile." In addition, the plan envisions expanding public transport to prevent the population from getting the impression it is being fleeced by the government. In the end, the plan calls for the state to not collect any more in total tax revenues than it did before.

But the argument that the plan has no net impact on tax revenue is not, in itself, enough to explain why all the parties involved in the negotiations accepted it. After all, the toll system will lead to a redistribution of wealth. People who drive a lot pay more; and people who drive less pay less. That has been the sticking point of previous attempts to implement tolls.

"When it comes to redistribution, for example on tax issues, policies often end up getting stalled," says Klaus Jacobs, who researches environmental policy at Berlin's Free University. But the Dutch model even managed to get over these hurdles. The plan won over frequent drivers and haulage firms by promising that the increased costs they face will be offset by the time they will save in making their journeys. According to some studies, the toll will lead to a 5 percent reduction in traffic volume, which in turn will translate into a 25 percent reduction in traffic jams.

What might have even been more important for the toll proposal's success than its details, however, is the political style that accompanied its drafting and passage. Instead of being imposed in a top-down way, people collaborated on it at lower levels and made it a bottom-up process. "If you let the people who will be affected be part of the process," Nouwen says, "they can't just sit back and be opposed to things. Instead, they have to work together with you in a constructive way and see what they really want and what is possible." As Jacobs sees it: "That is typical for the Netherlands, where this type of consensus-building has traditionally played an important role in political work."

But Would It Work in Germany ?

So, what does this mean for Germany? This country is also seeing increased pressure to find new ways to channel traffic. In September 2008, the German Institute of Urban Affairs (Difu) in Berlin hosted a seminar entitled "Mobility Management by Environmental Zones and Urban Changing." As part of the seminar, a number of speakers indicated that expected increases in traffic volume will result in major traffic problems that conventional measures won't be able to solve.

In Germany, though, using urban tolls to address such issues is still taboo. "In political terms, that is an extremely touchy issue that the majority of German cities would not dare to implement in a systematic way," says Andreas Kossek, a traffic planner from Hamburg, who has worked as a consultant for committees at the city, national and EU levels. "Traffic planners and committees have discussed and recommended tolls in many countries," Kossek adds. "But politicians haven't been able to push them through. Everybody just stands there staring at each other and waiting for the state to do something about it. Perhaps the Netherlands will be able to provide the jump start we need."