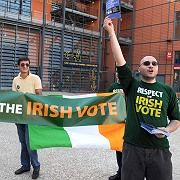 The words were clear: "Europe has powerful enemies on the other side of the Atlantic, gifted with considerable financial means." The speaker was France's Europe Minister Jean-Pierre Jouyet, addressing a pro-European rally in Lyon at the weekend.

He was putting the blame for the Irish rejection of the Lisbon Treaty on some surprising shoulders: neoconservatives in the United States. "The role of the American neocons was very important in the victory of the 'no,'" he said.

A voice of paranoia from old Europe? Perhaps. But the allegations are not exactly new. Those campaigning for a "yes" vote in the Irish referendum on June 12 had made similar suggestions in the run up to the vote.

One of the most powerful groups campaigning against the treaty was Libertas, which describes itself as a "new European movement dedicated to campaigning for greater democratic accountability and transparency in the institutions of the EU." The group had said that its main gripe with the Lisbon Treaty had been that it was anti-democratic and could undermine Irish business interests.

Libertas claimed it spent €1.3 million on its campaign, though its opponents speculate the total might be even higher. In contrast, the ruling Fianna Fail party was estimated to have spent around €700,000 on its "yes" campaign.

There has been much speculation about where exactly the Libertas funding came from. The group's founder Declan Ganley is an Irish millionaire who is also CEO of Rivada Networks, a telecommunications company which has worked with the US military. The company's Web site says that it is a "leading designer, integrator and operator of public safety communications and information technology networks for homeland security forces and first responders."

A member of the center-right Fine Gael party, Lucinda Creighton, said before the referendum that the businesses of Ganley and Ulick McEvaddy, an aviation millionaire who was also involved in the "no" campaign, were "heavily dependent on contracts from the US State Department, the Pentagon and US government agencies." She went on to say: "These men are a lot less concerned about Irish sovereignty than they are about the potential hit to their own personal business interests."

However, Ganley rejected any allegation that US funding was behind his campaign. Before the referendum he told the Irish Independent newspaper: "I am funding it and so are a lot of other people. We have a donations facility online. .. There are some wonderful people that are stepping forward and writing checks."

However, Libertas were forced to admit in the course of the campaign that many of its staff members were on Rivada's payroll.

The "yes" campaign has since urged the group to make its donors and accounts public and has expressed skepticism that Libertas could have raised so much money within Ireland alone.

Comments from a controversial former US diplomat before the referendum have added fuel to the conspiracy theory. John Bolton, the former US ambassador to the United Nations, was in Dublin to deliver a speech on trans-Atlantic relations a week before the vote. He warned that the treaty could "undercut NATO," something that would be a "huge mistake." According to Bolton, known for being one of Washington's most outspoken hawks, if the EU had its own military capability people will think NATO redundant and that Europeans "can take care of their own defense."

While Ireland is not a member of NATO one of the concerns before the vote was that the treaty could compromise the country's long-standing military neutrality. Other doubts that arose related to Ireland's low taxation rate and its ban on abortion.

The "yes" campaign tried but never managed to counter these arguments effectively. In the end Ireland rejected the Lisbon Treaty by 53.4 percent to 46.6 percent on June 13. A result that has since thrown the European Union into disarray. There has been talk of a two-speed Europe or even of kicking Ireland out of the EU if it were to reject a second referendum.

Nevertheless, the latest poll on opinion within Europe shows that Ireland is in fact still the most resolutely pro-European country in the EU. The latest Eurobarometer survey, conducted in April and May, showed that Ireland had a more positive opinion of the EU than every other member state apart from Romania, with 65 percent viewing the union positively, well above the average of 48 percent. And Ireland topped the list of countries which believed they had benefited from EU membership; 82 percent of Irish voters believed Ireland had benefited, compared to an EU average of 54 percent.

There is no doubt that Ireland has done well out of EU membership, although other factors such as low taxation, high investment in education and a record of good labor relations, also helped fuel the period of sustained growth. According to figures released by Eurostat on Tuesday, in 2007 Ireland had the second-highest gross domestic product (GDP) per capita in Europe -- almost one and a half times the EU's average.